Another impressive victory for the undefeated Riakporhe! Fight card review 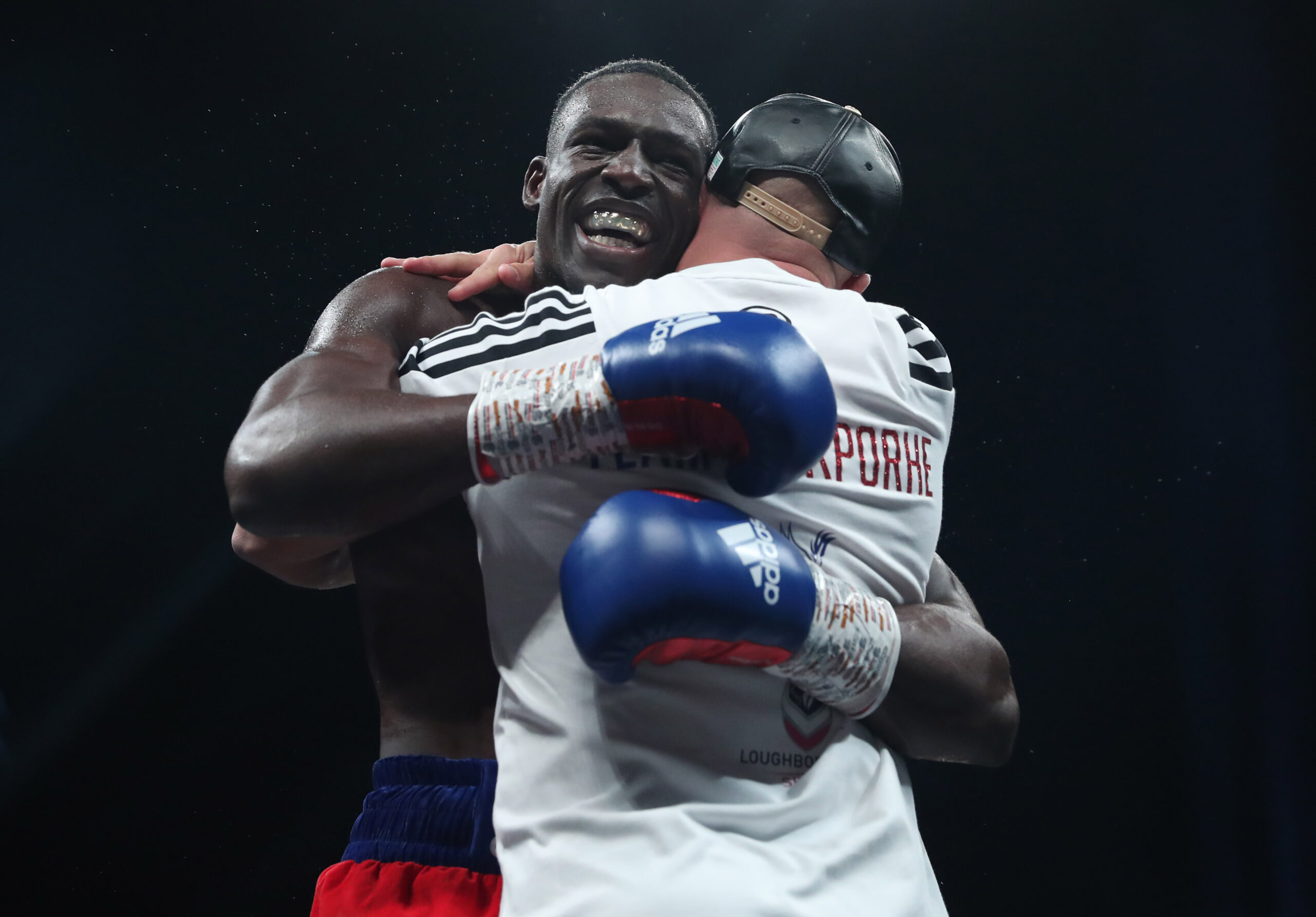 REVIEWING THE ACTION AT WEMBLEY ARENA:

Wembley Arena played host to an emphatic performance by British cruiserweight Richard Riakporhe as he blasted through Nigeria’s Olanrewaju Durodola to move one step closer to a potential world title shot.

Sky kicked off the night on the Sky Sports Boxing YouTube channel, first featuring undefeated super-middleweight Germaine Brown, who impressed over six fast-paced, competitive rounds against an aggressive Ondrej Budera. Brown consistently demonstrated a spiteful jab, regularly following it up with punishing right-hands and left-hooks to head and body, moving to 11-0 now as a pro. Two-time world title challenger Natasha Jonas also returned to the ring, emerging victorious over Vaida Masiokaiteover six two-minute rounds. Jonas was on the wrong end of a very close points decision to Ireland’s Katie Taylor last time out and looked comfortable throughout, often damaging Masiokaite with regular flurries from the southpaw stance. Jonas will nowseek a third shot at world honours in 2022 after failing controversially against Terri Harper last year and then to Taylor in May.

Hassan Azim, who makes up one half of the promising Azim brothers trained by Shane McGuigan, made his professional debut at welterweight with an emphatic first round stoppage of Ivan Njegac. Azim immediately found his range behind a stabbing jab which he quickly followed up with a straight right hand that sent Njegac to the canvas. The Croatian failed to beat the count and Azim’s professional debut was over inside sixty seconds.

Cruiserweight Mikael Lawal maintained his undefeated record with a highlight reel knockout in his fifteenth fight against the Italian Leonardo Damian Bruzzese. Lawal had looked impressive for the first four rounds of the contest, sending Bruzzeseto the canvas twice in the second with a brutal left hook and then a clubbing straight right hand, the Italian doing well to survive the round. More punishment ensued from Lawal and the fate of Bruzzese was sealed in the fifth with a stunning overhand right in the final ten seconds that left the Italian in a heap. There was little point in Marcus McDonnell issuing a count and Lawal moved to 15-0, with nine victories coming by knockout.

The main broadcast started with an emphatic second round knockout for Shane McGuigan’s lightweight prospect Adam Azim. Following in the footsteps of his aforementioned brother Hassan, Adam demonstrated lightning hand speed from the off, landing punishing left hooks to the head and body of Stu Greener. In the final seconds of the first round, Greener found himself on the seat of his trunks following a sharp Azim right hook. Greener complained the shot landed to the back of his headbut his complaints landed on deaf ears, with things about to get worse. A right-hand in the opening moments of the second round left Greener on the canvas again, this time the referee waving it off. It was an emphatic statement, with both Azim brothers impressing with early knockouts on the big stage. Big futures are ahead for both.

The British Light-Heavyweight title was on the line in the next televised bout between former British champ Hosea Burton and the undefeated Dan Azeez, who put on a career-best performance to stop Burton in the final minute of the seventh round. Azeez had dominated from the off, regularly finding the chin of Burton with the jab before stepping forward and knocking Burton’s head back with right hands over the top, a shot he could not miss with all night. Hosea was never able to settle and get the respect of Azeez he sought to stop the Lewisham man from closing the distance and exerting himself on the inside. At the midway point Hosea seemed to be running out of ideas, reluctant to let his hands go out of fear of what might come back and understandably so given the excellent counterpunching displayed by Azeez throughout.

The pivotal moment came about towards the end of the seventh round, with Azeez again landing the right hand over the top before following it up with a spiteful straight left which hurt Burton, trapping him in the corner as pummelling uppercuts and short left-hooks sealed his fate. Nothing was coming back in return from Burton and the referee had no choice but to step in and wave the fight off. Burton was bloodied, bruised and beaten, while Azeez added the British title to his Southern Area and English straps at 175lbs in just his fifteenth fight.It is he who has now added his name to a growing list of mouth-watering potential matchups at light-heavy, the likes of Anthony Yarde, Lyndon Arthur, Callum Johnson, Joshua Buatsi and Craig Richards potential suitors in a flourishing domestic division. The plot thickens as the battle to determine the best 175lb man in the country takes another intriguing twist.

Heavyweight Nick Campbell secured the fourth knockout of his professional career in as many fights against Swindon journeyman Phil Williams. Campbell had Williams down midway through the opening round after a hard right-hand slammed against the temple of Williams, tumbling him to the canvas. The Glasgow-born heavyweight grew frustrated with consistent holding by Williams in the second, who showed little interest in engaging due to the power of the man in the opposing corner. The third saw the end of the fight following another hard right-hand which caught Williams flush on the chin and again left him on the floor. The expression on Williams’ face told you all you needed to know, shaking his head as referee Marcus McDonnell neared the end of the ten count before finally waving the bout off. The understandably raw Campbell should be pleased with the knockout as he followedin the footsteps of the likes of Fabio Wardley and David Adeleye in stopping Williams as he continues to develop early on in his career.

Saturday’s main event saw London’s Richard Riakporhe step-up in a WBC cruiserweight eliminator against Nigeria’s Olanrewaju Durodola. Riakporhe was more than ready for a man who went seven rounds with WBC champion Ilunga Makabujust over twelve months ago, halting Durodola at the start of the fifth. The jab of Riakporhe was prevalent from the start, regularly rocking back the head of Durodola, often followed up by punishing right-hands which seemed to buzz the Nigerian almost every time they landed. Riakporhe enjoyed similar success over the next few rounds, occasionally following with right uppercuts that stung the chin of the forty-one-year-old African. However, it was a sharp, damaging left-hook in the opening seconds of the fifth which sent Durodola to the canvas and provided the opening for the stoppage to ensue. As soon as the fight resumed, Riakporhe stepped onto Durodola, unleashing hard right hooks and uppercuts to the Nigerian’s chin with nothing coming back in return, leaving referee Victor Loughlin with no choice but to halt the fight with a large portion of the fifth remaining.

It’s another impressive victory for the undefeated Riakporhe to add to his resume as he moves one step closer to a shot at a world title in the next twelve months, starting the evening ranked number ten with the WBC compared to Durodola’s place at fourth. Various options are now open for the London-born cruiserweight, including a big domestic clash and rematch with European cruiserweight champion Chris Billam-Smith, who is three places above himwith the WBC at seventh. Both appear to have improved substantially since their initial showdown back in 2019 where Riakporhe edged the Bournemouth man on the cards, and a prequel would certainly provoke considerable intrigue among fans, especially given the fan-friendly style both fighters possess. Whether or not the fight can be made is a different story however due to both fighters now being signed with opposing promotions and TV broadcasters, and given the high risk, low reward nature such a bout would present for both men it may be unlikely the fight gets made next. Regardless, Riakporhe continues to make considerable strides as he marches towards the world level and providing he remains active over the next few years, who knows just how far he can go.

Saturday evening concluded with popular Albanian welterweight Florian Marku comfortably outpointing France’s Jorick Luisetto over eight rounds. Marku dominated the affair, with the 78-75 scorecard of referee Bob Williams arguably generous in favour of the Frenchman. Many of the rounds were indeed competitive with Luisetto more than playing his part, both men clearly coming with ambitions to win. It was the cleaner work of Markuwhich saw him run out a deserved winner, showing good punch variety with a solid jab backed up by hooks to head and body. Luisetto demonstrated a solid chin throughout and regularly fired back with flurries of his own but rarely had the final say in any exchanges.

Some may be critical of Marku for not grinding out a stoppage against an opponent at the level of Luisetto, especially for a man who often talks about sharing a ring with the likes of Conor Benn and David Avanesyan. Marku now only has two stoppages in his last seven outings and so bigger statements may need to be made if there is to be any clamour for those fights to be made.

Nonetheless, Marku will always be a popular figure among promoters due to the large number of tickets he is able to sell, with a large portion of the crowd at Wembley Arena made up of his supports. The bout also provided a fun and entertaining ending to a solid card put on by Benjamin Shalom’s BOXXER and Sky Sports, providing another piece to a promising Sky Sports schedule to conclude the year which will be followed up by Top Rank’s Terence Crawford v Shawn Porter in the early hours of Sunday morning. Credit should be afforded to Sky, and fingers-crossed rumours suggesting the upcoming bout between Chris Eubank Jr and Liam Williams is off are not true as we look to a busy ending of a tough year for the sport.