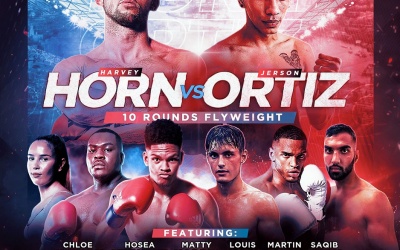 Wasserman take over York Hall this Thursday night for an exciting night of prospects and the first of their “Development Series”. Harvey Horn headlines but there will be plenty of interest in addition with debuts for a host of the promoter’s stars.

Horn (9-0-0) takes on the Tanzanian Fahili Majiha (27-14-4) in an good step up in class. Horn comes off the back of a comfortable win over Adam Yahaya in October and will hope to prove himself against an opponent who has faced some handy opponents.

Majiha comes off the back of three wins, all in Tanzania and has fought several times in already in the UK. In 2019, he lost to Andrew Selby on points in Newcastle and Paul Butler in Liverpool.

The previous year he fought Neslan Machado-Sotolongo (18-0-0) for the WBA International super-bantamweight title at York Hall. He only lost that night on a split decision and will hope to surprise once more in East London.

Ranked 60 by Boxrec, Horn is ranked 104 himself and will head into Thursday eager to prove himself at a higher level.

Ryan Martin (13-2-1) makes his return to the ring after almost two years out and will take on Angel Emilov (10-35-0). Super-welter Martin knows only a win will do as he prepares a step un in class in 2022. Martin’s only two defeats come to Craig Morris and Michael McKinson, both in 2017.

This is Foru’s third visit to York Hall and the Dutch-born prospect will hope to make it a second stoppage at the venue.

Matty Harris will make his debut and has been sparring in good company. The heavyweight has been training with Frazer Clarke and is highly touted by Kalle Sauerland.

Another debutant is Chloe Louise Watson, the flyweight who won gold in the 2017 Youth Commonwealth Games. The GB boxer, originally from Birkenhead, heads into the pro ranks with high expectations. Watson will take on Judit Hachbold (5-12-0) from Hungary who lost on her only previous appearance in the UK.

Big-punching Hosea Stewart makes his professional debut. The heavyweight sparred with Anthony Joshua in his build up to Kubrat Pulev, with Joshua himself encouraging him to make his move to the professional game.

Louis Horn, younger brother of Harvey, makes his debut. A Limehouse ABC boxer, he will be on home turf and will be hoping to make a big impression of his own. Horn is a Haringey Box Cup winner and will no doubt be a fan favourite just yards from his home.

The final debutant is Saqib Khan at welterweight. All of the debutants opponents have not yet been revealed.