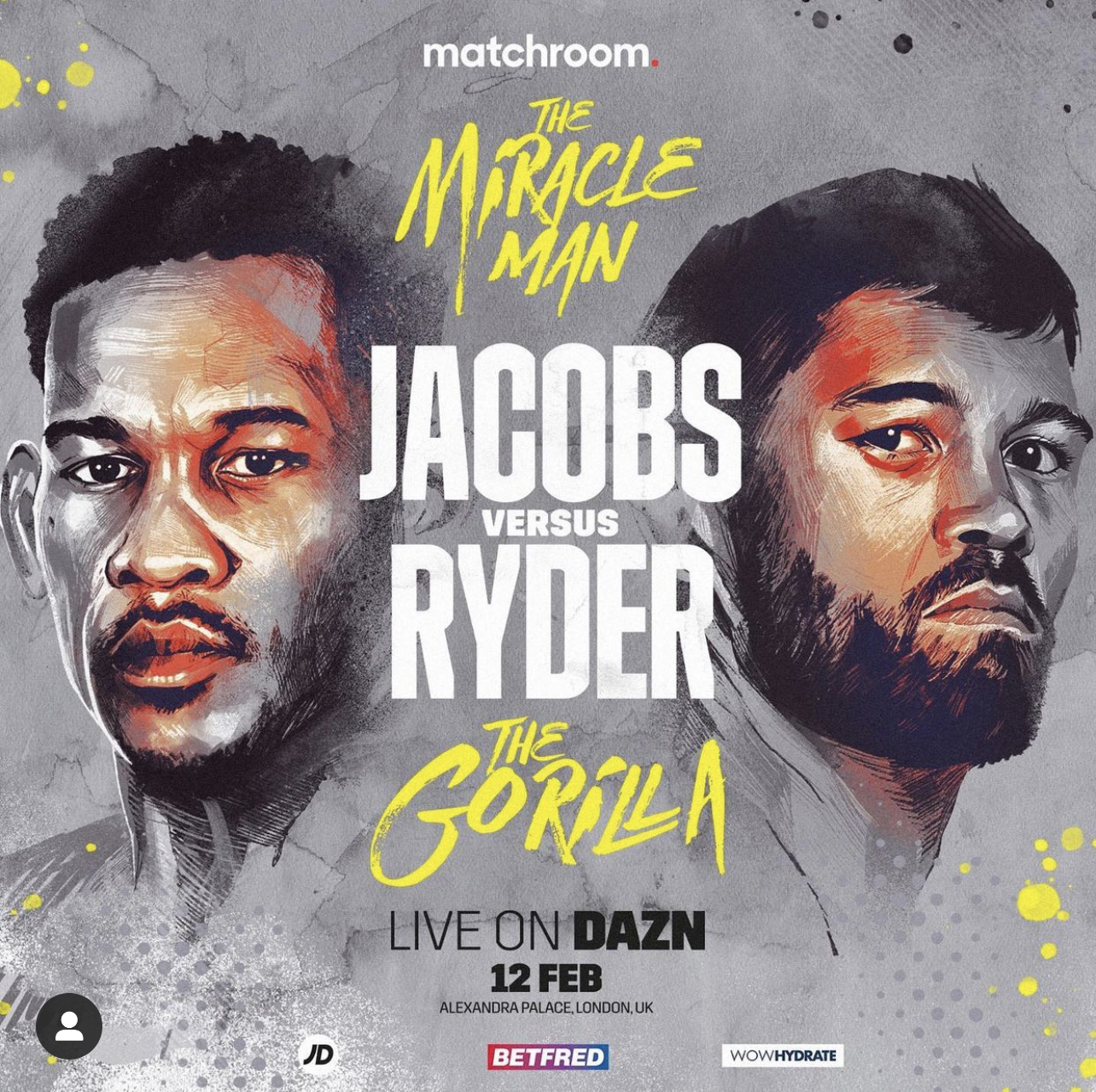 Eddie Hearn’s Matchroom Boxing returns to London’s Alexandra Palace this Saturday for the first time in ten years with a huge crossroads fight in the super-middleweight division, live on DAZN. America’s former Middleweight champion Daniel Jacobs crosses the Atlantic to take on London’s John Ryder, a loss for either man surely slamming a nail into the coffin for future world title aspirations. The undercard is loaded with prospects from the Matchroom-DAZN stable, including highly rated super-bantamweights Ellie Scotney and Hopey Price, big ticket-seller Johnny Fisher and middleweight Felix Cash.

First on the card is London-born welterweight Shiloh Defreitas (2-0) against Russia’s Alexey Tukhtarov (4-23-6). Defreitas won both of his two bouts so far by stoppage and will be hoping to continue this theme on Saturday night. Sticking with the 147lb division, Cyrus Pattinson (2-0) also runs out for the third time as a professional against Evgenii Vazem (9-21) as he seeks to stay busy and get plenty of action under his belt in his first full year in the pro ranks.

After a somewhat troubling 2021, American middleweight Austin ‘Ammo’ Williams (9-0) will look to continue to put the difficulties he has experienced in his personal life over the last twelve months behind him as he seeks to regain momentum at 160lbs. Williams ran out last in December, going the distance for the second time as a pro, and will look to move past the tough but limited Javier Francisco Maciel (33-15) before looking towards bigger fights later in the year. Williams has engaged in several back-and-forth verbal spars with Anthony Fowler in the past and now that the Liverpudlian has moved up to middleweight himself, a potential clash between the pair could perhaps be on the cards for later in 2022.

Romford’s Heavyweight sensation Johnny Fisher (4-0) also features on Saturday, with promoter Hearn revealing the ‘Romford Bull’ to have sold several thousand tickets on his own. Fisher has become somewhat of a social media sensation over the last twelve months along with his father, and the atmosphere was booming during the O2 Arena in October as Fisher secured his fourth victory inside two rounds. Gabriel Enguema (10-11) stands in the opposing corner on Saturday, and there can be little doubting that the ever-growing Fisher fanbase will be baying for more blood as the Essex man continues to grow in the professional ranks.

One of the hottest British prospects across the entire sport right now also returns to a professional ring this weekend at ‘Ally Pally’ in Catford’s Ellie Scotney (3-0) at super-bantamweight. The former Team GB star has been a revelation since turning over, her three performances so far almost flawless. With a personality to match her in-ring ability, there’s no doubting Scotney will play a major role in developing the female code further which has already taken great strides over the last few years. Jorgelina Guanini (9-3-2) is the opponent as Scotney steps up to fight over ten two-minute rounds for the first time.

Former British and Commonwealth middleweight champion Felix Cash (14-0) fights for the first time since running through domestic rival Denzel Bentley inside three rounds last April, stepping up to fight the undefeated Russian Magomed Madiev (15-0-2) respectively. Cash entered the ring against Bentley a slight favourite, but few picked him to deal with the Battersea man so quickly and in such brutal fashion. Having spent time with Team GB as an amateur, Cash has impressed since turning professional despite not receiving the attention his talent perhaps warrants. The Bentley win was a huge statement however and victory should secure the Brit a slot in the WBC rankings, with one of their perplexing trinkets on the line on Saturday night.

Dave Coldwell’s super-bantamweight prospect Hopey Price (6-0) will be the supporting act for the main event come Saturday in what will be his first runout since last April. The Leeds-born Price has been sharp and stopped Zahid Hussain last time out inside two rounds in a bout which was meant to be a step-up and will hope for a similar performance against Ricardo Roman (14-12-3) on Saturday, who previously shared a ring with WBO featherweight champion Emanuel Navarrete in 2015.

Saturday’s main event sees an eliminator for the WBA strap at 168lbs between the ‘Miracle Man’ Daniel Jacobs (37-3) and home fighter John ‘the Gorilla’ Ryder (30-5) in a fight where Ryder said the ‘loser would be done’ at the press conference on Thursday.

Both men seek to regain momentum in their careers at the top level as they gear towards another shot at a world title. Jacobs last fought for world honours against pound-for-pound star Saul ‘Canelo’ Alvarez down at middleweight in May 2019 in a very close fight, while Ryder lost for the WBA belt in this division which was then held by fellow Brit Callum Smith in Liverpool. ‘The Gorilla’ was left feeling hard done by on the night, with many ringside and at home feeling he did enough to edge a close decision on the cards. Nonetheless, Smith was declared victor and went on to fight Alvarez himself at the back end of 2020, losing comfortably in the eyes of the judges ringside. The winner of this fight will be in prime position for a shot at the WBA strap currently held by Alvarez, and while Jacobs enters the ring a slight favourite, Ryder lives less than two miles from Alexandra Palace, and will no doubt be fired up by the seven or so thousand fans packed into the iconic venue on Saturday night.

It’s fair to say that both fighters are at a crossroads in their respective careers and that the loser will face a long road back if they are to taste success at the highest level again.