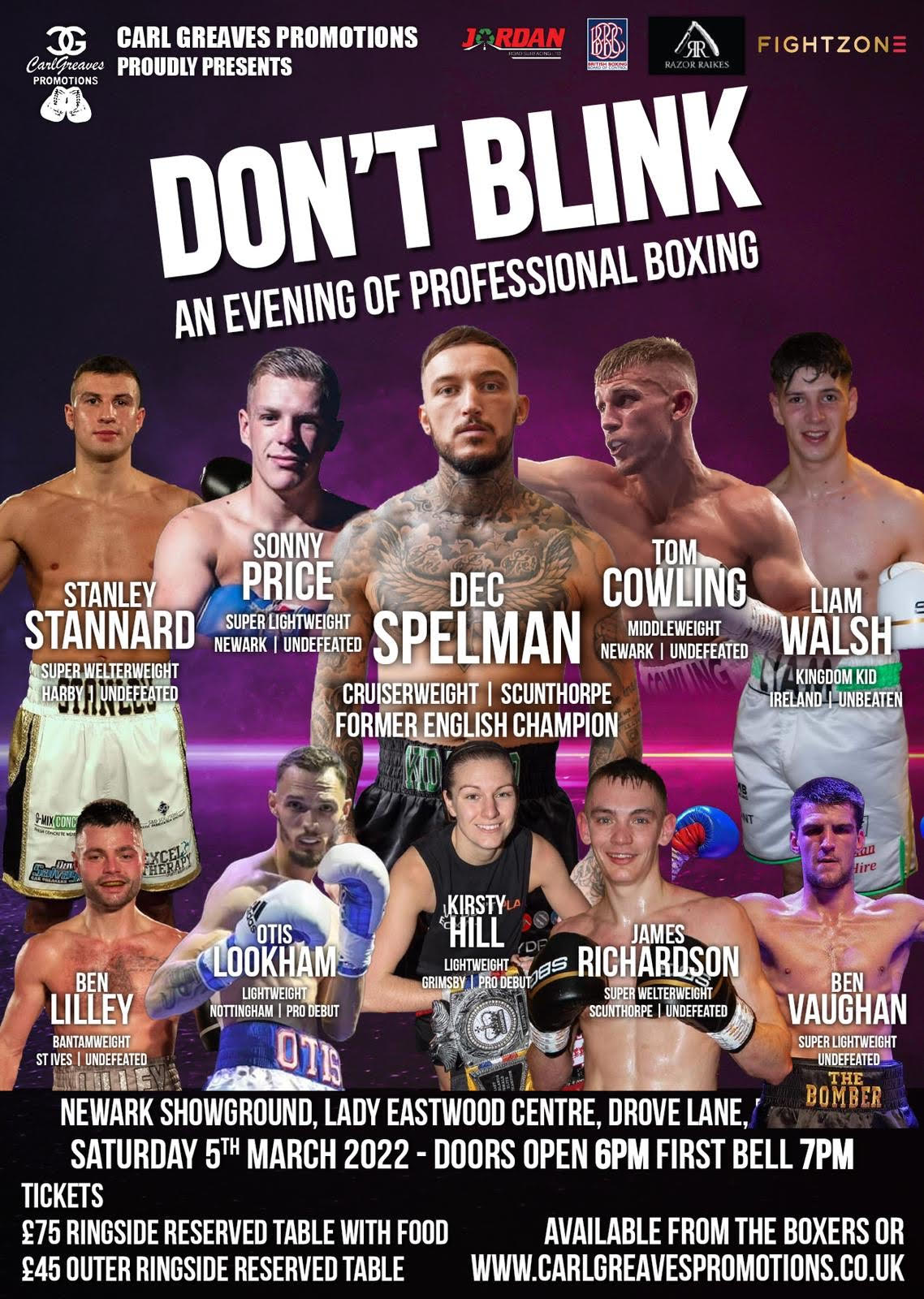 Dec Spelman is back with Fightzone after a layoff. Interview about his return.

Dec Spelman gets headline honours onSaturday March 5th at the Lady Eastwood Arena at Newark’s Showground, on the first Carl Greaves Promotions show of 2022 entitled #DontBlink – and we are delighted that the Fightzone cameras will be there to record all the action.

Scunthorpe’s #KidNytro will be looking to push on for English title honours following a self-imposed 17-month break from the sport, following back-to-back fights with Lyndon Arthur (unanimous pts defeat for the Commonwealth Title) and Anthony Yarde (sixth round stoppage defeat) in 2020.

“It was always the plan to take a break from the sport following such tough fights with Lyndon Arthur and Anthony Yarde. I was struggling with injuries during my preparation for both of those fights but if I’d won those fights it would have been life-changing for me, so I couldn’t say no to either really,” said Spelman.

“I’ve also made the massive decision to change trainers for the next chapter of my career at cruiserweight. Carl [Greaves] will still be my manager, but I will be trained by Al Osta of Osta Boxing moving forward. It was a mutually agreed decision, but I still want him to be part any success I may have. It’s been an emotional journey that we’ve been on, and he’s been a massive influence on my boxing and in life,” he added.

“It has been one hell of a journey which me and Dec have been on. It’s been a massive rollercoaster with lots of highs and lows. The tragic death of Scott Westgarth following their fight at Doncaster’s Dome nearly four years ago and then winning the English light-heavyweight with Scott’s family present at a packed Scunthorpe’s Baths Hall sixteen months later sums it up for me really,” said manager Greaves.

“People have asked me how Dec will cope with fighting naturally bigger opponents who will hit harder than the likes of Lyndon Arthur and Anthony Yarde who are both ‘Elite Level’ fighters. But people forget that Dec can really bang as well and is one of the hardest hitting and toughest fighters currently in British boxing,” he added.

“I turned thirty at the start of February and I want to get moving up the rankings as fast as I can. It’s a big step for me moving up to cruiserweight and I’m taking it one step at a time, but I’m confident that I can build on the success I’ve had at light-heavyweight,” said Spelman.

“With the domestic title holders moving onto bigger and better things, it’s really opened up at cruiserweight. There is nobody that Dec should be worried about fighting in the top 10 when the time is right,” said manager Greaves.

“I for one can’t wait for the second chapter of Dec’s career to start and I will try my best to get him the fights that he wants. I always tell my fighters to have a go, try their best and when their career is over, they can look back with no regrets. As a manager and trainer that’s all you can ask of your fighters and he has always done that ‘to the letter’,” he added.

Speaking about the event itself Greaves said: “This is going to be the biggest night of boxing that Newark has ever seen. The arena is going to be packed to the rafters with 2000 people and it will be rocking on the night. I’ve got possibly my best stable of prospects now and we are all looking forward to starting 2022 with a bang.”