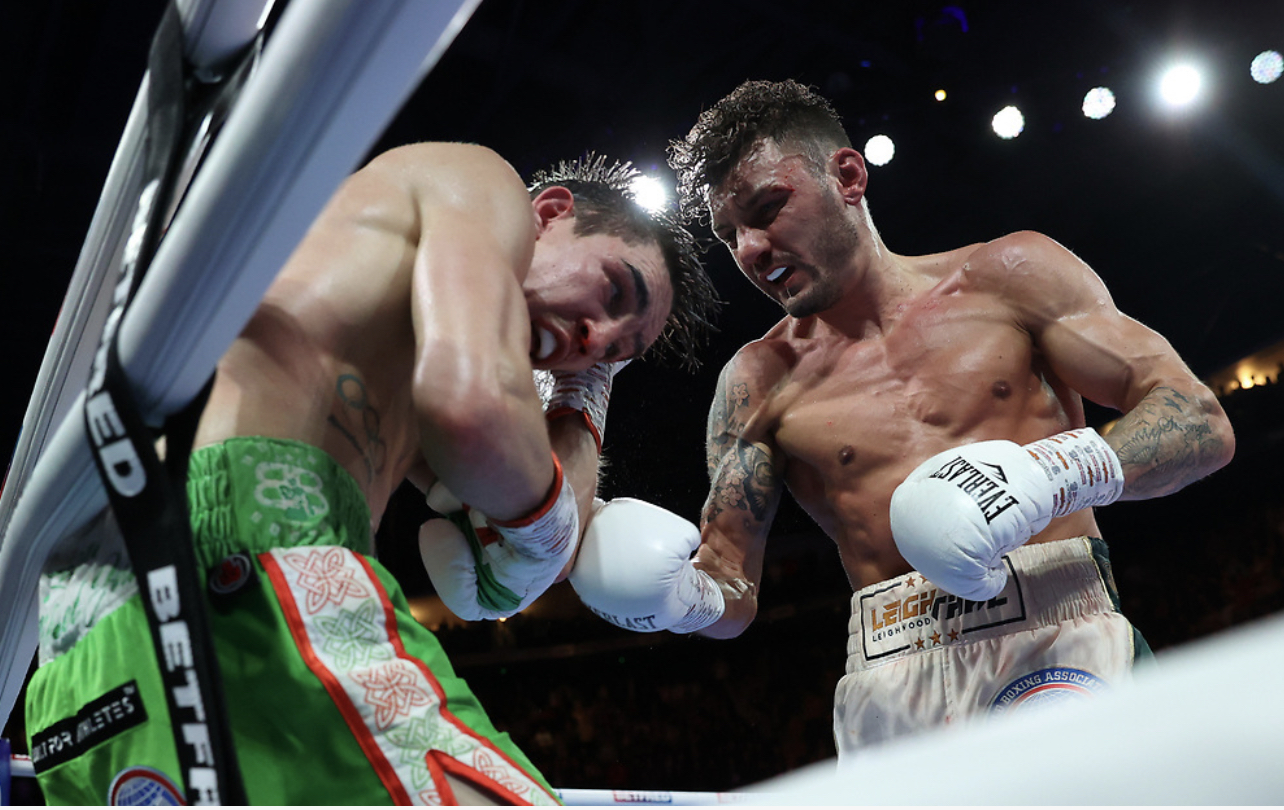 Leigh Wood and Michael Conlan remind us why we love boxing!

The Nottingham Arena saw one of the most astonishing resolutions to a fight in a British ring in years, Leigh Woodturning in an incredible knockout of Michael Conlan in the twelfth and final round after a dominant performance from the Irishman. A sell-out crowd had the arena rocking throughout the main event in what will surely be named the Fight of the Year for 2022 in a featherweight division which is littered by British and Irish talent at world level.

Nottingham’s Wood started the first round well, working the body of Conlan well with numerous right hands until the Belfast man rattled the home man’s chin with an incredible left hand over the top. Conlan had spent much of the round distracting Wood with shots to the body in order to work an opening upstairs and took full advantage when the opportunity presented itself. Wood did well to climb to his feet after a heavy knockdown, and his legs were still unsteady for the second and third rounds where he was again hurt by multiple straight left hands of Conlan, a shot the Irishman could not miss with for much of the fight.

Wood started the fourth a little better, throwing a flurry of shots with Conlan’s back to the ropes but the Irishman displayed superb upper body movement to evade most of what was coming his way. The jab of the Englishman was more prominent though and Wood appeared to finally have his legs back under him, marking his best round of the bout so far. Two more straight lefts appeared to cause Wood trouble in the fifth, Conlan looking by far the more composed and settled of the two with more good work to the body. The sixth again saw more aggression from Wood but much of it was ineffective, landing on the arms and gloves of the Irishman who produced much of the cleaner and tidier work as we entered the halfway stage.

Conlan again looked for the left hand over the top in the seventh, narrowly missing Wood’s chin but enjoyed lots of success with a stiff, robust jab. The pair exchanged shots on the inside towards the end of the round but Conlan appeared to have the final say on most occasions. The eighth was better from Wood, catching the Irishman with left and right hooks but the straight left of Conlan again lands twice and only narrowly missed with the third, sending the Irish fans ringside into raptures. Wood did manage to find a number of hooks of his own with his man backed up to the ropes as they entered the ninth, but proved to be a round which again saw more Conlan success with the left hand over the top as well as more good work with the jab.The same shot brought more success in the tenth for Conlan in what was so far the standout performance of his professional career, his timing and footwork on point throughout. Wood again threw more flurries with Conlan backed up to the ropes but yet again not much landed, most finding the arms and gloves.

The eleventh however saw the entire fight flipped on its head after initial good work from Conlan with hooks before a short left hook on the inside sent the Irishman to the canvas. Adam Booth is furious, claiming his man slipped on water from the corner and Conlan is in agreement, but the Irishman does appear staggered. Wood had not only managed to claw back ground on the cards but now had the momentum as the two entered the final session, the home fans raucous at ringside as the two prepared to leave everything in the ring.

Enter the twelfth and Leigh Wood looks energised with both men throwing every ounce of energy they can summon into each and every shot. Wood looked to back Conlan up behind the jab, Conlan looking weary. Both have shown incredible heart throughout, neither man backing down, their determination to secure victory clear for all to see. Conlanlooked to hold with his back to the ropes before both exchange hooks. Then it happened.

Wood lets another barrage of hooks go before backing Conlanup again with a jab and catches the Irishman clean on the temple with a short right-hand. Conlan’s arms drop to his side, his body slumps motionless as he falls to the canvas and through the ropes, landing on the hard floor outside of the ring. The arena erupts with joy but there’s immediate concern for Conlan who looks to be in trouble. Wood gestures for the Nottingham fans to temper their celebrations as a crowd surrounds the fallen Irishman, showing incredible awareness and class in a moment he could have been forgiven for celebrating like the rest of the home fans in the arena. DAZN commentator Mike Costello describes the post-fight atmosphere as ‘horrible’ as Team Wood again seek to calm the crowd down as paramedics continue to look Conlan over. It was a nervous wait for both those at ringside and for those at home, before to their relief Conlan was declared to be awake and talking backstage before being sent to hospital for scans.

Those watching could finally appreciate what had just transpired in the previous thirty-six minutes that will go down in history as one of the most epic and astonishing fights seen inside a British ring. Just two weeks before his good friend and ex-housemate Jordan Gill produced a stunning comeback in his European title fight against Karim Guerfi with a mighty right hand, Wood had produced a legacy defining moment of his own.

In an era where unnecessary rematches are rife, this occasion is an exception. Not only will you be strapped to find a boxing fan who would not want to see the pair run it back, next time will be capable of selling out a stadium. Both Wood and Conlan have expressed their desire for Nottingham Forest’s City Ground to be the host, with the Irishman telling Boxing Social the day after that he’d gladly accept the lesser purse of the two, showing great class and respect for his opponent after suffering the first defeat of his professional career.

What a fight, what a night, and thankfully both men are in good stead to tell the tale in years to come. After a difficult two weeks, British Boxing needed this.

Saturday’s undercard began with DAZN’s ‘Before the Bell’ broadcast, kicked off by Tony Bellew’s light-heavyweight charge Thomas Whittaker-Hart who sealed his first fight since November 2020 with a superb left hook to the body to the stricken Ben Thomas inside thirty seconds. Thomas failed to make the count and Whittaker-Hart was back up and running after a terrible eighteen months which saw a fight with meningitis and a cancer scare, moving to 6-0 as a professional.

Irish heavyweight Thomas Carty also secured his second stoppage inside three fights after a ringside doctor advised the bout not to continue due to damage to opponent Michal Boloz’s left eye. Carty won every round of the contest and moved to 3-0 as a pro. Nottingham’s Nico Leivars sealed a dominant professional debut over six rounds with a late knockdown of Jose Hernandez in the final round, Leivarstiming his man brilliantly with a left hook. Leivars now stands at 1-0 respectively.

The main broadcast began at 7pm local time and saw the fourth bout of Sandy Ryan’s professional career. Any concerns regarding British judging were not completely quashed with Michael Alexander turning in a bizarre card whereby he found Ryan a 97-93 winner when most of those watching deemed Erica Farias a comfortable victor over ten rounds. The Argentinian was rugged but more than effective, regularly rocking the Derby fighter’s with a punishing left hook. Ryan struggled to let her hands go enough to win rounds on the cards, perhaps eager to impress with another statement stoppage in what was a clear step-up in only her fourth fight against a former world champion. This however should only be encouraged and praised, with there little doubt that the former Team GB fighter learned more on Saturday than she did in her first three fights put together. Ryan will certainly come strong again and remains one of the brightest prospects on these shores, and is eager to secure a rematch against Farias later in the year.

Ireland’s lightweight prospect Gary Cully put on the performance of his career so far against Mexican veteran Miguel Vasquez, securing an emphatic fifth-round stoppage with a heavy straight left after impressing over the previous four rounds, settling into a rhythm quickly and demonstrating an accurate jab throughout. Cully moves to 14-0 as a pro, and hopefully the bout will mark the final fight of Vasquez’s career as the Mexican looked a shadow of the man that most felt was a comfortable winner over Lewis Ritson at the back end of 2020.

Terri Harper put in a superb performance in her first fight at lightweight and since a damaging stoppage at the hands of Alycia Baumgardner in November, surrendering her WBC title at 130lbs in the process. Harper’s opponent YamilaAballaneda was determined but also limited, the Doncaster girl looking sharp throughout the ten rounds, winning all but one in the eyes of all three judges. The Argentine’s head was rocked back regularly by spiteful Harper jabs and one-twos. Harper will now be looking towards those atop of the 135lb division and will surely have eyes on the upcoming clash between Katie Taylor and Amanda Serrano in New York.

Belfast middleweight Caiomhin Agyarko continued his professional development with a commanding ten-round victory against Argentina’s Juan Carlos Rubio over ten rounds. Agyarko was dominant throughout, seamlessly switching from southpaw to orthodox and dominating with the jab. Given that Saturday was only his eleventh pro outing, Agyarko looked very settled and comfortable inside a professional ring, no doubt capable of being moved quickly as he sets his sights on a world title shot at some point down the line.