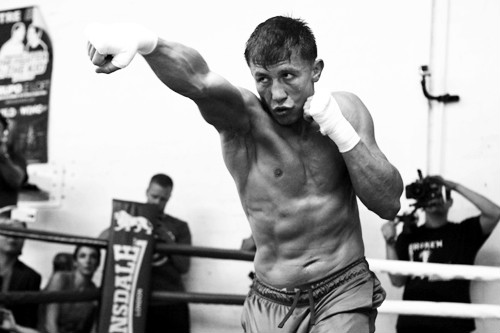 Around the globe: Golovkin takes on Murata in Japan, Ryan Garcia returns on DAZN

Saitama, Japan: The Super Arena in Saitama will play host to a middleweight unification bout on Saturday, with Kazakhstan icon Gennadiy Golovkin (41-1-1) seeking to add the WBA strap, currently held by Japan’s Ryota Murata (16-2-0), to the IBF title he picked up against Sergiy Derevyanchenko in October, 2019. A trilogy fight with pound-for-pound star Canelo ‘Saul’ Alvarez appears to be on the horizon providing the now forty-year-old Golovkin can overcome Murata in the latter’s own backyard, a task which should not be understated with ‘GGG’ seeming to slow in recent fights. The bout was initially scheduled to take place on December 29th before changes to Japanese COVID regulations forced a postponement. Golovkin has not fought since December in 2020, stopping Kamil Szeremeta inside seven, while Murata last fought in 2019, forcing a stoppage of Steven Butler inside five.

On the undercard, WBO flyweight champion Junto Nakatani (22-0-0) seeks the second successful defence of his title since picking it up in November 2020, with Ryota Yamauchi (8-1-0) in the opposing corner. DAZN televise, with the broadcast set to start at 10:10am UK time.

San Antonio, United States of America: Global lightweight star Ryan Garcia (21-0-0) returns to the ring on Saturday for the first time in fifteen months since stopping Britain’s Luke Campbell inside seven with a devastating left hook to the body. Garcia announced shortly after the victory that he would be taking a break from boxing due to a battle with anxiety, but looks refreshed and ready to go again in a mouth-watering 135lb division. Emmanuel Tagoe (32-1-0) of Ghana will be the opponent at the Alamodome on Saturday, an opponent ‘King Ry’ is predicted to have little trouble with as he looks to kickstart his professional career under the tutelage of Joe Goossen after the twenty-three-year-old left Eddie Reynoso earlier this year.

DAZN will broadcast, with coverage of the undercard set to begin at 02:00am UK time.

Las Vegas, Nevada: The 154lb division dominates this Saturday’s Showtime card, with Erickson Lubin (24-1-0) and Sebastian Fundora (18-0-1) coming together in the main event for the WBC’s interim title. The only blemish on the record Lubin comes in the shape of a 2017 first-round knockout defeat to the now unified super-welterweight champion Jermell Charlo, while Fundora has won eighteen of his nineteen bouts so far, only drawing with Jamontay Clark in 2019. The twenty-four-year-old Fundora impressively outpointed former European champion Sergio Garcia last time out in the first major step-up of his career, and he will be hoping for similar success in another tough test this Saturday night against Lubin, who stopped former world champion Jenson Rosario in six last year in his previous outing.

The undercard at the Virgin Hotels sees another intriguing super-welterweight clash between America’s Tony Harrison (28-3-1) and the aforementioned Sergio Garcia (33-1-0) as both men seek to return to winning ways after neither secured victory in their last fights.

Showtime televise in America, with FITE TV the only viable option for UK fight fans at the time of writing for a price of $9.99.

California, United States of America: Unified super-featherweight champion of the world Mikaela Mayer (16-0-0) clashes with Texas’ Jennifer Han (18-4-1) in the early hours of Sunday morning UK time as she edges closer to an all-American unification fight with WBC champion Alycia Baumgardner. The Rio 2016 Olympian must first dispose of Han however who did manage the full ten rounds against pound-for-pound star Katie Taylor last September. Mayer went to war with Maiva Hamadouche in her last outing, running out a deserved winner on points after ten hellacious rounds where she added the IBF strap to the WBO she already held in the process.

The undercard at the Hangar in Costa Mesa also sees the return of Andrew and Jason Moloney of Australia. Super-flyweight Andrew (22-2-0) is scheduled for eight rounds against Gilberto Mendoza (19-11-3) of California, while brother Jason (22-2-0) is set to take on Mexico’s Francisco Pedroza Portillo over ten.

Top Rank promote in California with ESPN broadcasting in the States, while Sky Sports televise in the UK with coverage set to begin at 02:00am GMT.

Nicaragua’s former flyweight world champion Cristofer Rosales (32-5-0) returns this weekend in the away corner, taking on Mexican prospect Angel Ayala Lardizabal (13-0-0) over twelve rounds. Rosales has won three on the bounce since his defeat to Julio Cesar Martinez in 2019 for the WBC flyweight strap, also losing to Britain’s Charlie Edwards a year earlier where he surrendered the same title in London.