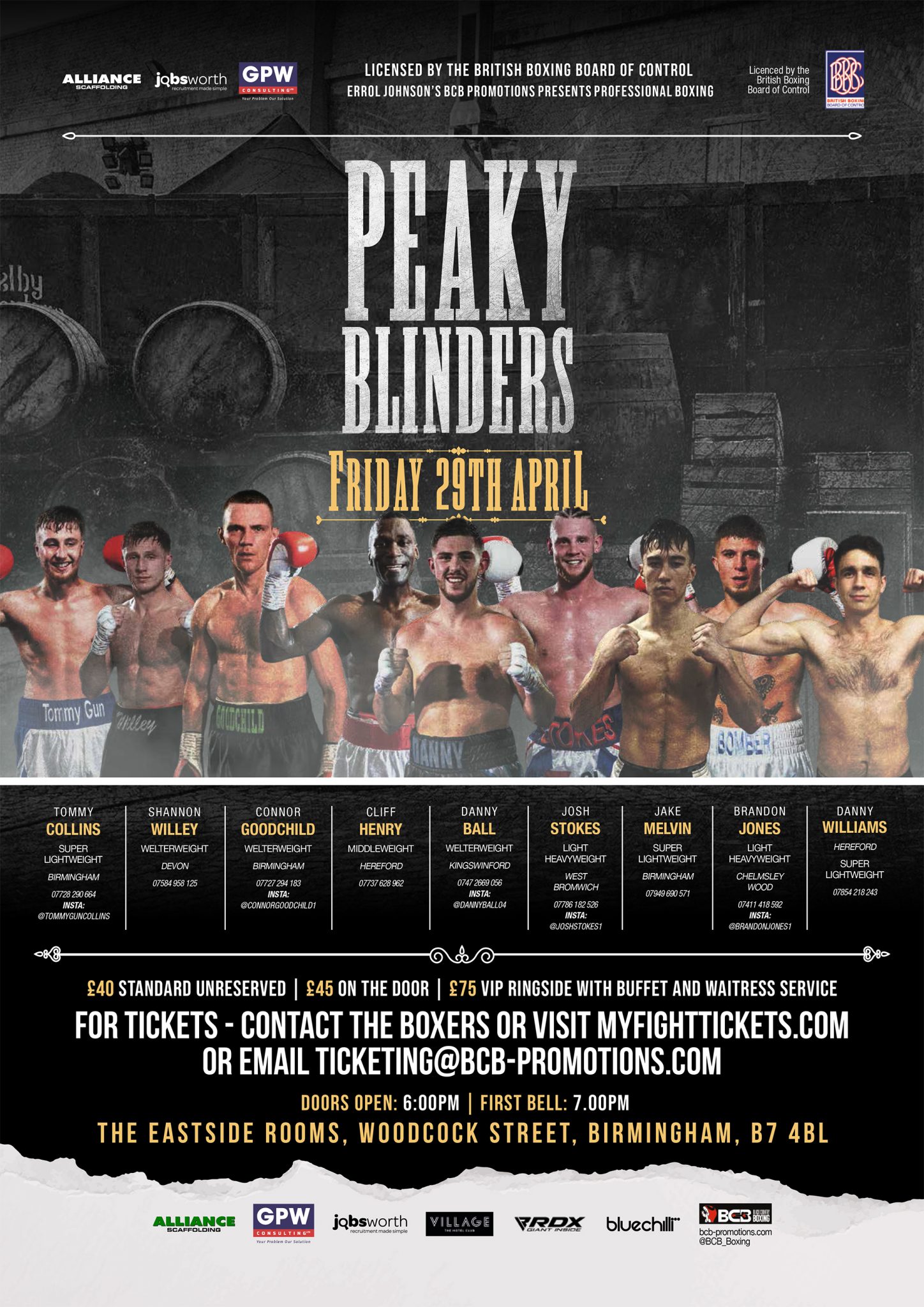 BCB Boxing brings the Peaky Blinders to the second city

Errol Johnson’s BCB Promotions returns with a stellar night of professional boxing on Friday 29th April at the Eastside Rooms on Woodcock Street in Birmingham.

Dudley welterweight Danny Ball (10-1-1) continues his professional journey, having lost last time out to Ekow Essuman for the British and Commonwealth titles at 147lbs with a sixth-round stoppage defeat, the first of his career. Ball has no doubt picked up vital domestic experience in just twelve pro outings so far, taking on the aforementioned Essuman as well as stopping Mason Cartwright back in 2019, who went to the brink with Troy Williamson for the British strap at 154lbs in recent months. The twenty-five-year-old Ball will hope to kickstart another run at domestic titles this Friday in an ever-intriguing domestic welterweight division.

Also featured on the card will be the professional debut of Hereford super-lightweight Danny Williams, who recently took the decision to finally turn over into the pro ranks at the age of thirty-three. Originally taking up the sport in the amateurs over nine years ago, amassing thirteen amateur contests in the process, Williams told BCB ahead of his debut about his desire to eventually land a shot at a Midlands title over the next couple of years, with his professional journey kicking off on Friday over four rounds this bank holiday weekend.

Williams’ stablemate Cliff Henry (1-0-0) also runs out again at 175lbs, looking to build on his professional debut in February when he successfully outpointed Ben Thomas across four rounds, knocking the latter down in the process, at the age of forty. Now forty-one, Henry first laced up a pair of gloves back in 2018 and was forced to turn over due to amateur rules surrounding fighters’ age. Like Williams, Henry harbours ambitions of picking up an area title in the pro ranks, and no doubt possesses a remarkable story to date both inside and outside of the ring.

Also at light-heavyweight, Brandon Jones (3-0-0) continues his professional journey after winning all three of his pro contests to date so far. Welterweight Connor Goodchild (1-0-0) makes his second professional appearance across four rounds following his points victory over Paul Cummings in February. Stourbridge’s Jake Melvin also makes his first appearance as a pro at super-lightweight.

Information surrounding tickets for Friday’s event can be found at https://bcb-promotions.com/2022/03/28/peaky-blinders/.