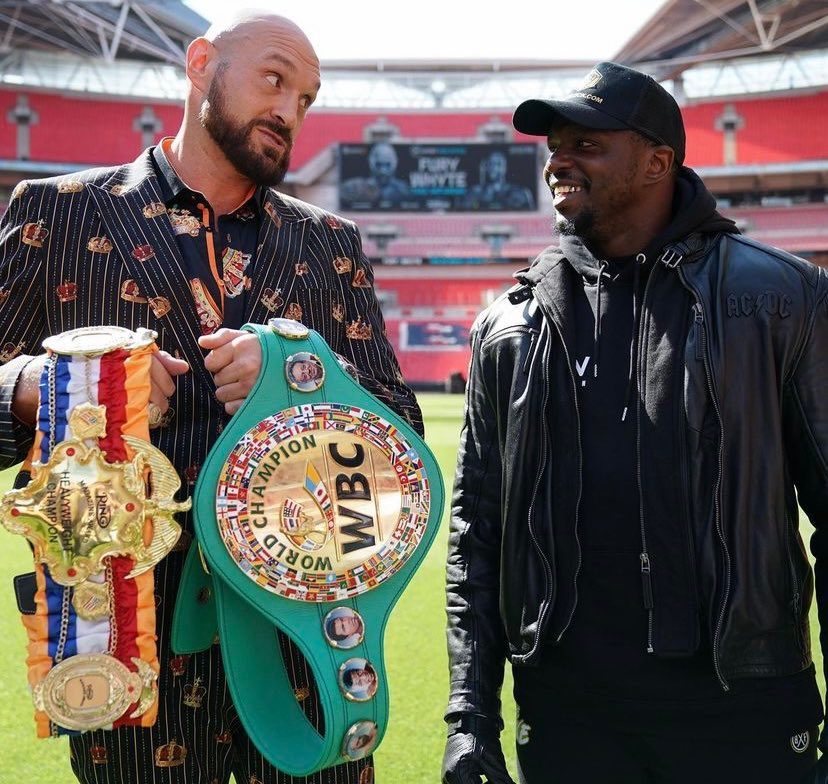 On Saturday night, heavyweights Tyson Fury and Dillian Whyte will clash in front of a record 94,000 fans for the WBC heavyweight crown at Wembley Stadium in a huge all-British affair.

Fury, who enters the ring as champion courtesy of his back-to-back fights with former king Deontay Wilder in America, seeks the second successful defence of his strap since blasting through Wilder in February 2020. The two faced off for a third time in October, fulfilling a trilogy of pulsating heavyweight showdowns, the first of which ended in a draw in 2018. The third saw a phenomenal back-and-forth battle which saw Wilder down in the third before Fury was then on the canvas himself on two occasions in the following round, before the ‘Gypsy King’ eventually broke down the Alabama man, stopping him in the eleventh in what was later dubbed the Ring Magazine Fight of the Year. The three fights with Wilder definitively crowned the thirty-three-year-old Fury as the number one in the division as he picked up the WBC and Ring Magazine belts.

Whyte meanwhile enters the ring on Saturday as the mandatory challenger for the WBC title after an arduous three or four years where he has been seemingly in line to challenge for the belt before circumstances dictated a challenge didn’t come into fruition after all. A highlight-reel knockout defeat to Alexander Povetkin in 2019, where Whyte had the Russian veteran down twice in the fourth before a hellacious Povetkin left uppercut knocked Whyte cold a round later, looked to have potentially denied Whyte a world title shot for good. Thankfully for the Brit, the loss was avenged nearly eight months later in Gibraltar, and ‘The Body Snatcher’ was again in line to challenge for the green and gold belt that was by now held by fellow countryman Fury, for whom he had been sparring partner in years gone by.

It is certainly accurate to suggest that the pair have been on a collision course towards each other for a number of years with various back-and-forth verbal spars in the media fired from both camps along the way, though a tremendous amount of respect from both fighters was certainly present at Wednesday’s press conference. The sit-down culminated in a head-to-head between champion and challenger when members of both camps appeared to engage in heated exchanges when, remarkably, it was the two fighters acting as mediators to stem any chance of a coming together four days out. Friday’s weigh-in saw Fury come in at 264.8lbs compared to Whyte’s 253.25lbs, both men continuing the friendly atmosphere by exchanging caps and embracing just a day before they go head-to-head.

Just how the fight will pan out on Saturday is a point capable of provoking considerable intrigue. Fury, no doubt the more technically astute of the pair, is seemingly capable of it all, whether that he be on the back foot looking to hit and not be hit as seen by his toppling of heavyweight king Wladimir Klitschko in 2015, or by adopting a more destructive, come-forward approach witnessed in the second and third fights with Wilder, both fights ending in compelling fashion. It has been suggested that Whyte merely has a ‘puncher’s chance’ heading into the showdown and while upon first reflection this may sound disrespectful to the Brixton man, it’s most probably accurate. While Whyte is no doubt far more capable in a boxing sense than Wilder, the gap between himself and the man who he will meet at Wembley this weekend is still a sizeable one. One thing that cannot be doubted however is the power that the challenger possesses in both hands, no shot more typifying of this than his left-hook which has rendered many opponents unconscious in spectacular fashion, and if the shot is to land clean against Fury then the upset will surely be on the cards. Whyte will also not be bullied up close on the inside in the same fashion as what Fury did to Wilder in their second and third fights. Wilder, despite his height, fell victim to the superior physicality of the Englishman courtesy of the American’s slender legs and build, a factor which no doubt played a key part in how those fights transpired. Whyte possesses a much bulkier frame and is as strong as a bull, presenting a different puzzle to the WBC champion. Fury will understandably enter the ring a strong favourite, but stranger things have happened in boxing than the belts changing hands again this weekend, especially in the heavyweight division.

A late addition was made to the undercard in recent days following the loss of Anthony Cacace versus Jonathan Romero due to the latter’s failure to attain a visa in time. Ekow Essuman (16-0-0) is now set to defend his British and Commonwealth welterweight titles a week earlier than initially scheduled against Darren Tetley (21-2-0) in the chief support of the evening. Essuman will be hoping to succeed with his second successful defence on Saturday night before looking to step-up towards European level at 147lbs.

An intriguing featherweight clash between Fury’s training partner Isaac Lowe (21-1-3) and the undefeated Nick Ball (14-0-0) is also slated to take place further down the card. Lowe suffered the first professional defeat of his career last time out when he was stopped inside seven at York Hall in a superb fight versus Mexico’s Luis Alberto Lopez and should be credited for stepping straight back in against Ball in a fight that is no doubt going under the radar in the eyes of the wider public. Ball has predominantly fought on the small hall scene but has already won half of his professional outings via stoppage and will be looking to make a big statement on the biggest of stages this weekend in what could prove a breakout fight for the Liverpool man.

Further down the card, heavyweight prospect David Adeleye (8-0-0) runs out again, this time facing off against Chris Healey (9-8-0) over eight rounds as he continues his development as a professional. A younger brother of Tyson also returns, with light-heavyweight Tommy Fury (7-0-0) fighting for the eighth time as a pro against Daniel Bocianksi (10-1-0) in what many are calling a step-up for the twenty-two-year-old. Super-featherweight Kurt Walker (1-0-0) also makes his second professional appearance versus Stefan Nicolae (3-31-2) over four rounds, while another 175lb contest is scheduled between Karol Itauma (6-0-0) and Michal Ciach (2-11-0). Royston Barney-Smith (1-0-0) also walks for the second time as a professional at super-featherweight over four rounds against Constantin Radoi (0-10-0).