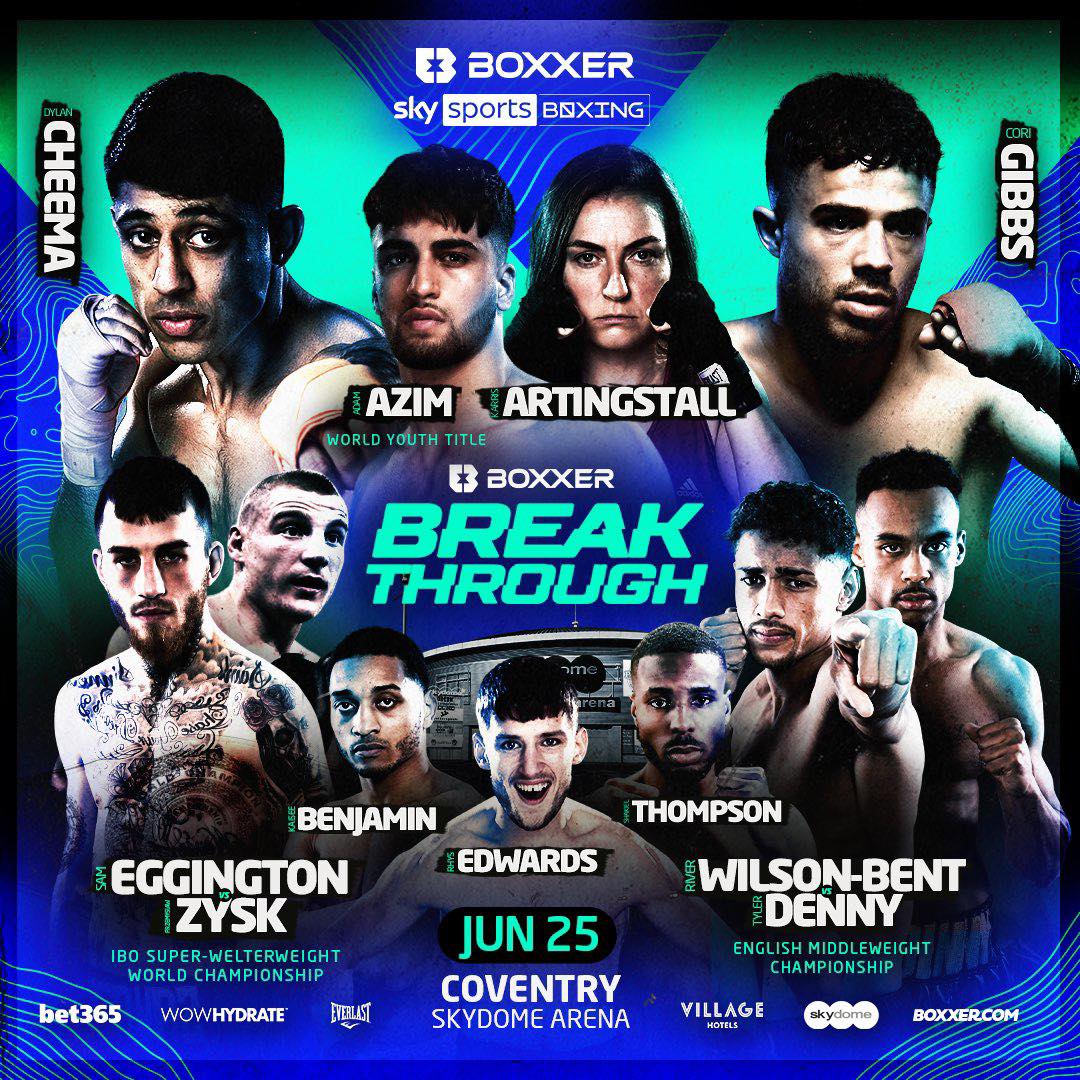 BOXXER and Sky Sports have today announced a June 25 show at the Coventry Skydome. The card features Birmingham’s Sam Eggington (31-7-0) in a twelve-round contest for the vacant IBO title at 154lbs versus Przemyslaw Zysk (18-0-0), with the former’s previous two fights taking place at the same venue as his career gathers momentum again. The Skydome Arena will also witness the rematch between River Wilson-Bent (12-0-1) and Tyler Denny (13-2-3) for the vacant English title at middleweight after the first bout ended prematurely due to a cut over Wilson-Bent’s eye due to an accidental clash of heads, resulting in the fight being called a technical draw. All eyes will be on the pair as they run it back for the chance to be crowned the number one in England at 160lbs.

Tokyo 2020 Olympian and silver medalist in the featherweight division Karriss Artingstall will make her highly-anticipated pro debut on June 25th following a highly successful career in the amateur code. Artingstall put pen to paper with BOXXER and Sky alongside her other Olympic teammates Lauren Price, Frazer Clarke, Caroline Dubois and Ben Whittaker, and will no doubt hope to play a big role in the continuing development of female boxing moving forward. Hot lightweight prospect Adam Azim (4-0-0) is also set to return for the fifth time as a professional after a mightily impressive start to his career where he has already blasted out three of his four opponents. The opponent for Azim is yet to be confirmed although the duration of the bout is slated for eight rounds respectively.

Victor of BOXXER’s super-lightweight tournament in Liverpool back in November Cori Gibbs (16-0-0) also features with the twenty-eight-year-old set to face-off against unknown quantity Carlos Perez (17-6-2) of Spain, while another BOXXER Series winner in Dylan Cheema (5-0-0) also marks his return in his home city following his victory in the lightweight tournament last month. Cheema’s opponent is yet to be confirmed at the time of writing.

Also set to feature in Coventry in June are super-bantamweight Rhys Edwards (12-0-0) as he continues his professional development, as well as super-lightweight Kaisee Benjamin (15-1-1), middleweight Shakiel Thompson (7-0-0) and cruiserweight Scott Forrest (1-0-0) respectively.