Macklin "I Will knock Darren Barker out" 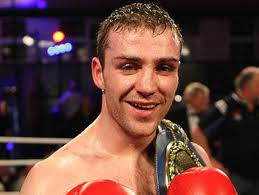 “Mack the Knife” promises home fans fireworks
Former Brtitsh and European Middleweight Champion Matthew Macklin has vowed to put challenger Darren Barker on the canvas in their meeting at Brimingham’s LG Arena on September 18th.
Macklin was forced to give up his titles because of injury last year and Barker stepped in to win the vacant belts from Danny Butler and Affif Belghecham respectively.
Matthew is convinced that Barker is just keeping the belt’s warm for him and bids to take them away from Barker on the much anticipated “Magnificent Seven” card which Frank Warren has organised for September.

“We’ve got the British and European titles on the line and Darren’s enhanced his reputation by winning the titles, I enhanced mine by winning the European title and with a points win over Rafael Sosa Pintos in Ireland last December.”
“So people have a better perception of where we are both at now, he’s considered a fringe top ten fighter and I’m in The Ring top five,” declared the 28-year-old.
Macklin has argued that both fighter’s European Title victory’s are worlds’ apart in terms of performance and opponent and see’s Barker more as a British level fighter and himself more as a world operator.
It promises to be one of the fights of the night on the Birmingham card, here is the rest of the card as it stands:
Darren Barker v Matthew Macklin
(European and British Middleweight Titles)
Nathtan Cleverley v Karo Murat
(WBO Light-Heavyweight Title Eliminator)
Enzo Maccarinelli v Alexander Frenkel
(European Cruiserweight Title)
Ryan Rhodes v Lukas Konecny
(European Light-Middleweight Title)
Kell Brooks v Michael Jennings
(British Welterweight Title, WBO Title Eliminator)
Derek Chisora v Sam Sexton
(British and Commonwealth Heavyweight Titles)
James DeGale v Carl Dilks
(British Super-Middleweight Title Eliminator)
Frankie Gavin v Michael Kelly
(vacant Irish light-welterweight title)
“The Magnificent Seven” is live on Sky Box Office on Saturday 18th Sepetember.
By Phil D Jay