David Haye vs Wladimir Klitschko is ON! for this summer 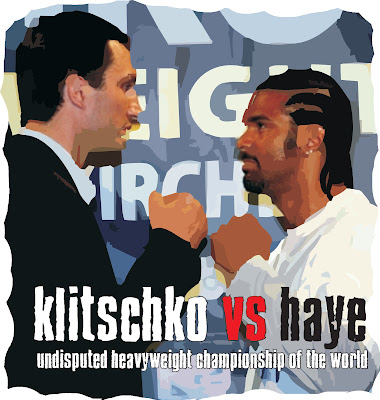 Britain’s WBA heavyweight champion David Haye will finally meet IBF and WBO heavyweight belt holder Wladimir Klitschko in a unification showdown this summer.
Klitschko pulled out of his fight with Dereck Chisora this week due to an injury, but rumours are rife that the real reason is that if he did go through with the ‘Del Boy fight, he would have been gambling against the British champion, when the Haye fight was there on the table to be made and is a fight that is expected to break all records, giving both boxers there biggest ever pay day.

It is very disapointing for Chisora, who was ready to take his best shot against Klitschko and was very confident of causing an upset. But his loss is now boxing’s gain and after all the on off shenanighans that we have had to bear with over the last couple of years from both the heavyweight rivals, it looks like the match-up boxing needs and the fans want will finally go ahead.
Now, following over a year of failed negotiations, Klitschko’s management have finally come to an agreement with Haye’s camp for a monumental heavyweight match-up.
“It’s signed, a fight will either take place on June 25 or July 2,” Booth told Sky Sports. “This time around, it went very quickly and it sounds like Wladimir actually wanted it. So I’m ecstatic.
“We’re talking about the fight taking place in Germany. We were always confident that we could make this fight happen because it’s the biggest heavyweight fight in a decade. David will fight Wladimir anywhere, and now we’re about to have a celebratory scrambled eggs on toast.
“I may now have to hold David back a bit, make sure he doesn’t come off the leash too soon. We believe we’ll get it right and come the morning after the fight he’ll have a lot more belts around his waist, I cannot wait for the fight to happen.” added Booth.
Klitschko has also confirmed the clash will happen, speaking to the German Sonntag newspaper he said: “I am really pleased that we have closed a deal on this fight.”
Bernd Boente, Klitschko’s manager, revealed the football stadiums of Borussia Dortmund, Schalke (in Gelsenkirchen) and Kaiserslautern have been targeted for the venue, with July 2 the prefered and more likely date although June is still a possibilty.
Haye has previously stated that he will retire by the age of 31 but, asked if the collision with Wladimir will be his last, Booth responded: “The fight after, against Vitali, will be David’s last fight, because after he’s beaten the brothers, there’s nothing left for him to do. If David knocks out the younger brother, what’s the older one going to do?”
Lets hope there are no injuries, no more contract disputes and David Haye vs Wladimir Klitschko happens! Boxing needs this fight, but until they are stood opposite each other in that ring come the warm weather! I wont hold my breath!
By Chris Maylett