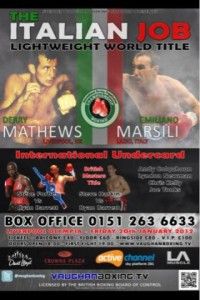 Derry Mathews takes on Emiliano Marsili tonight at the Olympia in Liverpool for the vacant IBO lightweight title and another massive step on the comeback road, after retiring from the ring in 2009.
The second coming of ‘Dirty Derry’ has been one to match his previous successes and now after turning his back on boxing, stands within distance of laying his hands on a title belt and clarifying his decision to continue in the fight game.
Derry (29-5) came back to boxing with a new found desire, he moved his camp from his home of Liverpool, to Manchester, and began training under Oliver Harrison at his Salford gym. Harrison a well respected student and coach, had previously worked with Amir Khan, he took Jamie Mooore to British, European and Commonwealth belts, and currently trains world title challenger Martin Murray, as well as a crop of up and coming professionals. Derry clicked with Oliver and the two haven’t looked back since.
Mathews, at 28, looks a different fighter than the old version, and under Oliver, seems to be enjoying his work. He looks happier, healthier and determined to give his all to boxing, before he decides to retire a second time. Derry missed boxing after he retired, it was what he knew best and what he loved, and boxing would have missed him! But tonight in his home town, before his devoted fans, he has the chance to prove he was right, to return and cap a memorable journey.
A win for Mathews and there has been talk of a fight with interim world champion Ricky Burns in a unification match up later this year. And if Derry can pull off his ‘Italian Job’ and his Scottish counterpart successfully defends his WBO crown against the dangerous Paulus Moses in March. Then the contest could become a reality for late spring or early summer.
His unbeaten Italian opponent Marsili (23-0-1) though has big plans in boxing himself and with 60+ fans travelling with him from their home city of Lazio, the Italian champion will not want to let them down, and will be coming to Liverpool, fully expecting to leave with the belt and his impressive record intact.
“He’s had eight weeks to train and is coming to win. He’s bringing supporters over with him and must be confident.” said Mathews about his opponent.
“He’s never tasted defeat but I will knock that confidence out of him. He’s feeling so confident right now and I know what it’s like.
“You think you can walk through everybody. That’s the way I felt but on Friday he will be in for a shock.
“It is up to me to bully him, find the centre of the ring and knock the confidence out of him.”
“I think Marsili comes to fight as well as being a good counter puncher. He’s old at 35 but he looks as though he has fast hands and has not had many hard fights, which obviously favours him.
“But he has got to come to the Olympia and when I come out to my own song on Friday night, he’ll know it’s going to be difficult.
“He will want me to come at him and then pick me off. He seems like he may run away and stay on the back foot but if he comes forward then I will hit him all night.
“I don’t think he has been in with anyone of my ability.” added Mathews.
The undercard for Derry Mathews’ world lightweight title fight.
Boxing commences at 6.30pm on Friday, January 20 at the Olympia, Liverpool.
For Tickets visit  www.vaughanboxing.tv/blog/?page_id=39  or call 0151 262 6633
The fight will be shown Live on BoxNation (Sky Channel 436 and Virgin 546) from 6pm
Derry Mathews v Emiliano Marsili
Ste Harkin v Jason Ball
Joe Selkirk v Ryan Toms
Paul Butler v s/o
Wayne Adeniyi v Jody Meikle
Matty Clarkson v Simeon Cover
Chris Kelly v Liam Griffiths
Lyndon Newman v Steve Spence
Joe Tonks v Kristian Laight
Tom Carus v Robin Deakin
Mick Phillips v s/o
Andy Colquhoun v Dan Carr.