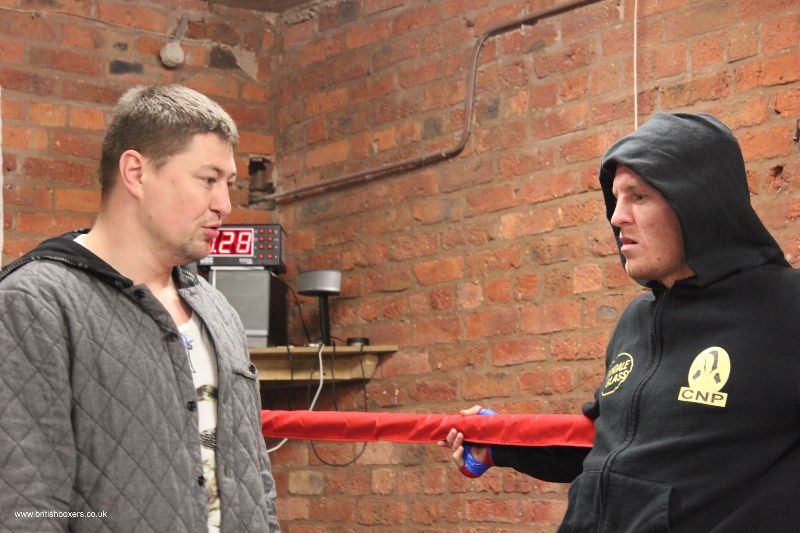 Inside Boxing Interview with Terry Flanagan and Steve Maylett

Unbeaten Featherweight boxer Terry Flanagan 13-0 together in the ring with coach Steve Maylett talk to Terence Dooley for BritishBoxers.co.uk about his last fight and hopes for a domestic title shot in the near future.

Flanagan and life long friend Maylett have trained and worked together from the amateur days, Maylett himself being an accomplished fighter in his own right. Both from Ancoats in Manchester they together with light-welterweight Karl Place are on a mission to win titles and fulfil the challenge that they set themselves years ago, to get to the top of the boxing ladder together.

Southpaw Flanagan, 22,  turned professional in 2009 and has been developing into a fighter of promise, so much so he has a self proclaimed fan in former British and European light-middleweight champion and SkySports Boxing pundit Jamie Moore, who says ‘he is his number one fan’ and even calls him ‘Pacquiao’ after ‘Manny PacMan himself, see Jamie on the video in the dressing room with Flanagan before his last fight against Kristian Laight last month in Blackpool on the undercard of Brian Rose’s British title defence against Max Maxwell.  Maylett was also in the corner of Rose that night as chief second to Bobby Rimmer, someone he has known all his life and someone he has worked with and learnd from since he came into boxing.

Place, 23, lost his unbeaten record in December last year against Stevey Williams when he was sensationally stopped inside two rounds by the ultra fit and strong Liverpudlian. Place is now on a rebuilding mission and Maylett speaks to us about the loss to Williams and Place’s plans for the future.

Maylett who by day is a youth worker in the tough North Manchester district of Moston, rehabilitates, disciplines and guides young people by day and is just as dedicated to his night shift of a ‘Prizefighter trainer’  Still only 27 himself Maylett is mature and ahead of his years, he is a boxing annalist and will watch hours of tape of his boxers upcoming opponents to gain an edge going into the fight.

At the time of the interview Karl wasn’t in the gym, he still works full time has a bricklayer and was working out of town, so it was for Flanagan and Maylett to step in the ring with BritishBoxers.co.uk team as we go Inside Boxing and camp ‘Finest’