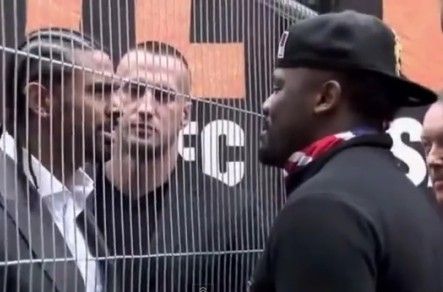 It was confirmed today that David Haye and Dereck Chisora’s heavyweight showdown on Saturday 14th July will be for the WBO International and WBA Intercontinental titles.
The British Boxing Board of Control are both affiliated with WBO and WBA organisations.
Paco Valcarcel, president of the WBO, said, “We have to go ahead and approve the fight.  The Luxembourg Boxing Federation is a member of the WBO and the problem is between the LBF and the British Boxing Board of Control, not the LBF and the WBO.”

Also confirmed for the “Licensed To Thrill” card, being staged by BoxNation in association with Team Sauerland and Hayemaker Boxing Ltd, is Alexander Povetkin’s WBA World Heavyweight title defence against former WBC/IBF Champion Hasim Rahman on the show which will be sanctioned by the Luxembourg Boxing Federation.

An Open Letter from the Federation Luxembourgeoise de Boxe. in reply to the BBBofC’s Press statement regarding the Haye v Chisora fight going ahead under there sanctions.
I was surprised to say the least at the Board’s press statement dated 9th May 2012 in relation to the Haye v Chisora fight at West Ham and particularly the references to the Federation Luxembourgeoise de Boxe.

I am also concerned at the threats made to our members and other licence holders of the Board of Control to withdraw their licences if they participate in the show.

Our Association has worked alongside the BBB of C for 13 years. Generally speaking this has been a good working relationship and we see no reason for this to change if we all genuinely share a passion for the betterment of British Boxing. However, over the last few years certain actions taken by the Board have alienated license holders and we have no effective vote on these decisions. The only people who can vote andhave a say in how the Board is run are the Area Council Officers. However, these Officers are not voted in by the licence holders but are appointed by the Board and the Board itself appoints its own directors. Therefore, there is no-one who can vote on any issues at all who has any duty to represent the licence holders and we feel we have no voice.
Whilst we raised these concerns with you, nothing happened and you refused to even discuss them. This culminated last year with a protest by license holders at the Company’s AGM. As a result of which the AGM was suspended with the Board agreeing to meet with a delegation of license holders to discuss the way forward. The delegation (democratically elected) met with you in Birmingham. We were told that you would listen to what we had to say but would make no changes; there was little point in us meeting.

Since our meeting in Birmingham, there have been further matters which caused us concern. Firstly Jane Couch’s licenses were taken away from her in what seemed to us to be a personal dispute with her and the Chairman rather than a matter which should have concerned the Board. This dispute
exposed worrying concerns about Mr Giles before the Board stepped down having spent time and money fighting the dispute. Secondly, a complaint was made by Mr Frank Warren over the lack of BBB of C support of Dereck Chisora when he fought in Germany.

He alleged that had the Chairman been more pro-active then the issues in Germany (including checking the security arrangements) could have been avoided. I was not present in Germany and so do not know what happened, but whoever was responsible, it does show that the Board and the Chairman have lost the support of various licensees. I speculate, but this could be because the Chairman has other loyalties which could cause licence holders to question his full support. He is the Vice Chairman of the EBU and holds a prominent position with the WBC.

After our meeting in Birmingham, the members of our Association together with other licence holders entered into discussions with the Federation Luxembourgeoise de Boxe. The Federation has been in existence in its present form since inception in 1922. It is affiliated to the EBU, WBA, WBO, IBF and WBC and it therefore is recognised by the BBBofC. Indeed the BBBofC have authorised boxers to fight in tournaments regulated by the Federation on many occasions in the past. It could not do otherwise without being in breach of its own Rules. Less than a month ago the Federation regulated and staged a show in Germany with the full support of the German Federation who permitted its own licence holders to take part.

We were attracted to the Luxembourg Federation because its safety record is second to none and it has personal injury insurance in place and strict procedures for protecting the safety of boxers. However,coupled with that, it is run by its members for its members. Managers, promoters and trainers are allowed to vote at the Company’s AGM and therefore have a real say as to how boxing is run. Whilst the Federation regulates the safety of boxing, it confines this to licensing, ringside supervision and the protection of the boxers in the ring, allowing the members freedom in other areas. Therefore we entered into an agreement so that the Association is now the Federation’s representative in the UK and has been since March 12th 2012. I informed you of this and I informed you of the insurance and safety provisions when we met. This makes press release all the more surprising as I had been completely open with you as to what we were doing, the reasons why and the protection which would be afforded to the boxers under the Federation.

Moving onto the licensing of Haye v Chisora. Neither boxer is on the banned / suspension list. Chisora was sanctioned by your own body and having heard the evidence you decided to withdraw his licence rather than
ban him. It is worth noting that this was under enormous pressure and scrutiny of the press. We are surprised that you question whether these boxers should be licensed as they are both fit and well to fight, neither have a criminal conviction and neither have been banned by yours or any other sanctioning body. This is especially so when there has been not a squeak out of the Board over Mayweather, Tyson, Scott Welch, Danny Williams and currently Scott Dixon to name but a few.

From the perspective of our Association, I am concerned about your attempt to intimidate your own members into not taking part. You do this in two ways. First, you claim that you will de-licence any member who takes part in the fight. This is unlawful and a breach of your own Rules. Secondly you seek to limit the insurance for boxers who are licensed by the BBBofC and would ordinarily have the benefit of insurance even if they fight under a different sanctioning body. This, in particular, is an extraordinary move for the BBBofC to seek to limit its own boxers’ insurance when they have paid license fees and taxes for the benefit of this insurance. I seek from you the confirmation of your insurers of their position – presumably you got this before issuing the press release and so can send it to me by return.

On behalf of our Association and the Federation, we require from you agreement that you will not seek to interfere with the fight and show. If this is not forthcoming by close of business on Friday 18th May 2012 then the following will happen:

1) The membership of the Professional Boxing Promoters Association will move for a vote of no-confidence in the Board; and

2) The Federation of Luxembourg will consult its lawyers to start proceedings for restraint of trade that is if these proceedings have not by then been brought by another individual or company in the meantime.

I look forward to hearing from you and if you wish to meet and discuss matters, do let me know.