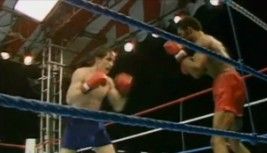 Click the play button above to watch the full fight

It was billed as the biggest fight involving a British fighter since Henry Cooper fought Muhammad Ali, 20 years previous. The atmosphere that night at QPR’s Loftus road football ground was feverish and everybody was watching the ‘Clones Cyclones’ big night and what a night it was.

After the tense crowded ring walks and the national anthems Barry’s father takes the mic to sing the classic song Danny Boy. If by now the hairs are not standing up on the back of your neck, wait until the fight starts, it is a classic and McGuigan is at his very best, he had to be!

If you never got to experience this fight at the time, then sit back for an hour take yourself back in time and enjoy the full broadcast from start to finish including build up of this great sporting night.

Such was Barry McGuigan’s standing and popularity in Ireland, the featherweight’s world title win against the holder Panamanian Eusebio Pedroza was celebrated on both sides of the religious divide and border.
The fight, in front of 25,000 at Queens Park Rangers’ Loftus Road, had been a classic

The first eight rounds had been close then McGuigan staggered the champion in the ninth round and as he increased the barrage Pedroza began to falter.

The 13th round saw the champion’s legs buckle under a series of lefts from McGuigan. Pedroza held on but the judges gave their unanimous verdict to the Irishman.

Here Barry McGuigan and a number of people who remember that great night take a look back at the fight.