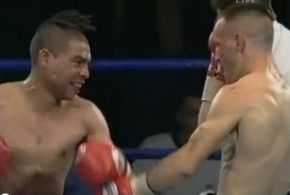 British BoxersJanuary 28, 2001
Classic Fight VideoLATEST BOXING NEWSvideo0 Comments1 min read
A fight here from July 2000 this is surely up there with the best British boxing battles. It turned out to an unlikely classic at the Bowler’s Arena in Manchester where Londoner Michael “Shaka” Ayers took on late-substitute Wayne Rigby for the IBO lightweight title.
Defending champion Ayers, 28-3-1 (25), only discovered who his opponent would be at late notice. The selection of 27-year-old Rigby was understandable as he was a former British champion and based in Manchester.

Ayers, 35-years-old, was coming to the end of a stop start career that saw him reign as British champion after losing an early world title shot to Italian Giovanni Parisi. A domestic champion for over two years, Ayers won a Lonsdale belt outright before taking time out from his career after an excellent stoppage win over the previously unbeaten Colin Dunne. This is part 1. The other parts will appear on the video screen when this finishes.