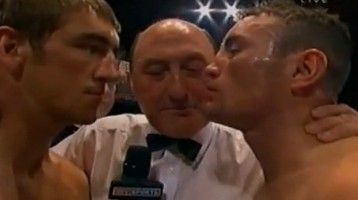 The classic fight for the British Super-featherweight title October 2003.

Alex Arthur v Michael Gomez will always be remembered as one of the best modern day fights to be held in a British ring. Gomez upset the odds and the Edinburgh locals by beating Alex Arthur to take his British super-featherweight crown in October 2003.

Challenger for the title Gomez ‘The Manchester Mexican’ stopped Arthur in the fifth round of a ferocious contest, stunning the Scotish favourite and his passionate hometown fans.

The undefeated Arthur was making the third defence of his Lonsdale belt and was looking to win the belt outright.

For Gomez, 26 at the time, it was a make-or-break fight, the former British champion and WBU title challenger, who Ricky Hatton in his corner that night, had threatened to retire if he failed to win.

If you didn’t see it at the time or haven’t done for a while? Then your in for a treat sit back and enjoy another British boxing classic.