Erick ‘The Eagle’ Ochieng Ready To Soar To New Heights Against Jon Harrison On The 22nd January. 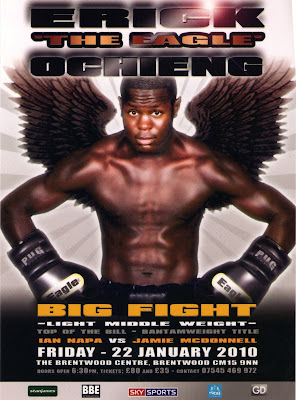 Stoke Newington’s exciting Super Middleweight prospect Erick ‘The Eagle’ Ochieng is back in action on the 22nd January on the undercard of Ian ‘Dappa’ Napa’s British Bantamweight title defense against Jamie McDonnell at the Brentwood Centre, Brentwood Essex. 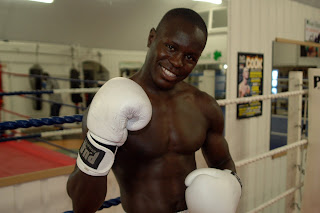 Ochieng, one of promoter Frank Maloney‘s new young rising stars, has started his professional career brightly by winning his first two bouts.  In his debut ‘The Eagle’ dominated the proceedings against vastly experienced veteran Matt Scriven (13-54-0) winning every single round.

His second fight, against Prince David Davis at the Harvey Hadden Leisure Centre in Nottingham, was more of a closer affair. Again Ochieng dominated the fight from start to finish but the game Prince David was determined to impress his local fans.

For his upcoming fight Ochieng will be facing another veteran, Jon Harrison (10-16-1), after his original opponent Gavin Brook withdrew.

Following training, at Rooney’s Boxing Gym in Southwark, South East London, Ochieng took a few moments to talk about his preparations for his showdown with Harrison. “I’ve been in the gym training hard. I’ve been totally focused, putting the hours in. I feel good. Done a lot of sparring. I’ve been sparring Ben Murphy. He’s lighter than me but he’s real strong for his weight. He’s a pressure fighter so I’ve been working my technique and speed, so I’m in great shape.

I was supposed to face Gavin Brook. I don’t really know much about my opponent now as he is a late replacement.

I have been really focused on being prepared for anything. I’m in top condition. I’ve left no stone unturned so it doesn’t matter as I’m going to win.

I think with Brian the sky’s the limit, the future’s bright. He has me ready to fight at all times. My last fight we got the call on Thursday to fight on Friday. Brian asked me if I wanted it and of course I said yes. I knew I was fight ready. I am always in fighting condition. I had done 10 rounds on Tuesday and 8 rounds on Wednesday. I was sharp so when Brian asked if I wanted to take the fight I said yes without missing a beat.

That was a good fight against Prince David (Davis). It was his debut and he’d come there to win. You know what I’m saying, he was really up for it and wanted to impress. He wanted to keep pressuring me. It was a really good show and a good win for me.

Ochieng will not be the the only Rooney’s Boxing Gym based fighter on the card on the 22nd January as the headliner, British Bantamweight Champion, Ian ‘Dappa’ Napa and Ben Murphy, who faces Lee Cook, are both also trained there by Brian Lawrence.

‘The Eagle’ took the opportunity to also speak about his gym mates upcoming fights. “Ian Napa‘s in great shape. He’s fast and tough. He’s just got to stay disciplined and he’ll win the fight.

Ben Murphy’s in great shape too, he’s up against Lee Cook. Ben’s a pressure fighter. He’s so strong for his weight, I know that when he spars me. He’s going to win the fight for sure.”

Eric ‘The Eagle’ Ochieng vs. Jon Harrison is on the undercard of Ian ‘Dappa’ Napa’s British title defense, against Jamie McDonnell at the Brentwood Centre, Brentwood, Essex on Friday the 22nd January 2010.