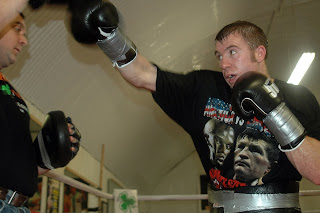 Welterweight Scott ‘The Gent’ Woolford will face his sternest test of his career when he faces former WBF Light Welterweight and British Welterweight Champion Young Mutley at the Harvey Hadden Leisure Centre in Nottingham this coming Friday, the 5th February.
Woolford’s career seemed to go in to free fall following his loss to Ricky Hatton‘s younger brother, Matthew, back in September ’08. Prior to this loss the 26 year old from Ramsgate in Kent had only lost once in nine outings. Further losses followed, firstly against Tom Glover when they fought for the vacant BBBofC Southern Area title in November ‘08 and then in March ’09 when he suffered a disastrous third round stoppage at the hands of Mark Douglas.

The regular top class sparring clearly paid dividends as in his very next fight, in September ’09, he scored a resounding victory, when he stopped William Warburton in the fifth round. This was followed by another stoppage victory, over Scott Hayward, two months later.

Following one of his sparring sessions, at Rooney’s Boxing Gym, Woolford spoke briefly on his preparations for the fight and his esteemed opponent.

It’s a very good fight for me at the moment. Young Mutley’s been about for a long time, has a lot of experience. He’s a very good fighter. Hopefully going to cause a surprise as I am coming in as the underdog. Yeah, I’m really looking forward to it.”