Boxing’s stars in mourning for Ernie 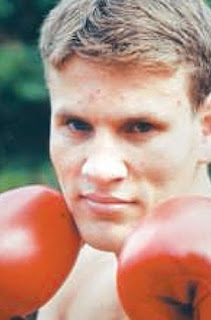 By James Savage. www.worcesternews.co.uk
SOME of the biggest names in British boxing are mourning the death of a Worcestershire fighter who was found dead.
Ernie Smith, of Stourport, fought 161 times and provided many up and coming boxers with a stern test as they worked their way up through the ranks.
The 31-year-old, nicknamed ‘Gypsy Boy’ was found dead at a popular beauty spot in Llanelli, South Wales, on Wednesday, January 27.
Police are investigating the death, believed to be a hanging, but say it is not being treated as suspicious.
Middleweight Smith won just 13 times as a professional and had lost his last 55 bouts – a run stretching back to 2005.
But statistics do not tell the real story of Smith’s contribution to boxing and he will be remembered as a durable trial-horse upon which the latest prospects could test their skills. Current fighter Nathan Cleverly made his debut against him, while Smith also fought the likes of Kell Brook, Darren Barker, Ricky Burns, John Murray, Michael Jennings and Gavin Rees. None of them stopped him.
Top promoter Frank Warren’s veteran whip Ernie Draper was shocked to hear of Smith’’s death. “He was a lovely boy. He didn’t cause any problems for anyone. If he’d been offered a fight on the moon he’d have got there on time,” he said.
Mr Smith was noted for travelling across the country at a moment’s notice to fight for small change.
His long-time trainer Errol Johnson said: “Ernie was a great, lively kid who would do anything for anyone, turn up anywhere at the drop of a hat. He loved boxing. We were very shocked to hear the news.”
Smith talked about opening a gym at the end of his career, but it finished sooner than he would have liked, after failing his annual MRI scan last year and being denied a new licence by the British Boxing Board of Control. Mr Smith’s twin Billy is also a professional fighter.
Mr Smith had recently moved from Stourport to Llanelli to live with his girlfriend.