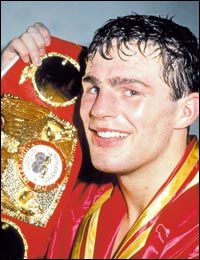 “I sparred 96 rounds with Mike Tyson when he was at his best and even gave him a blackened eye which he still talks about to this day.” – Glenn McCrory
Born in 1964 in Annfield plain, County Durham, former World, British and Commonwealth Cruiserweight Champion Glenn McCrory’s story is one of disappointment, guts and ultimately, glory.
Glenn turned pro as a 18 year old and made his debut at the Marriott Hotel in London’s swanky Mayfair, knocking out Barry Ellis in the first round. After racking up another 12 straight wins all within 15 months, Glenn looked destined to dominate the domestic Cruiserweight division.
In September 1985, Glenn (13-0), faced little known John Westgarth (5-2-2) at Gateshead Lesuire Centre in Newcastle and in a major upset, Glenn was badly knocked out in the fourth round.
It was a massive blow to Glenn’s confidence, after which he went on to lose four out of his next five bouts, the last of which was another devastating knockout against six time defeated, Hughroy Currie. This called in to question whether he was capable of challenging for the games biggest honours or if he would go on to be just another of boxing’s forgotten journeymen.
Glenn wasted no time, dusted himself down and flew to the States contemplate his next move and just six weeks later, ground out a points win over Joe Adams in Kentucky, which he then followed up with an impressive first round KO against Calvin Sherman.
Glenn returned to the UK refreshed and hungry, he overcame his next two opponents on points to earn himself an eliminator for the British Cruiserweight Title against Andy Straughn.
In a tough ten rounder, Glenn earned a TKO in the tenth, to make himself the number one contender.
With the British Title in his sights, Glenn was offered the opportunity to fight for the Commonwealth Title in a match up with Chisanda Mutti, It was too good to turn down and a well earned points win followed for his first major Title.
Still yearning for the British belt, He put his own Title on the line in domestic battle vs Tee Jay, Glenn again won on points and within 15 months, had gone from the depths of despair to British and Commonwealth Cruiserweight glory.
After three more knockout wins (two more in the USA), and a points win over American Steve Mormino, Glenn hoped for a shot at Undisputed World Cruiserweight Champion Evander Holyfield.
In Late 1988, Holyfield vacated all his titles to move up to Heavyweight, which meant Glenn was thrown in with the tricky though inexperienced Patrick Lumumba for the vacant IBF belt.
The Fight took place on Glenn’s home soil and over the 12 rounds, McCrory dominated the Kenyan, for a 118-110, 116-111, 118-111 victory, gaining the World Title and fulfilling a lifelong ambition.
It was a far cry from his defeat to Hughroy Currie and proves its not the losses, but how you deal with them.
Around this time, Glenn got involved in Boxing punditry after an offer from Sky Sports to front their first ever boxing show with Ian Darke. Glenn was a natural in front of the camera’s and impressed everyone with his straight talking, no nonsense approach.
Alongside his increasing TV work, the Geordie bruiser then went on to defend his IBF Title with a unanimous points against the South African, Siza Makathini. But in his second defence, was found wanting in a tough match-up with the hard hitting American Jeff Lampkin and suffered a third round KO.
Moving into 1991, he thought the time was right to move up to Heavyweight.
Glenn put on nearly two stone and after an easy knockout of Terry Armstrong, came up against a young up and coming fighter by the name of Lennox Lewis and suffered a second round defeat, which is no shame against one of this era’s greatest heavyweights.
After fighting three more times at Heavyweight, he was then given the opportunity to win back his old IBF Cruiserweight belt in 1993.
He flew to Russia to take on American Alfred Cole, who had beaten every man he had faced at that point and lost a unanimous decision in what proved to be Glenn’s last fight, finishing with a record of 30-8-1 (12 KO’s).
After Boxing, Glenn signed up permanently with Sky Sports and along with Ian Darke, Adam Smith, Jim Watt, Johnny Nelson and Dave Clark is to this day, among the best loved Boxing commentating team in the fight game.
He also gained his trainers license and opened a gym in the Newbiggin area of Newcastle, where he spends a lot of his time giving back to the sport where he gained so much.
QUESTIONS AND ANSWERS ROUND:

When and how did you get into Boxing Glenn?

“Boxing was in our family really, my grandad’s brother fought Spider Kelly at the Ulster Hall in Belfast, my grandad was also a boxer in his own right too.” I was always into sports and loved watching Ali and George Best as a kid, but boxing was just a natural thing for me really.”
What was your first gym and who was your first trainer?
“I started off at Consett Gym with Johnny Cuthbert, It was seven or eight miles to get there but I loved it.”
What was your amateur record Glenn?
“I had 64 fights, won 56 and also claimed the Junior ABA Title along with representing England.”
Toughest part of being a boxer?
“Probably making the weight for me, getting down to cruiserweight was tough as I had no nutritional advice, we were just left to do it ourselves, it was just a case of starving yourself you know.”
Best sparring partner?
“Has to be Mike Tyson, I sparred 96 rounds with Mike when he was at his best and even gave him a blackened eye which he still talks about to this day.”
Toughest opponent you faced?
“I fought Lennox Lewis and basically got beat up for six rounds, but even saying that, I would have to say Patrick Lumumba. Our fight was on home soil for the World Title, he perforated my ear drum and adding into the mix the nerves of the night, he was the toughest opponent.”
Who do you wish you had fought Glenn?
“Evander Holyfield, he moved up to Heavyweight around the time I was number one contender, I heard Evander moved up because he was scared, yeah scared of killing me (ha ha).”
What is the best fight you have seen?
“The best fight? I’d go with Morales vs Barrera I, to be at ringside to see it too was amazing.”
The late Arturo Gatti has some great fights too but I’ll stick with that.”
Dream fight: Who v Who?
“Has to be a young Ali against a young Mike Tyson.”
Childhood Hero?

“Muhammed Ali, loved watching him fight as a kid, the interviews and stuff, he was great.”

Favourite boxer of all time?
“Sugar Ray Robinson, best of all time for me”
Best British Fighter?
“There’s been some great British boxers over the years, Randy Turpin comes to mind as he beat Sugar Ray Robinson. But as I never saw a lot of our great fighters fight, I’d say Joe Calzaghe for me, he beat every great fighter of his generation and remained unbeaten throughout his career, so Joe for me.”
Favourite Current fighter?
“Manny Pacquiao, he brings something different to the table every time he boxes.”
“I think the fight with Floyd will happen, it has too really, they will probably make more money off it now because of all the waiting and the hype over the blood testing.”
Who do you think we should like out for in the future?
“James DeGale, as long he gets on with his boxing, he could go a long way.”
What would you change in boxing Glenn?
“Everytime I go to a fight there is different rules for this organisation, different rules for that organisation.” “Sometimes they don’t even know what the rules are, so just have one set of rules for the whole of boxing.”
Who is your best friend in boxing?
“Boxing has been my life since I was 12, I have had the opportunity to work with some great people, John Rawling, Duke McKenzie, Johnny Nelson and Jim Watt. I am blessed with being in the family of boxing so to me they are all my friends. The whole sport is my best friend.”
What other sports do you watch?
“I am a big Newcastle United fan, I can see St James’ Park from outside my window and I also like Rugby too among others.”
QUICKFIRE QUESTIONS:
WBC or IBF? – “IBF.”
British or European Title? – “British.”
Holyfield or Haye? – “Holyfield.”
Cruiserweight or Heavyweight? – “Heavyweight.”
Mayweather of Pacquiao? – “Pacquiao.”
Mormeck or De Leon? – “Mormeck, I wish I could have fought Carlos De Leon, I would have punched holes in him (ha ha), Johnny (Nelson) got the chance, but I never did.”
Johnny Nelson or Jim Watt? – “Oh, its like saying my mum or my dad (ha ha), really cannot choose, so both.”