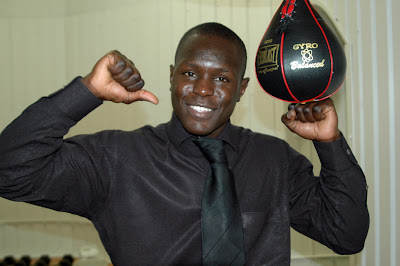 Stoke Newington’s Erick ‘The Eagle’ Ochieng is intending to celebrate the first anniversary of his fledgling professional career with yet another win. Ochieng, who had his professional debut, against Matt Scriven, on September 11th last year, is set to face Birmingham banger Dee Mitchell on the mega Goodwin Promotion’s ‘It’s Personal’ title double-header at the York Hall, Bethnal Green on Saturday the 11th September 2010.
Ochieng, who has a perfect 4-0 record, will be joining fellow Ultrachem TKO Gym mates, Mark ‘The Flash’ Alexander, ‘Phat’ Pat McAleese, Marianne ‘Golden Girl’ Marston, George Jupp, Behnam Dehghani and Joel McIntyre, who are also fighting on the Steve Goodwin promoted ‘It’s Personal’ event.
In his last fight, at the Goresbrook Leisure Centre in Dagenham back in May, Ochieng faced fellow unbeaten prospect Curtis Valentine. At the end of four grueling rounds super slick Ochieng was deservedly declared the victor by a 39-37 point margin.
The bout, billed as “The Battle Of The The Undefeated”, broke the normal protocol, where highly talented young fighters are heavily protected by their promoters and management, learning their trade against journeymen and other less talented fighters before facing someone of equal stature.
Ochieng’s manager-trainer,Brian Lawrence, clearly has a lot of faith in his young charge by choosing to buck the trend and put this exceptional talent to such a stern test so early in his promising career. His decision to do so may have been swayed in this direction by Ochieng himself, who had made a point, on more than one occasion, that he wanted to “step up and face more challenging opponents”.
Earlier in the year Ochieng packed his bags and traveled to Belgium to assist former IBC and European Welterweight Champion ‘Sugar Jackson’ Osei Bonsu prepare for his IBF welterweight eliminator against Randall Bailey. On his return to the UK Ochieng eagerly stated “It was a great learning experience. I can’t wait to put what I have learnt, being at Sugar Jackson’s camp, into practice.”

Then, just a few weeks before he faced Valentine, Ochieng told Boxing News’ Andrew Wake, “I don’t really want to be put in with journeymen. The better people I fight now will show my potential. If you are protected you don’t get better, if you are challenged in your early fights it makes you a better fighter in the long run.”

Taking a break following a sparring session, with Behnam Dehghani at the Ultrachem TKO Gym, Canning Town, ‘The Eagle’ said, “This fights just come up. I’ve just come back from holiday, It’s my first day back in the gym and I’m already sparring. I’ve had some real good sparring this year.
I’m really looking forward to the 11th September. It’s a good date for me. Last year I had my debut, this year I start the season off on September 11th.
It’s going to be another good performance from me. I’m already up for the fight. The world hasn’t seen my best yet . The best is still to come. I’m staying focused and I’m gonna win it.”
From a lesser talent, than Ochieng, these could easily be put down to bravado or publicist’s hype. You only have to watch him in action to know that he has what it takes to reach the highest echelons of his chosen sport.
Erick ‘The Eagle’ Ochieng versus Dee Mitchell will be on the undercard of the British Masters Lightweight title fight between Ryan Barrett and Mark ‘The Flash’ Alexander at the Goodwin Promotions ‘It’s Personal’ event at York Hall, Bethnal Green, London on Saturday the 11th September 2010.
Erick ‘The Eagle’ Ochieng video interview

Co-headline will feature undefeated Light Middleweight rising star ‘Phat’ Pat McAleese in a championship fight against a yet to be named opponent. 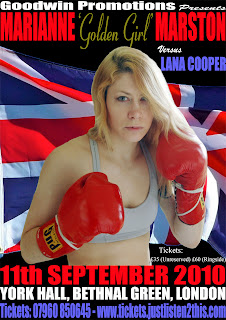