The British Boxing Board of control have released their latest fight notice circular, for up-coming British, English and European championship fights involving British boxers.
English heavyweight champion Tyson Fury is in line for a shot at the British heavyweight tile that is currently held by Dereck Chisora, who fights Wladimir Klitschko for the heavyweight title on April 30th. It isnt believed that Chisora will relinquish the belt before the fight with Klitschko, with the show and Chisora carrying more kudos when he is introduced has the British heavyweight champion. Either way Fury fights for the Lonsdale belt and the board will decide when at a further meeting.
Danny McIntosh  who won the European light-heavyweight title last month is in line for a crack at the Lonsdale belt on the back of his fantastic continental success. McIntosh will face the winner of Nathan Cleverly and Ovill McKenzie who contest the famous belt in a rematch bout between the pair. The first fight was a real humdinger, with Bellew eventually prevailing with an 8th round stoppage after dragging himself off the canvas earlier in the fight. There is nothing to suggest that the return wont be more of the same. 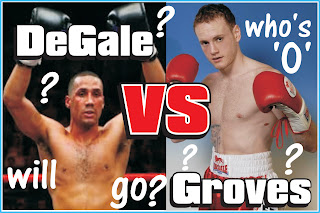 Big news this week for fans of James DeGale and George Groves was that they have finally been able to agree terms over contracts and with purse bids for the fight being won by Yorkshire based promoter Dave Coldwell, this fight will happen some time this year with DeGales British title and Groves’ Commonwealth Super Middleweight Championship on the line. The pair once met as amateurs, with Groves coming out the winner on that occasion on points. The fight will almost certainly take place on the undercard of David Hayes third defence of his heavyweight title. Below is the round-up and insight to all the latest domestic fight details from this months board meeting.