Here is the full Conference video courtesy of www.boricuaboxing.com and quotes from the presser.

I don’t talk much. I let my fists do the talking in the ring and come Saturday I’ll be the new unified champion. Were both powerful, both quick and exciting to watch. It’s going to be a great show. It’s going to be an exciting fight, if you hit me once, I’ll hit you twice back because I’m a warrior.”


“People have been getting this stuff about Zab Judah, 33 years old, is an old fighter, mixed up. What you gotta understand is that I turned professional at 18 years old. I was champion by 20 years old and I reigned ever since.”

“I’ve got my second wind. I’ve lived my years as Zab Judah just being Zab Judah, tough guy, Brooklyn, whatever. I’m here to say today, that don’t pay man, just live your life and be happy. Saturday night I’m gonna give you guys the best Zab Judah that you guys are looking for. He’s here!”

We have a tough fight ahead of us. Zab is a great fighter and we watched a lot of tapes of the ‘new’ Zab and we’re ready. We had a great camp, 10 weeks with no traveling, no jet lag.” 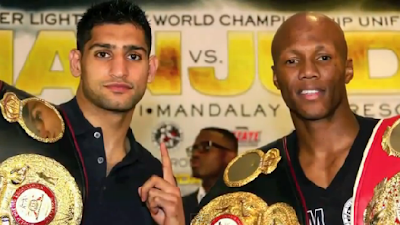 “Zab’s done everything I’ve asked him to do. It’s been a wonderful training camp. He’s in good hands with me. We’re gonna make sure the young fellow [Khan] makes it back to England. Safe. Healthy? I don’t know.”

“Put your seat belt on, get your popcorn and get ready. It’s going to be a show.”

Alex Ariza, Khan’s Strength & Conditioning Trainer
“Zab is very skilled we don’t take him lightly at all. There’s going to be fireworks on Saturday night.”

The left side of the table [Judah’s side] is living in the past. Golden Boy is living in the future and that is on this side of the dais [Khan’s side]. On the undercard we have Jamie Kavanagh, Ronny Rios, James Kirkland, Peter Quillin and Gary Russell Jr., who have a combined record of 89-1…We have the young stars behind us sitting here with Amir Khan. Amir and these young fighters are the future of boxing.”

“Amir Khan has a tremendous following after his win over Paul Malignaggi and his ‘Fight of the Year’ with Maidana. For Amir to come back to the U.S. for this fight against Zab Judah shows he’s a true champ.”

“This is truly a battle between two of the most exciting fighters in the sport and I’m excited to be a part of it.”

This is the fight that Zab Judah wanted. We are so happy to be here and delighted that this fight was made. Everyone on Team Judah agreed that this was the right fight.”

People say this is a classic case of youth vs. experience, but there are many interesting story lines in this fight.”

“They’re both tremendous fighters at 140 lbs. Amir Khan has speed and youth while Zab Judah has only lost 1 fight at 140.”

You know when Golden Boy comes, it’s not just a good main event but a great undercard too.”

Khan vs. Judah, a 12-round WBA and IBF Super Lightweight World Championship Unification fight, is presented by Golden Boy Promotions and Main Events in association with Khan Promotions and Super Judah Promotions and sponsored by Cerveza Tecate and AT&T. – In the United Kingdom, the event will be broadcast live on Primetime Pay-Per-View, channel 480 on Sky for £14.95 at 1:00 a.m. BT.