McDonnell vs Hall Who will claim Bantamweight Bragging Rights? 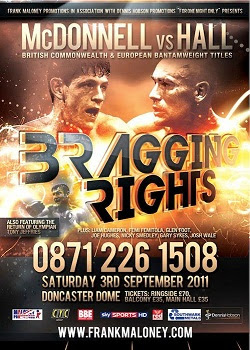 The holidays are near but over, the kids are going back to school and its been a quiet time for summer sports.

For us fight fans, the British boxing season is here and promises to be one of optimism, with some cracking fights in the diary and some good potential match-ups on the horizon.

It is all gloved up to begin this Saturday night for real at the Doncaster Dome when Jamie McDonnell and Stuart Hall contest the British, European and Commonwealth bantamweight titles in a fight fit enough to grace the official boxing curtain raiser.

Local hero McDonnell, has been in a rich vain of form since his two back to back defeats against Chris Edwards in December 2007 and then Lee Haskins in March 2008. Unbeaten now in three years he is on a nine-fight winning run, which had him claim the Lonsdale belt and commonwealth strap against Londoner Ian Napa last January in a fight he wasn’t fancied to win at the time, but he was to win, be it a close decision.

But that win against Nappa and the status of being champion seemed to inspire McDonnell to a next level and in his next fight just two months after his domestic title win, he went over to France to stop Jerome Arnould in 10 rounds to add the European crown to his impressive collection of gongs.

McDonnell 25, defended the European title against Rodrigo Bracco to end a prosperous 2010, before following that success with two wins in 2011, outpointing Stephane Jamoye and Nick Otieno.


McDonnell’s quest to defend and hold his European title, saw his treasured British bantamweight title fall into the hands of Stuart Hall after he had relinquishing it. Hall then wore down common foe Ian Nappa in June 2010 to win the vacant belt and set on course the inevitable clash with McDonnell.

‘Stuey’ Hall 31, from Darlington is unbeaten in 12 fights and came from no where to beat Napa before brushing away Martin Power, Gary Davies, and John Donnelly during a 10-month reign that seen him win the Lonsdale belt outright after the required 3 defences of the famous British boxing treasure.

Hall has only been a professional fighter for three years and still works as a Roofer by day, his rise to prominence has been as swift as McDonnells and this is a fight that has quite simply made itself. And so the two best bantamweight boxers in the country will finally get to claim bragging rights in there division with the winner hoping promoter Frank Maloney can secure them a world title fight.

BB Prediction: McDonnell’s experience fighting at European level should see him overcome a tough game Hall who pushes him all the way. It could be the type of fight that is judged differently by the observers and a majority decision in favor of McDonnell is a possibility, either way I can see McDonnell just nicking it over the distance.