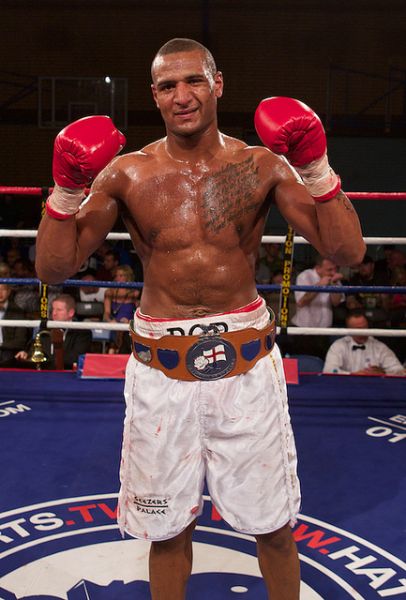 Bob the thing that jumps out to me when I look at your record is that since you turned pro in November 2007 and after a busy 2008-2009, you have only had 2 fights since 2009! What has been going on?
Yeah Its been quite frustrating for me over the past few years, after I had a good start to my career, I got up there quite quickly I had some good wins and beat some good opponents so from then on I was avoided and I was ducked, no one wanted to fight me is the reason. I just didn’t get the opportunities I deserved, I didn’t have a big time promoter backing me, so it was even more difficult, no one would fight unless they had to!
I feel I have all the ability and talent been labeled as awkward when I just use my skills. and Ive been left on the shelf after I got to that point. past two fights have been title fights.

I haven’t had any tune up fights in between. had some managerial issues also where I felt they weren’t doing enough to ensure I was boxing, saying the same thing telling me what I wanna hear and things are coming that never materialised.I didn’t get pushed just waiting andto many big gaps in between, due to not being able to get fights has been frustrating for me to say the least, so I had to move on.

I now see the up coming guys keeping being busy and this is how I should of been then, to keep progressing and moving forward. Being inactive n turn leads to people to forget about you really. A fighter like me needs to be fighting regularly, I never had the luxury of fighting journeymen having my record padded and tune up fights, most of these guys now might have had a few fights but who have they fought? nobody’s!

You entered the Prizefighter in 2009, unbeaten in 6 fights going in but lost in the Quarters to Carl Dilks, looking back on that now, were you glad you entered it and do you feel you should have got the nod over Dilks?

I definitely felt I won that fight along with all the spectators and commentators who felt the same, even his corner thought I’d won it! I was robbed but there was some dodgy decisions going on that night. I don’t think The Prizefighter really did me any justice you’ve got to start fast, I was just getting going, Im suited better over more round fights. Even up-to now I see a lot of dodgy decisions in Prizefighter with the scoring where one guy blatantly wins but doesn’t get the decision, quite baffling really!

After the Prizefighter you came back with two good wins one of them over Ovill McKenzie and then got the shot at Tony Bellew’s Commonwealth title. But when the fight finally came around you’d been out of the ring for almost a year. That must have had a bearing on your performance? Having said that you performed well and there were a lot of people who thought you won that fight!
Yeah a lot of people felt I won that fightand I felt I did too, but didn’t get the decision. But the scoring was bias being on Frank Warren’s annual show and being Bellew’sfirst defence, I wasn’t going to get the decision unless it was KO. They were trying to build him up on Sky etc. I had prepared well for that fight had a good camp so I was ready and I showed it in the fight, how I performed and how good I was. But yes it would of been nice to of had a tune up in preparation before that title fight
You had him down in the fourthand in the last two rounds Bellew looked tired, do you feel maybe watching it and looking back on that fight you should have pushed him more, could you have give more and do you wish you had?
Well yeah after I knocked him down with straight left in the 4th, I started out boxing him really and making him miss, I must of won most of the rounds from then on!He came out in the beginning trying to knock me out but couldn’t. So he won first few rounds and then I turned it round, I took him the distance it was a tough fight.
Yeah I was still boxing strongly even up to the last round which I must of won, but I didn’t get the decision.  I’m not going to say I should of done this and that, I boxed well in that fight which some say I should of won and gave a good account of myselfwhich ever way you look at it. Afterwards that’s why I was offered the commonwealth title fight first when he vacated it, but due to communication failure and the late notice I had, I didn’t end up boxing for it again.
Again you were out for a while before stopping Darren Stubbs to win the English title in your last fight in 2011 after the ups and downs it must have been satisfying to get your hands on that belt?
Yeah very satisfying to have accomplished that, also the manner I dismantled him in I felt I was above that level. Then I should of been made mandatory for the British title and I was looking forward to being out shortly afterwards.But again my career stalled and I was left waiting around, promised things and fights fell through which have kept me outwhich was annoying for me going from title fight to title fight with nothing in between.
Next up for you is the first defence of that belt against Travis DickInson, (15th December) he’s unbeaten and is a fighter of big ambition too, I’m sure your not taking him lightly. How are you physically and mentally in your camp now and how relieved are you to finally have a date set and the chance to kick-start your career
again?

Yeah now I have a defence of my title coming up, physically im in great shape and mentally I have belief and I’m staying focused on getting the job done successfully and having a good year for myself and then next year getting to where I should be.So I’m not allowing anyone to take what Ive got, its been hard work for me to get it in and out the ring. So I have my mind on my future and where Im going. I‘m not overlooking him, I’m going to take care of business come December 15th.

I was supposed to defend back in May, I had a good camp as I helped prepare Carl Froch for his fight with Lucien Bute, so I had a lot of top sparring which brought me on. But even now I’m putting in work in the gym and had some good sparring with the kids in our gym too so I’m feeling good, would of been nice to have been more active and had few fights prior but this is how its been down to no fault of my own, so Ive just got to be on top of my game  and stay ready! I have the experience of being in big title fights and I’m the champion now and thats how its staying. I have my own plans for my future!