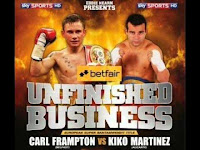 On a wild night at Belfast’s Odyssey Arena. Carl Frampton gave the
performance of his career as he ripped the European Super-Bantamweight
title away from tough Spaniard Kiko Matinez after 9 pulsating rounds.
Frampton known as “The Jackal” performed so calm as he was put under so
much pressure from the experienced champion. Those first four rounds was
probably Frampton’s toughest of his career as he was continually on the
back foot using his speed of hand and foot to keep Martinez off him.
At the weigh-in the previous day Martinez gave Frampton the old cut
throat gestures obviously hoping to get under his younger opponents
skin. What was impressive was the way Frampton (8st 9 1/2 lbs) never
deviated from his fight plan when he was under that pressure. I wrote in
my notes that Frampton was boxing like an experienced fight, in fact
Juan Manuel Marquez like. Martinez (8st 9lbs) came out in the first like
a madman going after the Irishman. Frampton boxed beautifully though as
he was able to jab and move whilst blocking most of Martinez shots. The
second was better for the Spaniard as his left hook was beginning to
land to the body slowing Frampton down. Frampton was also being kept on
the ropes that little bit longer. More than enough for the Martinez to
win the round on my card.
The third and the fourth were also close rounds to score. Frampton on my
card took the third as again he was able to get that gap needed to
deliver his own hooks and uppercuts. Martinez rallied in the fouth and
looked to have rocked Frampton slightly near the end of the round with a
left hook. Great fight.
The pace of the fight had to slow at some point and in the fifth
Martinez definitely slowed down a bit. The Jackal was landing more in
this round and even stood in front of the champion out slugging him. To
my surprise Martinez came back stronger in the sixth. It now looked
liked Frampton was tiring. Martinez work rate was immense especially
against a younger fresher fighter. Round seven saw Frampton fight inside
again with Martinez, he took the fight to the champion, body punches
began to land at will. Martinez still threw leather in response but it
was a Frampton round.
Martinez seemed to get his second wind at the start of the eighth. Again
he came out flying trying to land his bombs. Frampton again was on the
move and covered up well. Late in the round a counter hook seemed to
catch Martinez high on the head. For a brief second his legs didn’t look
stable but the old champion fired back in defiance.
When the fight came to the end it was sudden. After a great battle and
with many press and fans having this fight close Frampton ended the
fight with a perfect counter right as Martinez went straight at him. At
this point in the fight two of the judges had Frampton ahead 78-74 and
the other 77-75. I certainly agree with the latter. When Martinez hit
the deck it looked as if he would get up. His legs betrayed him though
as he fell back towards the ropes giving Finnish Ref Anssi Perajoki no
choice in ending the fight.
Frampton will now move forward with Promoter Eddie Hearn mentioning a
possible WBC or IBF title shot. Marinez i think would be a great
opponent for Scott Quigg who was in the crowd to watch his 122lb rival.
Below is my scorecard and all the scores i was able to collect from the
Boxing Press plus the Boxing fans from Twitter and the best boxing
forums.

TOTAL : 77-75 Carl Frampton at the time of stoppage