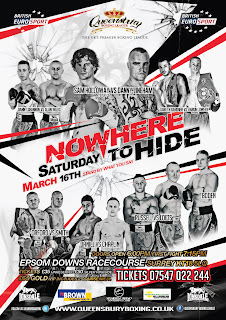 5th March 2013
After cementing their position as a genuine contender in boxing’s busy promotional market place last year with their successful run on British Eurosport, the promotional team behind the innovative Queensbury Boxing League have promised fight fans an explosive start to their new 2013 season starting on Saturday March 16th when the show returns with one of their most anticipated line ups in the competitions short history.
Rising from relative obscurity over the last eighteen months after establishing their new boxing brand back in 2011, the show has seen its status go from promotional contender, to a genuine force on the UK’s competitive boxing landscape, and the team behind the shows concept believe that the next twelve months will see the show become one of the most exciting boxing platforms on television starting with the March 16th event.
The brainchild of former professional boxer Ross Minter and promotional partner Alan Foley, the league has gained a huge following amongst both traditional boxing fans eager to see genuine competitive fights, and a new breed of casual fans that have been drawn in by its fast paced format, and the promotional duo believe the formulae is going to help bring boxing back from doldrums and help generate a new wave of interest in the sport.
“If you are fan of all action boxing where the outcome is in the balance in every single fight, then the Queensbury Boxing League will definitely push your buttons, commented Foley.
“The league’s success both at the live events and on TV is down to a mixture of fantastic match making by Ross which ensures every single fight on a Queensbury show is competitive and exciting, and the way we deliver that show which makes every single one a real night of entertainment”
“2012 was a great year for the show, and with the Eurosport coverage across the UK and its introduction into the Asian sports market on ASN, we really have opened the market up and given boxing fans something to get excited about, but that’s only the beginning and on Saturday March 16th you are going to see the new era in competitive boxing unleashed and it going to be one hell of a night.

The show Foley refers to will be the league’s aptly named “Nowhere To Hide” promotion being staged at the Epsom Downs Racecourse in Surrey, and with seven title fights on the card headlined by the clash between Northampton’s Danny Lineham and Ramsgate’s Sam Holloway for the league’s version of the English Middleweight title, Minter has assured fight fans that there will be no shortage of action for those lucky enough to see it live.
“I’m looking at the line up for this show right now, and I can honestly say that all seven of the title fights taking place on this show are worthy of being the main event, remarked Minter.
“You have Lineham versus Holloway topping the bill for our vacant English Middleweight belt who are both undefeated in the league, three weight champion Gareth Gardner stepping down to Light Middleweight to face our reigning British champion Aaron Lowery which is a cracker, and our former British title challenger Nathan Leeson facing Alan Wilks for our English Light Middleweight belt. All of these fights are contenders for fight of the night, and that’s only three of the fights on a twelve fight card.
With the show being filmed for British Eurosport as part of the six show season on the channel, fight fans can look forward to seeing the pick of the action from the March 16th event towards the end of March when the two hour special will be aired, and with a busy season ahead and further broadcast deals in the pipeline that will see the show cross the pond into the lucrative American market, the Queensbury Boxing League looks set for big things over the coming year.
For more information on the shows line up, log onto www.queensburyboxing.co.uk
Sam “The Hammer” Holloway Interview
Danny “Dynamite” Lineham Interview