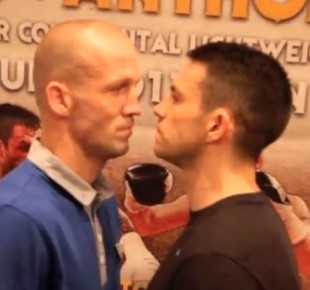 Video: Smith and Dodson in Heated Face-off ahead of Rematch 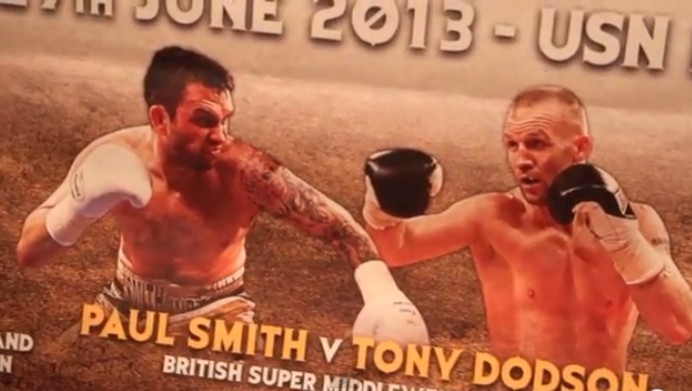 The Liverpool rivals were heated as they went head-to-head in Manchester, and Smith is confident he’ll beat Dodson for the second time as they provide the chief support to Gavin Rees vs. Anthony Crolla in Betfair’s ‘Rock & Croll’.

“I cannot wait to get back in there and show what I can do, to perform and to be showcased on Sky Sports again, having people sitting up and actually being able to watch the fight,” said Smith.

“I’m hungry to get my belt back. That’s the plan and that’s what I am going to do and I am going to put in a very good performance on Saturday night.

“I know what I’ve got. We can talk about the last fight but this is three years later, I think we’ve both changed since then and I think we’ll see a different fight on Saturday, a more open and better fight.”

Smith defended the British title against Dodson back in March 2010, managing a pair of dreadful cuts sustained early in the bout to hold Dodson at bay. The challenger that night has moved up to light heavyweight and now back down for a fourth attempt to land the belt, and the 32 year old admits it’s all or nothing on Saturday.

“My whole career is on the line,” said Dodson. “It’s a massive fight, the most important of my career. I know what’s at stake and it’s given me more incentive to want to get the win because, obviously, he got the win over me last time.

“The pair of us prepare perfectly. I’ve got no excuses, I’m a totally different fighter from what I was last time. I’ve got no weight issues, I’ll get on the scales now and will probably be under the championship weight already.”

Smith and Dodson are part of a cracking night of action in Bolton, with the lightweight blockbuster between Gavin Rees and Anthony Crolla leading the way. Unbeaten super bantamweight star Scott Quigg returns to action against Brazilian William Prado, Blackpool’s light middleweight Brian Rose clashes with Alexey Ribchev, Erick Ochieng warms up for his British light middleweight title clash in the autumn against Liam Smith with a six-rounder, Team GB captain Thomas Stalker is looking to move to 5-0 at the start of his career, Betfair Prizefighter Welterweights finalist Dale Evans and Cruiserweight champion Wadi Camacho are both in action.