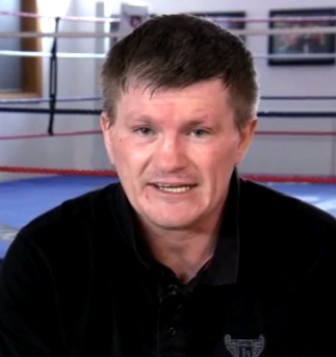 ‘The Hitman’ Ricky Hatton now a successful promoter says Bradley Pryce will get a “shock” when he faces his fighter Sergey Rabchenko in Bulgaria on Saturday night. Pryce agreed to take the European and WBC silver light-middleweight title clash after French southpaw Cedric Vitu sustained an injury and Hatton says the Welshman doesn’t know what he’s let himself in for.

Rabchenko previously defeated the Pryce on points in 2011, but ‘The Hitman’ believes he’s a different animal now and will score a stunning stoppage this time around. “It might sound like I’m being arrogant, but I like to think I’ve added a bit more fluency to Sergey’s game,” said Hatton, who took charge of Rabchenko’s training early last year. “He was a little bit like a typical eastern European when he fought Bradley Pryce last time and went back in straight lines. Now he sets up his attacks, he’s a lot slicker with his defence, he feints and he’s less obvious than he used to be, so I think Pryce will get a shock.

“It’s a change of opponent and a change of styles [from Vitu], but Sergey’s beat him before and if he’s as good as we think he is, he should take care of business in better style than he did last time. I think he’ll stop him.”

Despite already holding a victory over Pryce, Rabchenko cannot afford to be complacent as a slip-up would likely cost him a world title opportunity in 2014.

“The fact that Bradley Pryce is in a position to challenge for the European and WBC silver belts shows he’s a good fighter and Sergey has got to show him the respect he deserves,” Hatton said. “Sergey is number one for Mayweather and even if Mayweather decides to move down to welterweight, Sergey knows he’ll get a shot at the vacant title so he can’t afford to lose on Saturday.”

Hatton talks about his prospects Sonny Upton and Ryan Burnett