Smith and Rowland on a telepathic level 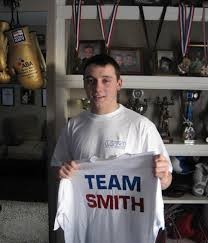 Super-featherweight ace Mitchell Smith and trainer Jason Rowland say their relationship is so close that it’s on a telepathic level. The dynamic duo are preparing for their English title challenge at the Copper Box Arena on Saturday 12th April, with Smith – the current Southern Area Champion – facing unbeaten Peter Cope from Hartlepool, live on BoxNation (Sky Ch. 437/HD 490 and Virgin Ch. 546).

Harrow Weald’s Smith and Rowland, a former British and WBU World Light-Welterweight Champion, have been working together tightly together since Smith turned professional in June 2012 and is unbeaten in eight fights. Smith said, “We’re very much alike in our thinking which might stem from me living in Jason’s house for the first year of my career and spending hours and hours together in the gym and at home which has meant we have formed a very strong relationship.

It’s a special bond between a fighter and trainer,” “When we’re in the gym he can anticipate everything that I’m going to do and I can anticipate what he is going to say.  I’ll be throwing punches on the pads and it gets to the point where he doesn’t have to say what combinations to throw, it just flows, it’s brilliant, it’s like we’re telepathic,”

“I trust Jason implicitly with my career.  He knows his boxing, he’s been there, seen it and done it, he’s been involved in big British and World title fights, he understands when the going gets tough in a fight because he’s been there,”

“It’s another step up for me against Cope, we’ve had almost the same amount of fights, he’s unbeaten and so am I, it’s going to be a cracking fight with another title on the line.  I’ll be too fast and strong for Cope though, he’s tall at the weight but when he takes one of my shots I think he’ll know he’s out of his depth,”

The 22-year-old returned to action last month for the first time in five month following a hand injury, and blasted out unbeaten Welshman Mark Evans inside two rounds. He added, “Against Evans I showed that my hands are fine and I’m raring to go this year.  Winning the English title will be fantastic step up for me and give me a boost as I target a British title by the end of the year,”

“I aim to keep busy and put in the performances that keep my fans happy and the press writing about me.” Rowland, who retired from the ring over a decade ago, is delighted with Mitchell’s progress and has high hopes for the youngster.

He said, “We get on fantastic and the best thing is it’s made me a much better trainer,” “He’ll come into the gym looking to try something new on the pads or in sparring that he’s thought of and I will have come up with the same thoughts as well, it’s unexplainable,”

“I’m glad I’ve got this special relationship with Mitchell and click the way we have.  I’m really excited with him and it’s hard not to get carried away because he’s a super kid with phenomenal talent and I really believe he’s British boxing’s next big thing,”

He’s the all-round package, he’s got a great boxing brain, he can punch hard, superb fitness, tremendous balance, but I feel his biggest attribute is his timing and distance and the way he can makes his opponents miss,”

“I really believe in him and I know he can go all the way to a world title.”