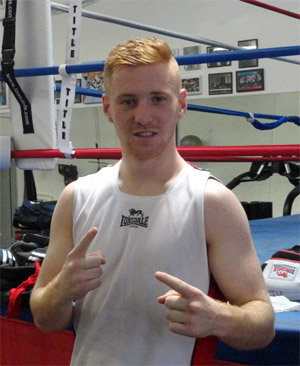 John Quigley has gone from Liverpool to Hollywood and back again – and he couldn’t be more pleased. After spending months training in some of the toughest gyms in The States, as well as three winning fights in America, John tops the bill at the Greenbank Sports Centre on Saturday April 26 and enters the contest with his confidence sky-high.

Bored on Twitter one day, Quigley spotted a request for undefeated prospects to train in former pro Tony Jeffries’ Los Angeles gym. Passport in hand, John jumped on a plane and found himself at Jeffries’ ‘Box N Burn’ sweatshop, as well as sparring at the famous Wild Card against some of the world’s best. A trio of stateside wins have since taken the Scouser to an 11-0 ledger, and onto the brink of an English title fight.

“I gained so much self-belief from going over there, and going to The Wild Card,” recalled the 23-year-old. “I was sparring the likes of Chris Avalos and other big names ranked in the world’s top five. Name after name, and no one touched me. I’ve always known what I could do, and my style is hard to fight against, but when you do it in the Wild Card, with these kind of fighters, it makes you come back with so much self-belief and confidence. I now know how far I’m going to go.”

John gets his first title fight at the Greenbank, in a show streamed live/FREE on VIPBOXING.TV, when he competes for the British Masters super-featherweight title. If he wins, the likeable Liverpudlian then goes into the biggest fight of his career when he fights for the English featherweight strap on June 7.

“I can’t wait for this fight at the Greenbank. Every time I think about it I get shivers. Going to America has made me more known and more people want to come and see me. My style is entertaining; no guard and relying on my reactions. People want to see something different and they’ll think ‘he’s mad, fighting like he does’. I just want to put a show on for Liverpool, I’m looking to impress and show my improvements.

“I’m ready for it; I can’t wait,” explained Quigley on the forthcoming English title date, of which no opponent has been named but nine-fight undefeated Mancunian Ryan Doyle is in the frame. “If it is Doyle then he’s unbeaten and I’m unbeaten. It’ll be a great fight and I’ll come out the winner.”

Promoter Steve Wood said: “UK promoters and fighters know how good John is and he’s been a nightmare to get matched. Going to America has done him the world of good. He’s a very special talent, and the reports we’ve had from the States are that he was very impressive against some excellent fighters. John is a real entertainer and the fans that come along, or watch on VIPBOXING.TV, are going to see a real show. This is his first title and we’ll progress quickly from here down at featherweight.”

Tickets, priced at £30 (General) and £60 (Ringside), are available from all boxers or at http://www.vipbe.co.uk or can be purchased on the door.