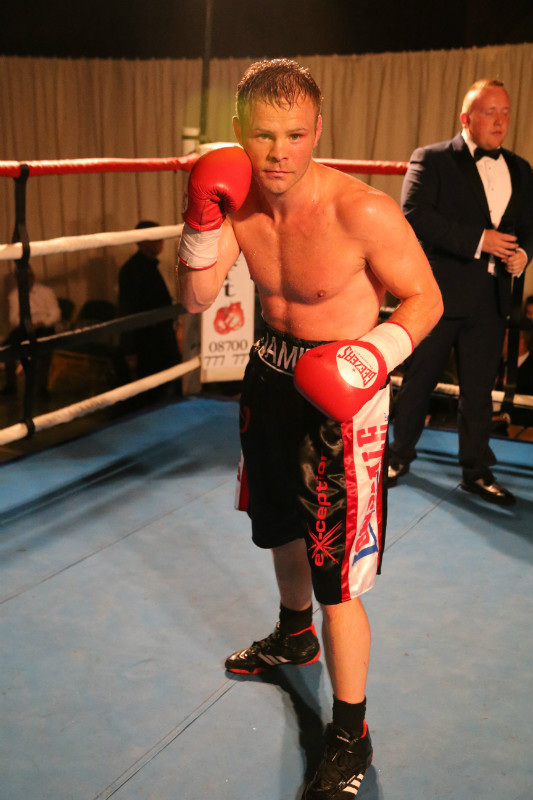 Jamie Spence wants to celebrate his 10th year as a professional boxer by chasing down the British welterweight title.

‘Mr Excitement’ has struggled with inactivity since a points defeat against Derry Mathews in 2012, fighting just twice in four years.

However, ahead of his ring return on Hatton Promotions’ ‘St George’s Day Clash’ show at The Deco in his native Northampton on April 23, Spence is ready to make up for lost time.

“It’s my 10th year as a professional and if I can be active enough, I believe I’ve got it in me to win titles,” he told www.uko-boxing.com

“It would be nice to get a shot at the British title. That’s the aim at the moment and we’ll take it from there. I want to be busy and get up the rankings.

“After being in with Derry Mathews and being comfortable, and sparring the likes of Martin Gethin and Ashley Theophane, I know I can hold my own at that level.”

It’s been a frustrating couple of years for the Northampton scrapper. Niggling injuries and work commitments mean that back-to-back points wins over Tamworth road warrior, Matt Seawright, are all the 31 year-old has on his record, which stands at 12-4.

Now though, fully aware he is drinking in last chance salon in terms of achieving his Lord Lonsdale dream, Spence is ready to make up for lost time.

“I had a few injuries and it was difficult because of work commitments too,” Spence confirmed. “Work played a big part in it, because I had lots of stuff going on and it was difficult to commit to training because it takes up so much time and takes a lot out of you. It was hard.

“Boxing isn’t like football. It’s not a sport you can play at. If you play at it, you get hurt.

“I want to be more active now. I’ll have this fight and as soon as it’s over I’ll look at when I can box again next.”

Spence fights in his hometown later this month on the undercard of Pauly Upton and Terry Maughan’s clash for the vacant Irish super-welterweight title.

Pauly Upton plans to land the Irish title this month before taking it ‘home’ to defend on the Emerald Isle.

The 27-year-old super-welterweight, like his brothers Sonny and Anthony, is fiercely proud of his Irish heritage and spent much of his decorated amateur career across the water.

However, he is yet to fight in Ireland as a professional and wants to put that right after getting past Terry Maughan on April 23.

“We’re all proud of our Irish roots so it will be great to win the Irish title,” Upton said ahead of his top-of-the-bill scrap on Hatton Promotions’ ‘St George’s Day Clash at The Deco, in Northampton.

“I won the Irish championships as an amateur and that was a big deal for me. So it will be an honour to hold the belt as a professional.

“I’ve never boxed in Ireland as a pro yet and I definitely want that to happen sooner rather than later. I spent a lot of my amateur career over there so it would be nice to fight back there this year.”