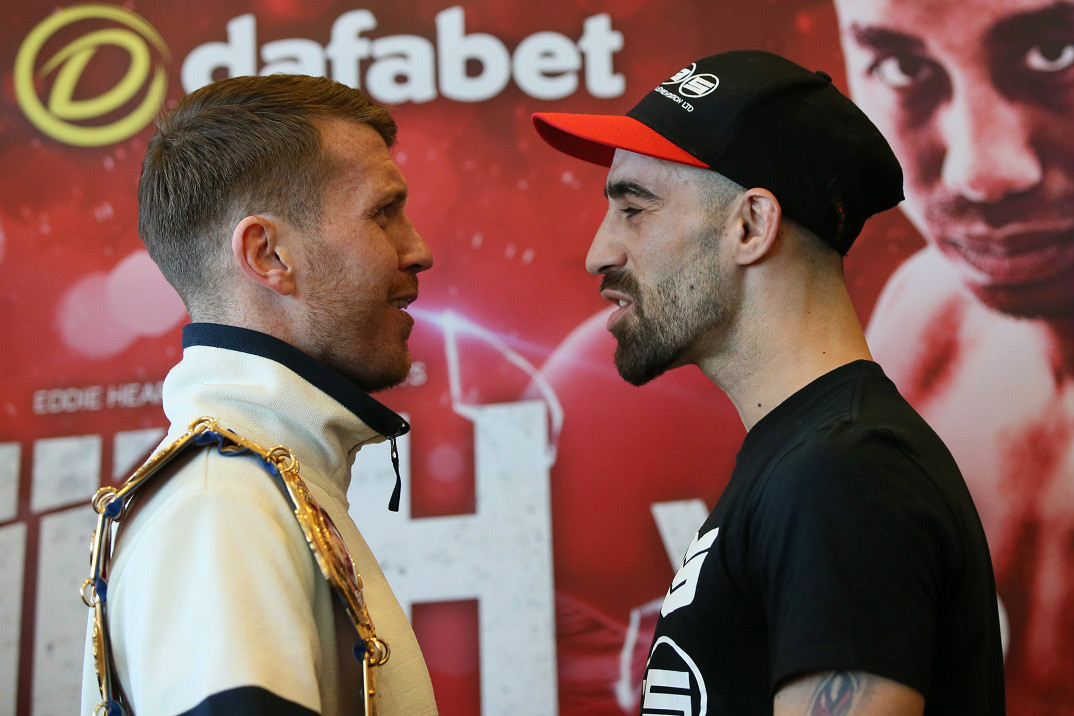 “Time’s a healer, right? Not when your fighter is on the end of a widely-accepted, contentious British title defeat and then contemptuously disrespected afterwards.”

In November 2015, British lightweight champ Scott Cardle was given the shock of his life by Birkenhead’s Sean ‘Masher’ Dodd, being convincingly outboxed and cut before controversially – a blow to the back of Dodd’s head seemed to have a major impact – stopping him in the last round of their title fight. Inevitably, the subsequent outcry resulted in last Saturday’s (April 2) rematch at Liverpool’s Echo Arena, which again saw another sour ending for the challenger.

Cardle danced around the ring but threw little for the first half of the fight, while Dodd appeared to force the action. The pair engaged more as the action slowed but, heading into the last round, the feeling the title was about to change hands was echoed by trainer Joe Gallagher who informed Scott he needed a KO to win.

With Lytham St Annes’ Cardle appearing to clearly lose the last session, it seemed inevitable that ‘AND THE NEW’ would reverberate around the arena – only for a Majority Draw verdict to be announced. Hence, the champion retained and returned home with his belt, while Dodd’s only comfort was the overwhelming feedback – at ringside and on social media – that he’d suffered another injustice.

Afterwards, with Masher naturally upset but magnanimous in defeat, Cardle dismissively referred to his opponent as a ‘small hall fighter’ and inferred he wasn’t interested in a third meeting, nor in giving Dodd another ‘pay day’.

Furious with the verdict and Cardle’s comments immediately after the fight.

“We knew Cardle would dance and put a lot of movement into the early rounds but the fact he wasn’t throwing anything and Masher was forcing the fight means he won those rounds.” said Dodd’s manager Steve Wood as he reflected on the weekends events.

“Then when Cardle had to fight he was only catching Masher in small bursts, which Masher covered and then came back with more. So Sean didn’t lose the early rounds and he won the later ones, and everybody has said the same. I’ve had texts from numerous well-respected boxing people disgusted at the verdict.

“I don’t think the judges are ‘bent’, but I do think they were influenced by the Gallagher home corner, and by the ringside shenanigans of Cardle’s dad. I think it’s affected their views because they must’ve watched it back and realised they’ve made big errors. From my point of view, the Board really need to look at these bad results and put someone in charge of these referees and judges. Maybe use some of their funds to set up some kind of school for them because they’re obviously incompetent.

“I know Scott personally and I like him but was disappointed in his reaction afterwards, calling Masher a small hall fighter. It’s disrespectful to Masher and other fighters who’ve come up the same way, people like Josh Warrington and Terry Flanagan. Josh is one of the biggest ticket sellers in the country, and has already personally sold more tickets for Leeds next week than the boxers altogether on Saturday’s Liverpool show, and he came through the small halls. Flanagan took 600 to Liverpool when he fought Derry Matthews, and he’s come through the small halls. With Cardle being one of Eddie’s [Hearn] first signings, Eddie’s got him good money and poor opponents, but it’s not given Cardle a proper perspective on what boxing is really about. He was taken around the country and has no following, maybe if he had fought on local small hall shows he would have, like Masher.

“When he said he’s given Masher two paydays, it’s actually the other way around because if it wasn’t for Masher’s ticket sales then he wouldn’t have been getting paid as much, because the big draw was Masher. Eddie and Sky are to blame for being too soft on these GB fighters who just turn up with a kit bag and expect good money. If he’d come through on my shows he’d be a better fighter and a bigger draw.

“We’d have the rematch, but they know that Masher has his number. They’ll run a million miles. Eddie has asked us to fight for a title on the forthcoming Tony Bellew show so we’re moving ahead. But if we have to move back to fight Cardle, it’s a fight we’d love because we like to win the British title. We’d give him another payday but we can move on without him, but I don’t think he can move on without meeting Masher again because everyone knows he lost. He called Masher ‘bang average’ but the ‘bang average’ fighter has beat him for around 18 out of 24 rounds, so what level does that put Scott at!” added Wood.

FULL FIGHT VIDEO – CARDLE VS DODD II – MAKE YOUR OWN MIND UP, WHO DESERVED TO WIN THE REMATCH?

WHO DESERVED TO WIN THE FIGHT?