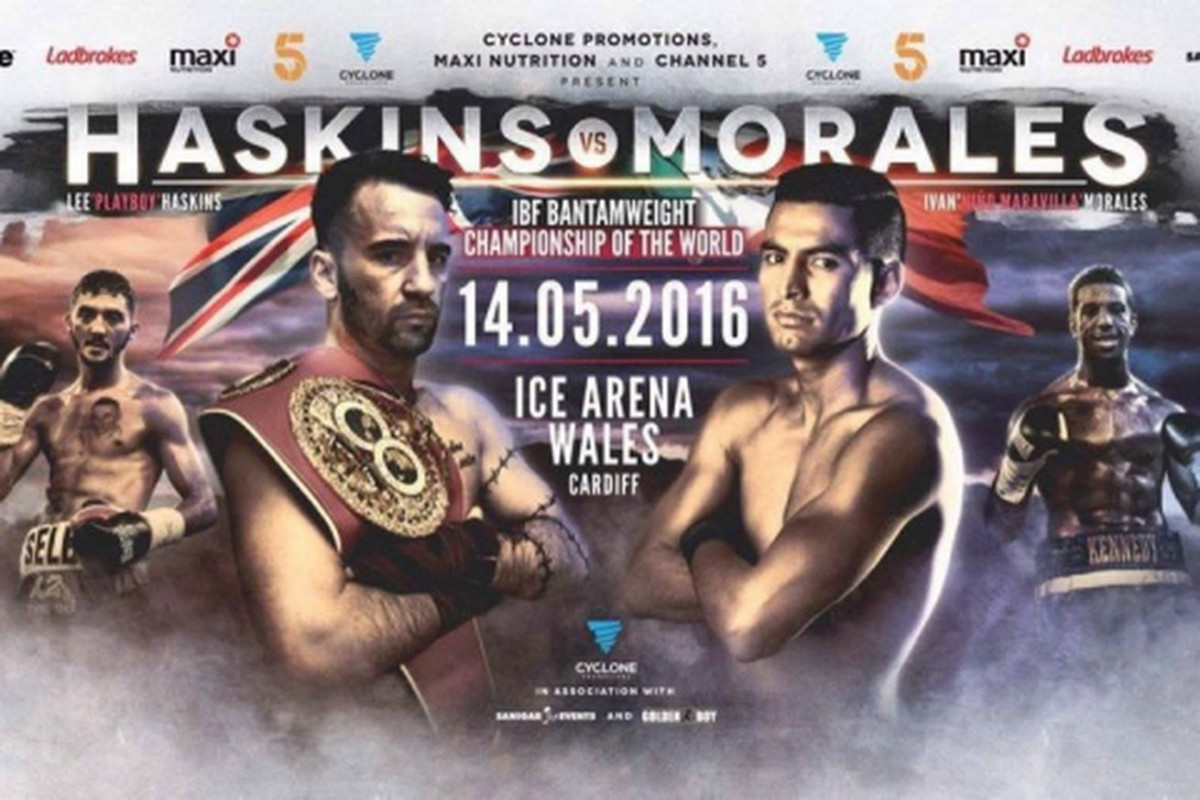 “He could be as talented as his brothers, but I want to put on a great show and stop the guy.” – Haskins.

Haskins, 32, claimed the belt in November last year when he went over to America to challenge the defending champion Randy Caballero on the undercard of the Canelo Alvarez vs Miguel Cotto fight in Las Vegas. Caballero came in over weight and the fight was called off and Haskins was awarded the belt without fighting

It was a cruel moment for the Bristol man, he would have wanted to win it in the ring and he fully deserved his position to do so and he was being tipped to pull off the victory. But that is how it turned out and Haskins returned to England the new champion. He wasn’t complaining and excepted it with open arms, why wouldn’t you!

As champion now he has the chance to go out and prove he is a worthy one. In reality the fight against Morales is his first world title fight and he will be out to show he is a worthy holder against a dangerous challenger.

Haskins (32-3, 13 KOs) has been a great servant to the British fight game for years and it seems as though he has been around forever. Twice a European champion, British belt holder at bantamweight and super-flyweight, he is also a former two weight Commonwealth champion. He has certainly played his dues and bided his time throughout a 13-year career to get to his current status and he will not want to let go of it, in this first fight as champion.

His 24-year old southpaw challenger Morales, younger brother of Mexican fight legend Erik Morales, the first Mexican in boxing history to win world titles at four different weights, and Diego Morales, a former WBO super-flyweight champion, has built up a decent record of 29-1, 17KOs. – Most of his fights have taken place in Mexico.

He stands tall works behind his jab but has a tendency to throw surprise wide hooks and left leads. He is an upright type boxers who likes to fight on the front foot and apply steady pressure to his opponent.

Morales will enter the Cardiff Arena knowing he can make history by becoming the first Mexican family to produce three world champion brothers and only the second ever. Only the Kameda brothers of Japan, Koki, Daiki and Komoki, have won world championships, though they held theirs simultaneously.

Fighting to make history to complete the hatrick for the fighting siblings, will give Morales an added incentive in his first world title shot and that adds another tick in the danger box for the Brit. But Haskins has no worries and is predicting his challenger won’t see the final bell.

Speaking about his opponent Haskins said: “He was very tough and had only been beaten once before, and that was by the guy who is now the WBC champion (Shinsuke Yamanaka).

“Just because his brothers can box doesn’t mean he can,” added Haskins.

“His record shows that he’s a good fighter, so I’m guessing he can whack a bit. But I haven’t watched him, I’ve left that to my trainers.

“He could be as talented as his brothers, but I want to put on a great show and stop the guy.”

Morales too predicted a knockout win, when he eluded to the fact the fight is in Haskins back yard and if the fight is close, he would expect the champion and home fighter to get the nod, he doesn’t want to let it get to that point and feels he has to finish the fight early.

“I know I have to win, so I want to win by knockout to take it out of the hands of the judges,” said Morales

“But I’m very confident that the judges will do their part and do the job well, just like I’m going to go in the ring and take care of my job and do it well.”

“I watched a lot of his fights and he likes to throw a lot of wide-open punches over the top. I think it’s going to be an entertaining fight to those who watch it because I’m going to go out and pressure him. And that will make it entertaining. But it will end by knockout, we will win by knockout.” added the Mexican.

Haskins will use his orthodox skills and moves and you can bet Morales hasn’t fought anyone like him before. It should be an interesting clash of styles and could either make for a great fight, or a messy one, lets hope for the prior. Haskins is underrated, he is possibly one of the most naturally gifted boxers we have produced, very unique and obviously highly influenced by his boxing hero Prince Naseem Hamed and it is about time he had his time to shine on the world stage.

Haskins has experience on Morales who hasn’t fought anyone of note and over the course of the fight this could tell.

Expect Haskins to take a a points decision in front of his home fans.

VIDEO: GASKINS TALKS ABOUT HIS FIGHT WITH MORALES

Standout amateur Selby, younger brother of IBF world featherweight champion Lee, only made his pro debut seven months ago and if he claims the Lonsdale belt it will be a record, the fewest fights a Welshman has taken to win it and the shortest duration of time.

Leicestershire’s Norman (11-1-1, 2KOs) came in heavy at yesterdays weigh-in, but returned 45 minutes later to just make the 8st limit after being forced to strip naked to do it. This should be a very good scrap between two very talented boxers.

Also on the card in Cardiff.

You can watch tonights boxing on Spike (Freeview, BT TV, Talk Talk channel 31; FREESAT channel 141; Sky channel 160) which will feature the undercard, before The Haskins v Morales fight will be screened live and exclusively on Channel 5 in the UK.