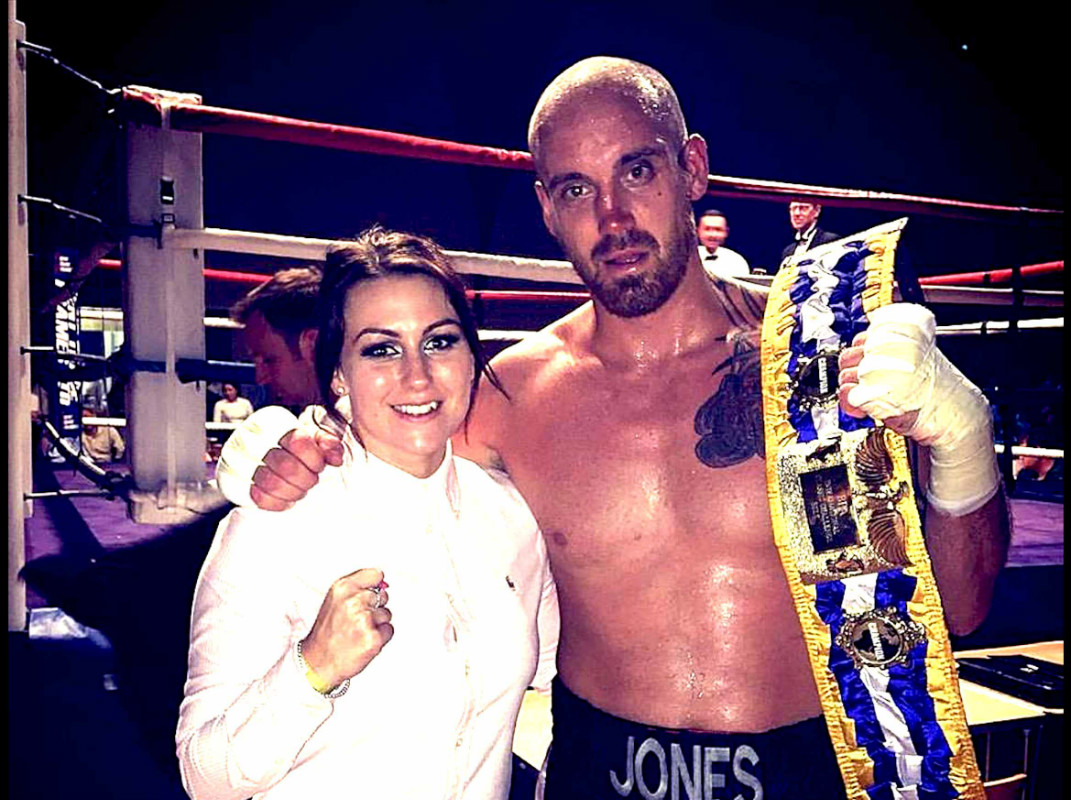 Popular Sheppy heavyweight Dave Jones marched on unbeaten with his seventh straight win in Maidstone on Saturday (June 4th) whilst adding the International Challenge belt in the process.

The seven-fight card, titled ‘Destruction’, was the fourth event Kent-based promotional outfit – JE Promotions have staged in the area and the first time in 16 years for a professional boxing show to be held at Mote Park in Maidstone.

Co-headlining the packed show, the 34-year-old unbeaten heavyweight from Queenborough moved up 7-0 on his record with a convincing 78-75 points win over the 39-year-old Czechoslovakian Jiri Svacina (12-20).

Jones began the eight-round contest exacting caution and patience, clearly conserving energy, well aware of the rounds ahead of him.

The home fighter used his jab to good effect with decent head movement adopting an educated range, all the while urged by his corner not to throw the big ones too soon.

Svacina recently shared the ring with the former British cruiserweight champion Jon-Lewis Dickinson and his vast experience was evident as he persistently moved away from danger, proving difficult to pin down as Jones kept trying to close the distance between them.

The middle rounds saw low blows down the Czech twice, prompting referee Kieran McCann to issue cautions to Jones, who continued to pummel the body of his counterpart and piled on the pressure.

Jones displayed a great work rate that had his counterpart in trouble a few times midway through the International contest.

In round six, Jones landed a great right hand over the top when cornering Svacina, who appeared to be tiring, as his hands dropped down low, holding on continuously.

The penultimate round saw Jones chasing his opponent around the ring, outworking him but not managing to land anything lethal enough to force the stoppage.

The final round saw yet another low blow go in from Jones causing Svacina to complain once again, turning his back. Jones pressed on regardless when the referee waved the fight on.

Svacina fell through the ropes on two separate occasions to a chorus of boos from the crowd and a point deduction from the referee.

Jones took the points decision to win the International Challenge heavyweight belt – the first honours to adorn his waist as a professional.

Post-fight, Jones admitted to the opponent being hard work and slippery.

The co-headlining fight saw Chatham’s Grant Dennis (6-0) come back from a second round knockdown to triumph over Jan Balog (10-29-1) with scores of 78-75 to land the International Challenge middleweight belt to add to his British version that he won against Wayne Reed in November last year.

From Hayes, Middlesex, sharp super-lightweight Elvis Makoda (2-1-2) defeated Billy Piper (2-2) 40-36 on points in the opening fight of the night

Leysdown’s Louis Greene moved up to 4-0 on his record with an impressive display against opponent Jamie Quinn (2-27-2).

It was a clash of the southpaws for the evening’s third contest as Chatham’s Charlie Shane (2-0) doubled his win tally in a tough fight against the experienced Liam Griffiths (4-63-1) with a 40-36 verdict on the scorecard.

Maidstone lightweight Chris Matthews (4-0) marched on unbeaten but had it hard against the unrelenting Harvey Hemsley (3-25-1) from Gloucestershire, the decision rightfully scored at 39-37 to the home fighter.

Orpington’s Martin Hillman (7-2) had a slippery customer in Tamas Laska (8-8-1), who came into the six-round contest with a winning record. Referee Kieran McCann judged the bout at 59-57 to Hillman to secure his fourth straight win in a row.

Post-event, promoter Joe Elfidh commented on the successful show, “We’ll be back in Maidstone again in September-October time.

“I’ll also be looking at getting Dave Jones and Oli Edwards out in Sheerness. I’ll be meeting with the BBBofC to get the venue approved shortly.”

For tickets to the next show, visit www.facebook.com/JEsportsnetwork/ or call 07883 943994