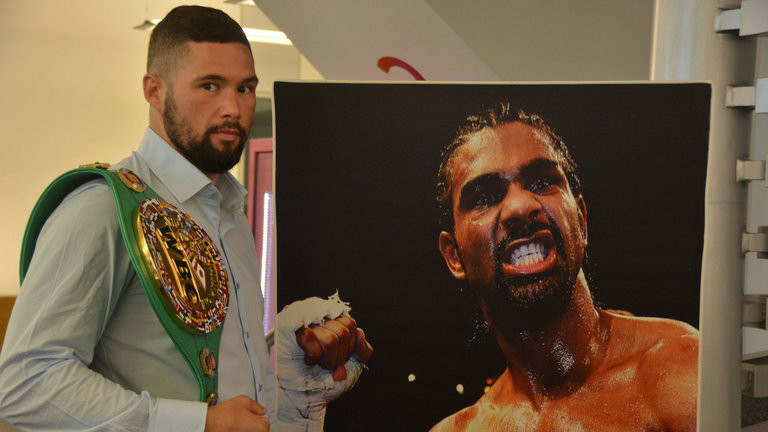 ‘I Could Knock Haye out, but he could knock me out, let’s get it on!’

Tony ‘Bomber’ Bellew revealed that talks have started between him and David ‘Haymaker‘ Haye, as they plan to face-off with each other in a potential blockbuster catchweight contest later this year. – Bellew really really wants to fight Haye and has been attacking him verbally, his recent cuss towards Haye, was to call him the ‘Haye-faker.’

Bellew became WBC world cruiserweight champion last weekend, scoring a devastating 3rd round KO over African Ilunga Makabu at his beloved Goodison Park football ground and afterwards called-out the former cruiserweight and heavyweight world champion to face him next, labelling Haye, ‘the Bermondsey bitch – and it got a response!

In his post fight interview Bellew (27-2-1, 17KOs) called Haye out, and also mocked him for fighting “clowns” in his recent comeback and went on to provoked the Londoner to get in the ring with him.

It seems like Bellew’s declaration has been welcomed by Haye (28-2, 26KOs) who recently made a comeback after three and a half years out of the ring. Haye responded to Bellew’s challenge by posting an Instagram video telling the Liverpudlian he will be happy “smash him to bits” after his next fight against American heavyweight Shannon Briggs.

“We are in talks. The two of us are speaking at the moment and we’ll see where it goes but I want to fight the ‘Haye-faker!’

“I’d say Hayemaker but it’s ‘Haye-faker’ because he’s pulled out of that many fights over the last few years. He ran scared – absolutely petrified from Tyson Fury – not once, but twice.” Bellew told Sky Sports News HQ.

“He pulls out of that many fights and he then actually goes on to fight clowns to be honest. Mark De Mori and the other guy Lurch (Arnold Gjergjaj) – it was just ridiculous the last two opponents he’s had.

“He wouldn’t use them as sparring partners so I’m happy to fight ‘Haye-faker’ any time, any place, it doesn’t really matter to me.

“I was over 15st when I got in the ring with Ilunga Mukabu so there’s no issue there. Believe you me when I say, if I hit David Haye with the same left hook I hit Ilunga Mukabu with, he will go to sleep exactly the same way.”

‘Come And Fight Me Haye’

‘I Could Knock Haye Out’