Mason Smith: “I’m all about entertainment… I love a tear-up.” 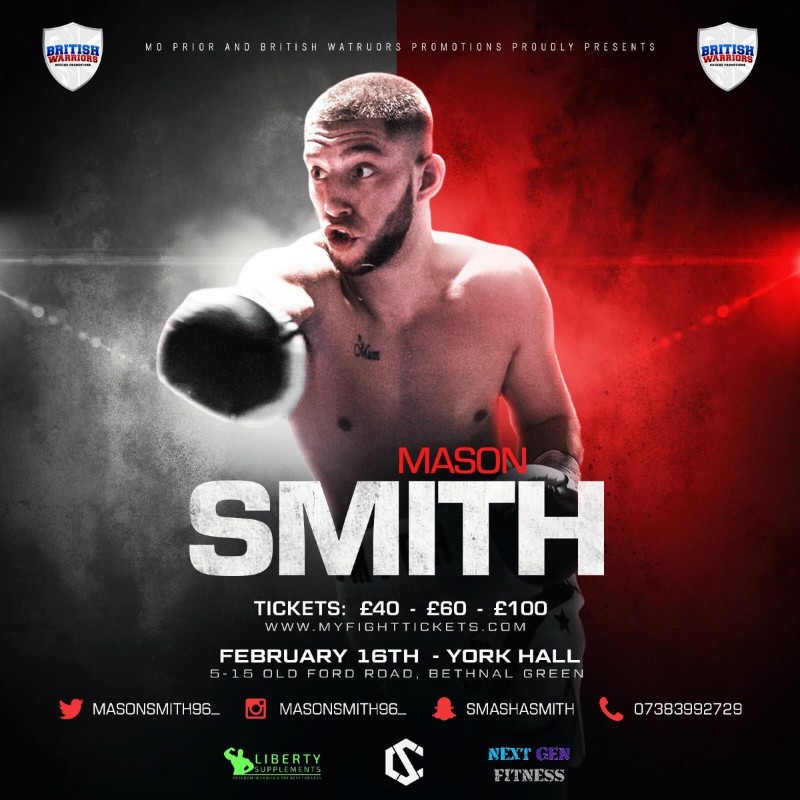 I expect nothing less than a world title. I would love to make the top 10 p4p in the world.

Mason Smith should have been back in action in December, but an injury in sparring put paid to what would have been his third outing as a professional. Unbeaten in his first two contests, since turning over in September, he eagerly awaits what should prove to be a highly active 2019 for the London based super lightweight.

Due back in the ring on 16th February on the York Hall British Warriors promotion -featuring Jez Smith and Samuel Antwi’s southern Area title clash- he will face off to Mitcham’s Lee Williams. If the 22 year-old has his way this will be the first of many dates in his 2019 diary. “I want another seven fights this year,” he tells British Boxers.

“I want to be at least 10-0 by the end of the year. I have always liked to be active. As an amateur I was fighting near enough every weekend, and as a junior I fought twice in a day three times at championships, so it isn’t a problem.

I want nothing less than a southern area title this year. Then hopefully in 2020 I can move on to the English or British title,“ he says with assured confidence.

The boxing bug hit Smith from a young age and he spins what proves to be a familiar narrative. “In junior school I used to get into a bit of trouble and stuff. My Dad, who had boxed for the Army, sent me off to the gym and I just loved it immediately. From that minute on I didn’t want to do anything else.”

Smith proved to be a fast learner and his ability to match natural talent with a keen and dedicated work ethic, saw him carve out an impressive career, first as a junior and them among the seniors.

“I had my first fight aged 11 and competed in every ABA competition. They never put me in as a novice, it was always straight through into the full ABA’s,” he said.

“I reached the finals as a junior in 2013, won the Box Cup in 2015, and boxed as a senior for England. In my first season I got to the London final and the year after I fell short, losing to Danny Wright [a potential future matchup for Smith] and from there I got a trial for the GB squad, and three assessments later I was in.”

Despite an amateur career that contained in excess of 100 contests there was regrettably to be no happy ending. Devoid of bitterness, but still confused by his ejection, Smith discusses his early release from the nation’s elite squad in more detail, “They said I wasn’t learning fast enough,” he discloses.

“But I was only there for three days every two weeks, which obviously didn’t make it easy. I don’t think they really liked my style. I guess I will never really know the full reason to be honest.”

But rather than seeing this as the end of the road, he positively repositioned it in his thinking as an opportunity to hit the ground early in the paid ranks. Signing with Mo Prior’s British Warriors stable; he made his pro debut just a week after his 22nd birthday at the iconic York Hall.

In the other corner was the rugged and awkward Slovakian arch-journeyman Rudolf Durica. The man known as ‘Soldier Boy’ presented a different and perhaps interesting challenge to an opponent that had been used to sharing the ring with elite level amateurs. “He had such an awkward style and was so negative,” says Smith.

But it was something that he was readily able to adapt to: “You take it as it comes and I got used to it quite early and controlled the fight. It’s all part of the learning game and I outboxed him throughout. It’s hard trying to stop someone that’s always holding and doesn’t come to fight. I hurt him in the 1st round and made him stumble, but these guys know how to survive and stay in there.”

Smith has a close and dedicated team behind him at London’s Finchley ABC. Not least his Dad who had been with him for the long-haul, but also the familiar faces of Sean Murphy and Gary Foley. A club and names that are inextricably linked to the journey of world heavyweight champion Anthony Joshua.

“My whole team is Finchley,” he says. “It’s my second home and I have been there since I was 10 years-old,” a fact that is recounted with obvious pride.

It is Finchley ABC old boy Anthony Joshua that Smith can credit with his ring name of “Smasher.” With a smile, he recounts the tale:

“I was boxing in Las Vegas back in 2010. We all got a chance to pick ourselves a little nickname and I was going to choose ‘Pretty Boy’, but AJ turned around and said ‘Why are you choosing that? You want to sound scary and mean.’ So, he picked ‘Smasher’ for me instead!

“It’s a good nickname. I can box and I can fight on the back foot and front. I can have a tear-up and fight in close, so I will always bring entertainment to the table. I just love fighting.”

It is that notion of “entertainment” that Smith comes back to several times in our conversation. You get the feeling that he is aware that sometimes being “good” is not enough in today’s ultra-competitive and crowded market place. That you need that extra something that separates the able practitioner from the A-list superstar.

His understanding of this key fundamental has ensured that he is sufficiently protected against the biggest enemy to all young prospects: the ability to put bums on seats and sell tickets. This is often the most significant barrier to preventing prospects from getting the regular ring time and fast-track progress that they crave.

“Sales are ok. I can do 70 tickets minimum every time. So, long as I can get that covered, then it’s all good. It’s not really about the money at this stage, it’s about building myself up and developing, so I can get on some of the big promotions.”

Smith spends his days working for BT installing and repairing telephone lines. A job that takes him “here, there and everywhere,” but is keen to point out that: “It isn’t forever. Boxing will be my job soon.”

The average day, for Smith, begins at 5:30am with an early morning run before starting work at 8am. When he knocks off at 4pm he heads straight to the gym, before calling it a day at around 8 o’clock in the evening. A professional boxers life is not for the uncommitted and especially so at this small hall end of the sport, where instant reward and gratification in the way of substantial purses is almost permanently absent.

But for Mason Smith it is all about the pursuit of his dream. Everything else can wait and be cheerfully suppressed until he has delivered in full on what he deems to be the sum of his talents. He jokes that this might make him seem “boring” to others that don’t share the same single-minded dedication. “You don’t have much of a social life,” he concedes.

“I am always in bed early. But when your career is finished you can have the party life. But you’re only young once and only have this opportunity once. You have to make the most of it and have the right mind-set. People can say it’s boring, but it’s all part of getting there.”

And where is “there?”

“All the way to the moon, because even if I fail I will still be a star,” he jokes. Before adding: “I expect nothing less than a world title. I would love to make the top 10 p4p in the world.” When he says this, he doesn’t just mean tomorrow, but of all-time.