10 classic fights that took place in a British Boxing Ring 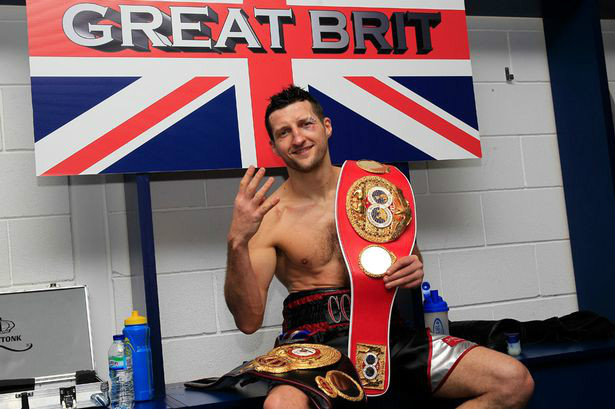 As the lockdown in Britain continues and the absence of live sport leaves fight fans searching for alternative ways to get their boxing fix, we have trawled the archives for 10 classics that took place on British soil.

It was February 17th 2007 when England’s Graham Earl took on Australian warrior Michael Katsidis at Wembley Arena for an interim version of the WBO title.

Earl was known as a fighter who would mix it up, Katsidis only knew top gear and a great fight was in prospect in the UK capital. What materialised was one of the best scraps seen in a British ring.

Earl was down twice in the first round, in round two he was down once and Katsidis was given a standing eight-count. Referee Mickey Vann ignored a towel thrown from Earl’s corner during the second round, as under BBBofC rules there is no provision for the corner stopping the bout during a round.

Almost immediately after the towel was thrown in, Earl stunned Katsidis, forcing the standing eight-count. During the fourth round, Earl developed a cut on his left eye, and his corner stopped the bout in between rounds five and six allowing everyone to catch their breath!

The fight wasn’t only an affirmation of the heart and toughness of both fighters, but also the exemplary judgement of one of Britain’s most decorated officials, Mickey Vann. His decision to ignore the towel thrown in by Earl’s corner was both brave and justified, as the Luton fighter experienced a resurgence and almost won the contest moments later.

It took one of the best technical performances to stop the marauding ‘Dark Destroyer’ who was intent on inflicting serious damage on his fellow Londoner, Michael Watson.

The classic British meeting between Benn and Watson for the Commonwealth Middleweight title took place in a purpose-built circus tent at Finsbury Park, London.

It was a Sunday evening on 21st May 1989 and will be remembered as clear evidence of how a good boxer can always beat a good fighter.

The unbeaten Benn, went in with a perfect at 22-0 with all 22 wins coming inside the distance, many in the first few rounds. Watson, was 21-1-1, 17 early. Watson had lost to James Cook and had a draw against Israel Cole, but he was a great technical boxer and was convinced he had Benn’s number.

Benn came out firing like expected and put Watson under immense pressure looking to make him his 23rd victim but this time his opponent wasn’t going away easily.

The peek-a-boo style performance from Watson is a lesson for any boxer facing a big hitter and that night his defensive work not only eventually seen him topple a punched out Benn, but arguably a lesson in defeat that turned Benn into a better boxer who went on to do great things.

Fresh off an impressive battle with Erik Morales, In jin Chi represented one of the biggest tests of Michael Brodie’s career.

Over a 12 round war at Manchester Arena, the judges couldn’t separate Brodie and Chi as the pair left it all in the ring in a bid to claim the vacant WBC World Title.

Having been dropped in just the second session, Brodie showcased pure grit to gain a foothold in the fight and halt the relentless attacks of Chi.

The Manchester fighter, who became synonymous with spectacular fights, rallied back and fired shots to the body and pummelling his South Korean counterpart.

Despite coming up agonisingly short in a draw, Brodie affirmed his status as a world-class fighter over 12 enthralling rounds in Manchester.

Having recently notched up two victories over Roberto Duran, unique story of Vinny Pazienza saw him head to Wembley Arena as he took on the slick Herol Graham.

Graham displayed discipline and commitment to his approach, dictating the bout with his long lead hand as Pazienza ploughed forward and sought to draw him into a fight.

Arguably one of Britain’s most underrated boxers, Graham displayed his superior skill on the night, frustrating the tireless American who failed to solve the southpaw puzzle of his 38-year-old opponent.

Duke McKenzie went onto be one of Britain’s best fighters of the modern era, however at the time, many in the sport expected him to come up short when he challenged the more experienced Charlie Magri for the European Title at Wembley Arena.

Displaying both his skill and maturity, McKenzie was forced to weather the storm of Magri, who set a blistering early pace.

McKenzie calmly asserted his dominance on the fight, utilising his fast and effective jab to halt the flow of Magri.

It was in the fifth round when McKenzie confirmed the British and European titles were his, as he planted his feet and thudded a couple of powerful shots at Magri, causing the Londoner’s resistance to wilt.

The unorthodox and relentless nature of Green’s attacks left Palomino flustered in the early stages, however having stood up to the initial assault, the gutsy Mexican stormed back into the fight.

Green, who clearly enjoyed a scrap, courageously engaged with his powerful opponent as the two put on a spectacular battle in London.

As the fight grew on, the crispness of Palomino’s work increased and in spite of failing to clearly win any of the opening five rounds, he began to take the ascendancy.

Although the Englishman had a clear lead on the cards, it was in round ten that the tables were turned, when significant swelling to the eye of Green enthused the efforts of Palomino.

He pushed forward and in round 11, when he unleashed a vicious left hook on Green the bout was brought to an abrupt and brutal end.

The Odeon Cinema in Hammersmith was the unlikely venue for the final chapter in the enthralling trilogy between Dennis Andries and Jeff Harding.

Harding entered enemy territory as he sought to take back his belt from Andries – who defeated him for the WBC Light-Heavyweight title in Harding’s home country Australia a little over a year earlier.

The Australia and England rivalry fueled an electric atmosphere as the pair left it all in the ring over 12 thrilling rounds in London.

In an unrelenting battle of wills, both fighters pushed each other to their limits as Harding managed to turn the tide of Andries’ early dominance and edge towards the narrowest of victories.

The fight epitomised what it means to be a boxer – as two athletes at the peak of fitness displayed grit, desire and fortitude in abundance as they attempted to get their hand raised and claim the coveted WBC belt.

Embodying their toughness, both men wore the wounds of battle and endured immense punishment, but neither succumbed to hitting the canvas, as one of the most underrated trilogies reached a dramatic conclusion.

Froch fires on all cylinders against Bute

Undefeated and feared, when longtime IBF World Champion Lucian Bute came to Nottingham from Canada, many anticipated he would have too much for Britain’s Carl Froch.

Having been dominated by Andre Ward in his last bout, ‘The Cobra’ returned to his best and wasn’t going to be denied in his brutal beating of Bute.

The fate of the fight was secured in the third round when Froch unleashed a spiteful combination on Bute, who never really recovered and was stopped in the fifth.

The stakes were raised in Birmingham as local rivals Frankie Gavin and Sam Eggington fought out a ferocious local derby.

Although they were both from Birmingham, the pair’s route to the big stage was very different, Britain’s first-ever world amateur champion Gavin had struggled to fulfil his potential in the paid ranks.

In spite of blemishes on Eggington’s record, his decision to go on the road and embark on a tough apprenticeship was somewhat vindicated as he’d fought his way to the big show, in a fight the provided both him and Gavin the chance to excel their career to the next level.

In what was a turbulent battle that swayed both ways, ‘The Savage’ eventually overcame the odds and dispatched of Gavin in the eighth round.

Thanks for reading and watching the fights. For more of our videos, visit our YouTube Channel BBTV here: https://www.youtube.com/britishboxersuk