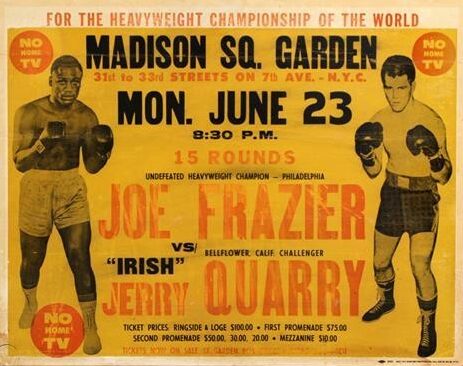 After Muhammad Ali was forced to abandon boxing due to his refusal to join the Vietnam war, the undisputed titles at heavyweight were up for grabs. The WBA set up an 8-man tournament for their title. Somewhat unpopular with the fighters, Joe Frazier felt hard done by, having been around the top spot for years.

Today the idea of a New York recognised championship seems like small fish, but back then, heavyweight boxing was an utterly American contest. Frazier’s NYSACC belt carried substantial authority.

Quarry, despite the loss to Ellis, was still one of the sharpest heavyweights in the world. At just 24 he owned a record of 31-2-4 (18 knockouts), he was known for his counter-punching savvy and tactical awareness.  His level of wins portrayed by the likes over Floyd Patterson, Thad Spencer and Mathis.

Frazier was understandably the favourite going into this bout but the air of superiority was dutifully cut down almost immediately by the quicksilver punching of Quarry.  The slick counter punching was thrown to one side as Quarry bamboozled the champion with rapid straight punches down the centre line .

Frazier often synchronized his bobbing and weaving at the waistline in tune with his opponents attack. It wasn’t unusual for him to fall behind early to gather this pattern. However, Quarry looked dangerous from the offset and fought unusually to his counter punching style. The second round caused further trouble to Frazier as his timing was spoilt with every punch he threw. Quarry was swarming the aggressor and found substantial success with his uppercut which swung like a coordinated pendulum onto Fraziers weaving chin. A thrilling exchange ensued as the two scraped at mid distance- Quarry predicting the champions timing with sheer accuracy.

The third round revealed signs of Frazier analysing this pattern in depth.  Frazier was able to take the jab away with a sharp right-hand counter that looped over the top of the straight punches from Quarry. Once rattled, Frazier then drove in punishing hooks and uppercuts to head of Quarry. A slicing hook gouged a deep cut to Quarry’s right eye in the fourth round which served to encourage the champions bloodlust. Frazier would target the damaged area with slicing left hooks and continued to attack the body with menace.

Quarry rumbled forth to war with smokin’ Joe on the inside, landing unsettling hooks himself. This upset the rhythm of Frazier’s attack, but Frazier’s defences were now all too attuned to what was coming. Frazier ravaged the body of Quarry, chipping away at his resolve through rounds 5 and 6. By the 7th round Quarry was a beaten mess and was now eating left hooks at almost every exchange, whilst Frazier seemed to rally further. The bout was stopped, and Quarry wept in disappointment. It has been a tough night for Frazier but he was able to adapt and win.

Quarry, despite excellent victories over Mac Foster and Ron Lyle, would never vie for the championship again.  The rematch with Frazier was less impressive with Frazier having a 5th round knockout win 5 years later. Gil Clancy, Quarry’s trainer, prepped him throughout his training camp to move to his left in order to move away from one of the best left hooks the squared circle has ever seen. Ever the stubborn warrior, Quarry elected to move to his right to show that he could take it. This was however a mistake as an exasperated Clancy tears his hair out in the corner, watching his man disassembled by the left hook of Smokin’ Joe Frazier.