Ring fight of the year 1972: Chris Finnegan challenges all time great Bob Foster for the world title at Wembley 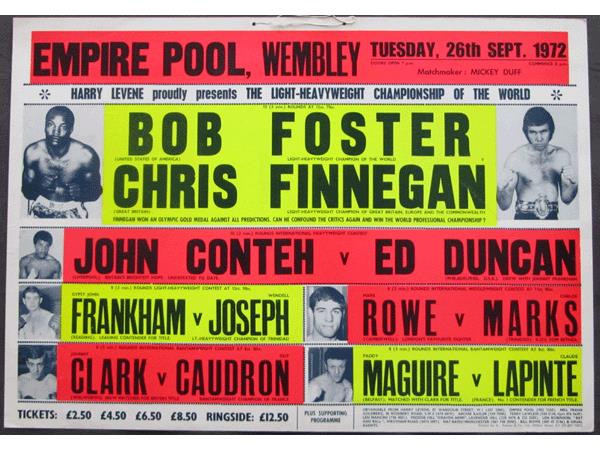 “Finnegan was the best light-heavyweight I fought!”

Chris Finnegan was a British/Irish fighter who fought throughout the late 60’s and mid 70’s. Finnegan won middleweight gold at the 1968 Olympics in Mexico City and turned professional almost immediately afterwards. His career had progressed solidly, winning the British and British Commonwealth Light Heavyweight title. This put him in prime position to fight for the WBC and WBA light heavyweight World titles that had been placed around Bob Fosters naval for 11 title defences before facing Finnegan.

Bob Foster is known as pound for pound one of the biggest punchers of all time and one of the greatest light heavyweights. Amassing 23 knockouts in 33 bouts, Foster went on to defeat the legendary Dick Tiger whom he had to fight for free to get his world titles.  With 17 more knockouts in 19 bouts with just one loss at heavyweight to the illustrious Joe Frazier, he accepted the challenge from a game Chris Finnegan. At light-heavyweight Foster was untouchable, barely losing a round with his slick movement and vicious head hunting. Not many at Wembley stadium were expecting the bout to go beyond the 4th round which was the mode for his bouts after defeating Dick Tiger.

The pattern is set from the start. Finnegan always in motion, doing circuits of the ring while Foster comes forward. Finnegan looks composed and confident despite the daunting figure in front of him.

Halfway through the third comes the first reminder of the danger. Finnegan slips inside and walks straight onto a jolting right hand. The punch shunts the movement of the Irish born fighter, zapping some of the success he had. Finnegan takes another flush pounding early in the fourth but this time he seems more adept at taking the punch, almost as if he has acclimated to the power. Finnegan responds by zipping across the champions frame to land fast cutting jabs and crosses, utterly dominating the rest of the round. The crowd have bubbled up in perplexity of the scene.

The best proof of Finnegan’s success however is Foster’s exasperation. He growls at Finnegan while they’re in a clinch. He fires wild row-Z haymakers in frustration and at the end of the sixth pays dearly for it from the Southpaw Finnegan who makes successive left cross leads that visibly hurt the champion. It was a true surprise to everyone at ringside the sort of feat the challenger was pulling off and it was Finnegan who looked the fresher, more relaxed fighter.

The seventh round quells some of this optimism as Foster lands a rocket launched punch right from the opening bell. Now it is Finnegan who looks somewhat dazed, but his elite footwork gets him out of trouble before Foster can capitalise. Finnegan goes on to have another superb round and attempts to put more spite in his own style as he fights closer.

Rounds eight and nine are a similar affair as Finnegan lands fast combination. But Foster has a more determined grit written on his face as he stalks the challenger, unaffected by what is coming back at him.

Just when it seems as if Finnegan may box his way to a victory, a jab followed by a big right puts him down in the 10th. The challenger is up quickly but he can no longer maintain the bouncing strength is his legs. He has no choice but to stand and fight- feet planted.

In contrast, Foster is suddenly buoyed by the knockdown and quickens his own pace. Foster is slipping, jiving, dancing around the challenger and landing hard welting shots.

Finnegan is tough and takes a wealth of abuse; more than would seem possible from one of the biggest pound for pound punchers of all time. He answers back with some hooks on the inside, but it is clear by round 12 he is on borrowed time.

Having offered so much, the end finally comes for Finnegan in the 14th with a jab and straight right combination again putting him down. He stares at the ground and makes no attempt to beat the count.

In later years when asked, Foster gave credit to Finnegan as one of his toughest ever opponents. “I didn’t have any problems with them light-heavyweights until I fought the guy from England, a southpaw. I jabbed him but had to go over his right hand, I couldn’t get the leverage to knock him out. I was building up points, winning the fight but I wanted the knockout, I didn’t knock him out till the 14th round. He was the toughest guy because he was a southpaw. I think he was the best light heavyweight I fought.”