Full Card Report: Lewis Ritson gets away with victory on a night of upsets in Peterborough 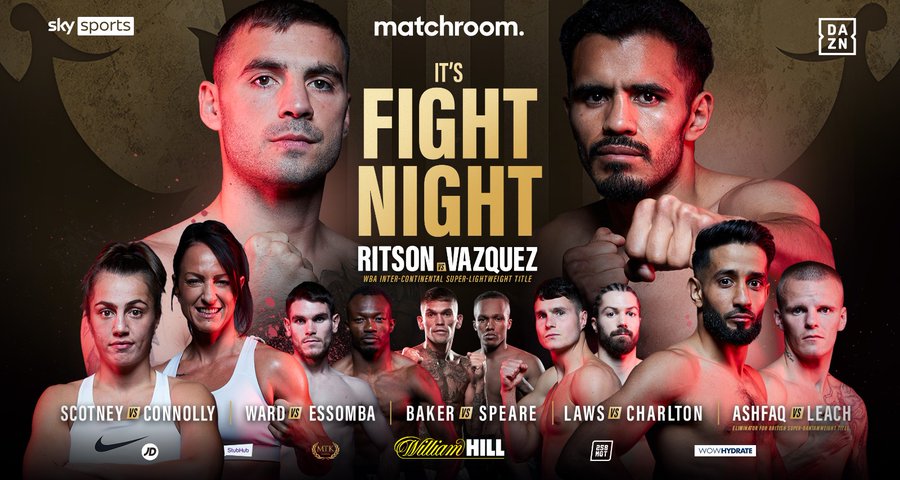 The rangy Mexican provided a tough foe for Ritson, who took the centre of the ring but struggled to assert his dominance on the contest.

Ritson had a hard time taming Vazquez in the opening half of the clash as the more experienced operator had success from the outside.

As the crafty Vazquez began to build a lead, Ritson’s frustration grew, as he continued to march forward in a bid to slow his opponent.

The success of Ritson increased, however, the wilt in Vazquez he was anticipating failed to come to fruition as the Mexican remained composed on his backfoot.

Ritson’s best shot in the tough contest was his jab, as he sought to achieve rewards for his pressure.

In what was sort of a surreal conclusion, the Ritson corner continued to assure their man that he was comfortably ahead on the cards, in spite of the general consensus seeing Vazquez as the victor.

As both returned to the middle of the ring for the announcement of the decision, both wore a frustrated look. Before Ritson was given a split decision verdict by scores of 113-116, 117-111 and 115-113.

In the first of two super-bantamweight battles, many felt Thomas Essomba was hard done by as he drew with the highly-touted Thomas Patrick Ward.

After a solid opening session from Ward, Essomba began to take a more aggressive approach and was rewarded by increased success.

Following a cagey start to the session, the success of Essomba continued in the fourth as he stunned Ward with a sizzling left hand from inside the pocket.

Ward settled into the bout and sought to use his hand speed to control the determined Essomba as neither fighter gave an inch.

Just prior to being nailed with a thudding hook, a gruesome cut opened on the eye of Ward as a result of an accidental head clash.

As the cut worsened, the referee called a halt to the contest and the judges deemed it a draw with the scorecard reading 88-85 for Essomba, 88-84 for Ward and 86-86.

As anticipated by many, the fight got off to a relatively tentative opening as the former sparring partners looked to outwit one another.

In the first three rounds of the battle, there was little to split them however Leach’s movement began to frustrate Ashfaq, who struggled to find his rhythm.

Leach’s left hand proved a fruitful weapon in the opening rounds as he settled to the task of taming the slick former olympian well.

It was in the fourth session that the Salford man made his breakthrough, setting up Ashfaq for a brutal short shot, dropping him to the canvas and very nearly forcing the stoppage.

Leach’s movement continued to bewilder Ashfaq, who was being forced to spoil an uncharacteristic amount.

Just as Ashfaq was growing into the fight and beginning to have success, Leach once again called on his sharp left hand and sent the undefeated Yorkshireman to the canvas for the second time.

Newcastle favourite Joe Laws suffered his first career defeat at the hands of Rylan Charlton, who powered to a stoppage victory.

Charlton forced Laws to retreat in the opening round as he zapped his energy with a powerful body shot, as Laws edged back in the contest a big left from the Norwich man saw Laws hit the deck.

The energetic Geordie started the second wildly and was once again punished with a left hook.

It was in the third, that the commanding Charlton seized the opportunity landing a right hand high on the head of Laws, who crumbled to the canvas and failed to truly recover.

The heavy-handed Charlton followed up in a cynical fashion to extend his unbeaten run to seven and dispatch of Laws and record his biggest victory to date.

In a fight that only came to fruition because of a tweet by Tony Bellew, Kane Baker earnt a deserved victory over the previously undefeated Meshech Speare in an exciting battle.

Both wasted little time in getting to work, engaging in lively exchanges from the opening bell. Baker was typically aggressive, setting up powerful work to the head and body with a strong jab.

Speare found a regular home for his strong lead hand, however, Baker dictating the pace of the bout against Spear, who had never previously been beyond four rounds.

The conclusion of the fourth saw the drama intensify, as Baker’s bodywork really began to take its toll before a Speare rallied back and seemed to rock his more experienced opponent.

In another cracking round, Baker edged much of the penultimate session landing strong shots to the head and body, however once again being rocked by Speare just before the bell.

Credit to both, they closed an engaging contest in a fitting fashion leaving it all in the ring and landing strong shots in the final round.

After getting the verdict by a score of 59-56, an ‘ecstatic’ Baker expressed his emotion and added that he is excited to get out on a big show again.

Making her long-awaited professional debut, Ellie Scotney opened the show with a shut out points victory over Bec Connolly.

The likeable Londoner took to the pro game like a duck to water – displaying sharp hands and a solid selection of shots to head and body.

Heading back to her corner at the culmination of the third, Connolly admitted she was buzzed as Scotney planted her feet and powered home quick combinations, forcing her opponent to take a knee.

Further elevating an impressive outing, the debutant closed the contest from the southpaw stance, underlining just how much potential she has.

Connolly showed heart as she dug in and remained in the fight until the final bell against the impressive Scotney.