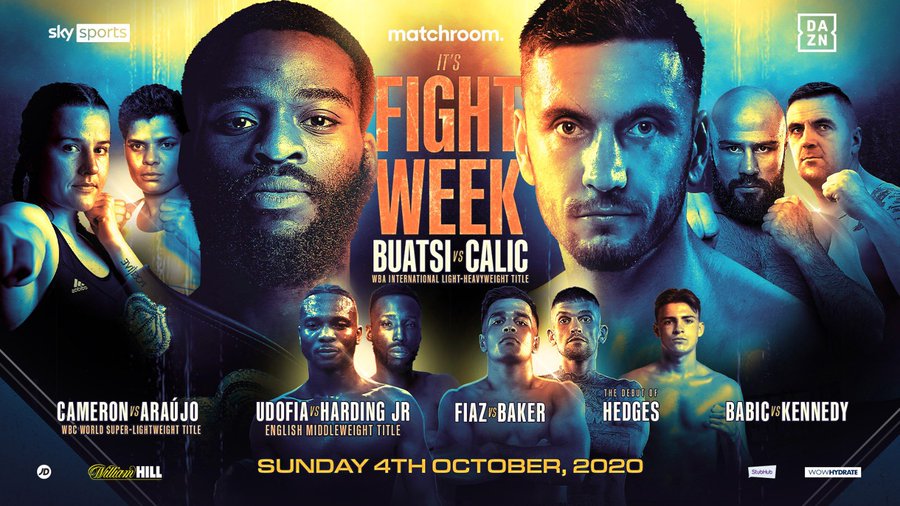 It comes as the promotion recently announced a large portion of their schedule for the rest of the conclusion of 2020, which includes the anticipated rematch between Dillian Whyte and Alexander Povetkin and their rescheduled Newcastle event.

The Croatian stands at 6’3 and used to weigh in at over 200 pounds on fight day,  he represents a firm test for Buatsi – who has not boxed in over a year and hopes to land a world title eliminator against Blake Caparello on the Joshua Pulev card should he overcome Callic on Sunday.

In the Co-feature, new-Matchroom signing Chantelle Cameron lands her first world title shot at 140 pounds. She takes on a very tough contender in Brazilian Adriana Araújo who gave Katie Taylor a standing count in their amateur contest as well as defeating Natasha Jonas.

Cameron who has also had an amateur rivalry with Taylor hopes to set up a rematch of their 2011 contest by securing the vacant WBC title recently vacated by Undisputed Welterweight Champion Jessica McCaskill. Cameron has repeatedly stated her intentions of facing the Irish star and hopes that a promotional contract with Matchroom will go a long way in making her dream fight.

After his Impressive beatdown of Shawndell Winters in the fight camp finale, unbeaten Croatian Heavyweight prospect Alen Babic looks to extend his record in another difficult test against Ireland’s Niall Kennedy over eight rounds. Kennedy, coming off a stoppage loss, hopes to prove he belongs at a higher level and blames his upset loss on a back injury and wrist complaint. Babic who looked explosive in his destruction of the tough American will have ambitions of growing his reputation as one of the heavyweight division’s most feared prospects.

Aqib Fiaz takes on Kane Baker in a contest originally scheduled for Week 3 of Fight Camp but postponed due to Fiaz falling ill.

Fiaz will hope to silence the doubters over his willpower and skill level in what has become a hotly anticipated grudge match with fans demanding the rescheduling of this fight.

In the show opener, Dillian Whyte managed contender John Harding Jr gets a second shot at an English title after his stoppage defeat to Jack Cullen last year.

He takes on the Goodwin-managed champion Linus Udofia, who has seven stoppages in his 15 wins so far and has been perfect in the paid ranks. Udofia will be looking to impress the Sky Sports audience with a win over Harding, which could set up a battle with Commonwealth Middleweight Champion Felix Cash as well as a potential vacant British title fight against the winner of the rematch between Denzel Bentley and Mark Heffron.