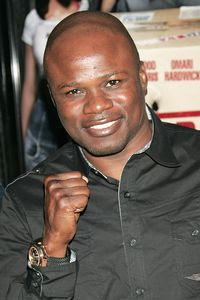 Another boxer Dead! This time former Three-Time WBC Champion Vernon Forrest 38, on the back of ring great Arturo Gatti and Alexis Arguello to name but two. It has been a upsetting month for the boxing world, and now this.

New reports were coming out of Atlanta that Forrest actually chased his killers, with his own gun, after they tried to car jack his Jaguar at gun point.

A Police statement from the scene says there were two men involved in the killing. “He was shot seven or eight times as he chased at least two men who had tried to steal his Jaguar as he put air in his tires at an Atlanta gas station”, Lt. Keith Meadows said.

Police also said that Forrest, who was carrying a gun as well, chased down the two men who supposedly had carjacked him, gunfire erupted, and Forrest was shot several times and fatally through the head.

Forrest had a gun and confronted the men, police said.

“The victim and suspect became involved in a brief foot chase,” Meadows said. “At some point, gunfire was exchanged between the two of them. The victim was shot at least once in the head.”

Forrest was fatally wounded by two semi-automatic weapons, according to police.

“At this point we have a general description of at least two black males driving a red Monte Carlo,” Meadows said, according to the report.

Police said the suspects likely didn’t know Forrest, whose girlfriend’s young son was in the car when he was shot.