Britain’s new Heavyweight champion of the world David Haye (23-1, 21 KO’s) makes the first defense of his title on Saturday night, when he takes on American challenger and the former two time world champion John Ruiz (44-8-1, 30 KO’s) at the Manchester M.E.N Arena.
Here are the last 5 fights of each boxer including video
David Hayes last 5 Fights 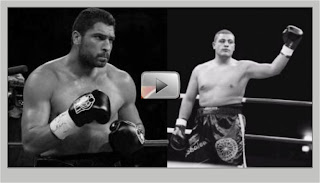 The Quiet Man of boxing John Ruiz arrived in Manchester this week, with only his corner team, choosing to leave his family back in the states, set David Haye off believing that he has done that because he knows what’s coming.
“I wouldn’t bring my family either, if I knew I was going to get decapitated!” he told Sky Sports News.
“He’s gonna get knocked out and maybe subconsciously he knows that. That’s why he told his family to stay at home.
“I’m bred to do this, I’m a fighter through and through. I know what it’s like to be in hard fights, I know what it’s like to dig dip and I’m expecting to have to dig deep.
“I’m mentally prepared for a tough, gruelling fight – but a fight he will end up unconscious in.”
“I wanted to do my last hard training session in London, in my own gym,” he said. “It’s fine, it’s only when I really get into the changing rooms that I really switch on.
“A lot of fighters switch on too early; you see them shadow boxing a week before their fight and they’re burning up too much energy that they need in the fight. When I’m in the ring, that’s when I’m 100 per cent, all guns blazing.
“It’s all about looking, feeling and being as perfect as possible on the night of the fight. There’s no need being on peak performance three weeks out – it means nothing.
“Everything myself and Adam (Booth) do is to peak when we walk into that ring. When I climb through them ropes I’m in the best physical condition I can be in and that’s all that matters.
“I’m expecting a real tough night; it’s going to be exciting but I am going to knock him out.”
Former two time WBA heavyweight champion Ruiz has been working hard in his Las Vegas training camp since mid-January in preparation for this opportunity against Haye at the Manchester MEN Arena.
WBA No. 1 contender Ruiz, the first and only heavyweight World Champion of Latino heritage, will be fighting in his 12th world title fight, while looking to become only the third heavyweight in history to win the title 3 times.
In 2001, Ruiz dropped defending WBA champ Evander Holyfield en-route to a title win by 12-round decision in his history-making performance.
Ruiz captured the WBA crown for the second time on Dec. 13, 2003, easily winning a 12-round decision against former World Champion Hasim Rahman for the WBA Interim title, which soon became the outright championship.
During this training camp, Ruiz has been sparring with fighters that resemble the quick, hard-punching Haye. “Everything has been great throughout training camp,” Ruiz said.
“This camp will be the longest I’ve ever trained for a fight. I took a little time-off after my last fight (Nov. 7 vs. Adnan Serin – WTKO7 – in Germany), started running and exercising right after that, and then I went right back into the gym. I’m going to be ready April 3rd for Haye.”
David Haye on Soccer AM talking about the bout with John Ruiz