Haye has a proposal for Bellew 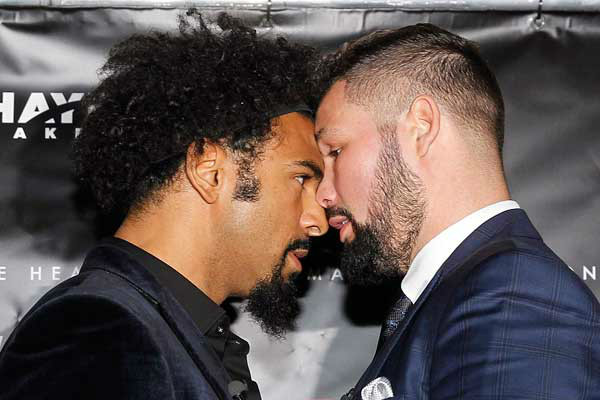 David Haye says he wants a rematch with Tony Bellew and believes their new found rivalry can match some of the best boxing grudge matches in history and maybe they can go on to have a trilogy.

Scouser Bellew defeated Haye last Saturday night at the O2, after the Londoner’s corner were forced to throw in the towel in the 11th round after a memorable night for so many reasons in the Capital. Haye had suffered a ruptured Achilles tendon in the 6th round and now faces months out of action while he recovers from surgery.

Many have called for Haye to call it quits considering the length of the rehabilitation process and the fact he is now 36 years-old, and it is being whispered that maybe his best days are behind him. Haye being the competitor he is has ruled out any such thought of bowing out and is still has determined as ever too become heavyweight champion of the world again.

Bellew, 34, is the current WBC world cruiserweight champion, but is unlikely to stay at that weight now. He has hinted already in the aftermath of the weekend brawl, that he may retire from the sport himself and go out on top. A rematch with Haye is just one option for Bellew after his largely unexpected victory with other decision to make. But Haye thinks Bellew being the fighting man he is, will be tempted by a return with him.

“I truly hope he doesn’t, but if he was to retire I’d carry on my path to become No 1 in the world. I’ll find a way to challenge for the heavyweight title.” Haye told Sky Sports News HQ.

“Not often do you find your nemesis, the guy that in 50 years time people will look back and say ‘remember the Bellew-Haye days, what crazy fights they were?

“The way people look at Micky Ward-Arturo Gatti, at Roberto Duran-Sugar Ray Leonard, at Joe Frazier-Muhammad Ali. They had such amazing fights, and maybe Tony Bellew would like some of that.”

“I’ve got a feeling after sharing a ring with him face-to-face, locking horns with him, that he’s a real fighting man.

“What we say in the lead-up to fights is one thing,” Haye said. “But once you go to war with someone, and in that life-and-death situation you can see this guy wants it as much as you, you have a different type of respect.

“I didn’t know him that well as a person. I had my preconceived ideas, but after sharing a ring with him he’s a true warrior like I am.

“I’m in the sport to compete with other warriors. He said if he was to win he’d give me a rematch. I thought it was laughable, but he found a way to win and hopefully he’s a man of his word.

“I’ll do the same. If the rematch happens and I beat him, I’ll give him a third fight.”