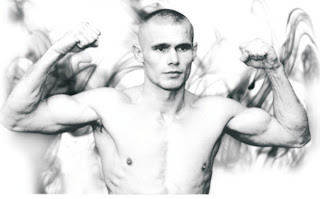 “I’ve been promised the Commonwealth fight now in July and I can’t wait.” Martin Murray
St Helens up and coming British star Martin Murray kept on track for his vacant Commonwealth title shot in July with an effective, no nonsense performance in Sheffield.
Prizefighter champion Murray now 19-0 – who is trained by Oliver Harrison in Salford, destroyed Lee Noble in his own back yard at the Ponds Forge Arena on Friday night.
Murray had been scheduled to fight tough Tanzanian fighter Francis Cheka, as reported last week on British boxers, but Cheka was denied entry to the UK following problems with his Visa.
Hatton promotions worked hard to find a replacement opponent in a short time frame, but just when it looked like a replacement was found it would fall through.
Noble was eventually matched with Murray 24 hours before the fight was due to take place, but unfortunately it was no longer for the Commonwealth title. Murray was clearly devastated by this, especially as he has been pushing hard for title opportunities, but he maintained his composure and focused on the task at hand.
Noble is a very under rated fighter, and as you would expect from any Ingle fighter, he can be awkward and difficult to look good against. He has recently taken many up and coming prospects the scheduled distance, most recently Billy Joe Saunders. Murray stressed that the important thing was that he wanted to prove to everyone that he deserved the title opportunities and that he was a class above Lee Noble.
Murray took his frustrations out on the capable substitute, forcing Noble’s corner to throw in the towel before the start of the fourth round, the usually durable journeyman struggling to breathe after Murray targeted his ribs from the outset.
Not surprisingly, promoter Ricky Hatton was delighted with Murray’s display, as he added a seventh stoppage success to his exciting pro record.
“As God is my judge, Martin’s next fight will be for the Commonwealth title” said Hatton.
“It’s frustrating that the title chance didn’t come this time but I had a job to do in there. I’ve been promised the Commonwealth fight now in July and I can’t wait.” added Murray.
Murray looks the real deal and it seems only a matter of time and good fortune in getting the fights he craves, before we could have another world champion in our British midst.
Keep tracks on Martin Murray at his website: www.martinmurrayboxing.co.uk
Other News on the undercard in Sheffield.
Manchester boxers Stephen Foster Jr and Andy Morris have targeted  British title fights before the end of the year.
Foster impresivley stopped Aleksander Vakhtangashvili and Morris made light work of Nugzar Margvelashvili at Sheffield’s Ponds Forge leisure centre.
For Foster it was his latest step on road back to the big time after defeat to Alex Arthur for the WBO interim super-featherweight title in 2007.
He has fought only four times since then – three of bouts coming in 2010 since being taken on by Ricky Hatton’s promotion company.
Morris, too, is desperate to get back in the hunt for British title success following his points defeat to super-featherweight champion, Gary Sykes in  March.
Also
Norfolk Parks’ John Fewkes dominated Billy Smith, but couldn’t find the finishing shot, winning easily on points.
Sheffield heavyweight Richard Towers dismissed ill-matched East European Ladislav Kovarik in one round.
And there were wins for Ross Burkinshaw, Lee Edwards, Kid Galahad and Sam Sheedy.

By Chris Maylett for British Boxers