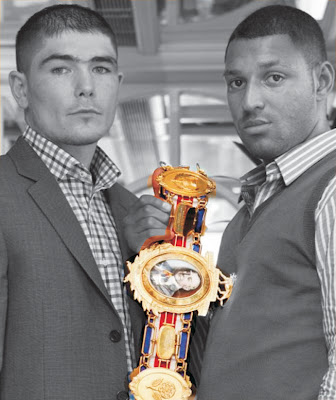 Whisper it! Michael Jennings and Kell Brook will attempt to fight each other for a 5th time, the four previous match-ups were postponed!

The anticipated British match-up of the two best welterweights in the country has been postponed on four separate occasions, but it has now been announced to take place as part of a Frank Warren Magnificent Seven show at Birmingham’s LG Arena on September 18.
Brook, 24 and highly rated, vacated the British title earlier this year but will compete for the belt once more – although he is yet to take on anyone as experienced as 32-year-old former WBU world champion Jennings.
“Fans will see a very special performance,” said Brook. “I can’t see this fight going the distance. I’ve got a lot to prove and I will do it against Jennings.

“I’ve been out of the ring for a while and I am frustrated, so I can’t wait to get in there and box again.”

But the ‘Lurcher’ British welterweight champion Jennings hit back by saying: “I’m glad the fight is finally on, and I know Kell will turn up this time.

“He’s got a lot to say for himself, but I’m just concentrating on getting this right for me.

“I’ve got a lot of experience and that will be key on the night.

“There is some talk about Pacquiao, but I might end up fighting for the vacant title, so who knows. All I can worry about is what happens against Kell on September 18.”

The winner of the bout will be in contention to fight for the WBO world title, which Jennings challenged for last February when he lost to Miguel Cotto at Madison Square Garden in New York.
The  title fight will now also double up as a eliminator for Manny Pacquiao’s WBO world title. although he is expected to fight Floyd Mayweather before the end of the year and then retire to take up a government post in his homeland the Philippines.