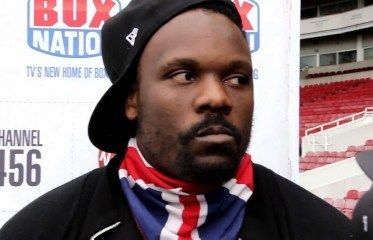 Big-hitting heavyweight Dereck Chisora will now headline a multi-title show at Wembley Arena on Saturday 20th July after promoter Frank Warren announced today that he has rescheduled the show from Saturday 15th June.

The exciting and controversial Londoner had agreed to face the unbeaten Deontay Wilder, but the American was recently arrested for battery for allegedly strangling a woman that has meant he is unable to travel outside of the US.  Because of Wilder’s arrest, this has caused Warren to delay the show by five weeks and offers have been made to heavyweights Tyson Fury, Manuel Charr and Fres Oquendo.

“I’ve had to postpone the show by five weeks because of the problems encountered with Wilder’s arrest after we were informed that he was OK to fight Chisora on the original date.  The postponement to July 20th will allow time to secure an opponent for Chisora.  It’s a value for money show with a cracking fight between unbeaten champions Frankie Gavin and Denton Vassell plus the fast rising unbeaten star Paul Butler, backed up with a top quality undercard.” Said Warren.

Chisora, a former British and Commonwealth champion, is gunning for a second world title shot after giving the WBC World Champion Vitali Klitschko his hardest challenge in recent years in February last year despite losing on the judges’ score cards in Germany in his first attempt.

He came straight back into a domestic blockbuster against rival David Haye last July at West Ham United’s Boleyn ground in front of 30,000 fans – the biggest boxing event of 2012 – and despite a thrilling shootout and the most entertaining domestic heavyweight fight in the last 20 years, he was stopped in the fifth round.

The Finchley star returned to action last month stopping tough Argentine Hector Alfredo Avila at Wembley Arena in nine rounds and is aiming to fight regularly and impress as he works towards a fight against WBA, IBF and WBO World Champion Wladimir or a rematch against Vitali.

“I just want to fight again and I’m hungry for another world title opportunity.  I’m confident that I have all the tools to beat Wilder and it’s a shame I can’t show it this time, but sooner or later we will clash and I will knock him out.  I’m concentrating on my next fight and whoever is in front of me on July 20th is going to take a beating.” Said Chisora.

Chief support on the card sees the highly anticipated and potentially explosive domestic showdown between unbeaten champions Frankie Gavin and Denton Vassell.  Gavin, the British Welterweight champion from Birmingham, puts his title on the line against his Manchester rival Denton Vassell who holds the Commonwealth belt.

Paul Smith’s rematch against Tony Dodson for the British Super-Middleweight title, which was originally announced to take place on the card, will now headline a new show promoted by Warren to take place on Friday 28th June at the Liverpool Olympia.  Full details of the card will be announced shortly on a separate press release.

One of Britain’s hottest and most exciting young prospects, unbeaten Ellesmere Port’s Paul Butler, will get to show off his incredible talent twice in a month when he features first on the Smith-Dodson undercard in a challenge for the Vacant WBO Intercontinental Super-Flyweight title.  Providing Butler, who also holds the British and Commonwealth titles, comes through unscathed he will then feature on the Wembley Arena card as originally announced.

Tough and unbeaten Irishman Gary O’Sullivan has been added to the show and he will defend his WBO International Middleweight title as he targets a world title.  O’Sullivan has fought and won twice before in London and captured the title last year defeating Manchester hard Matthew Hall at West Ham United’s ground.

Unbeaten London super-middleweight star Frank Buglioni continues his meteoric rise and features in an eight-round contest on the undercard as he targets a first title shot.  The hard-hitting 24-year-old made it six KO’s out of eight fights with his third round KO of Darren McKenna last time out at Wembley Arena.

Members of the public who have already purchased tickets will still be valid for the new date.  For a refund please go to your original point of purchase.

These are the action-packed Frank Warren Promotions shows coming up:

Plus a further big show to be announced