A resurgent Stephen Foster Jnr, arose from his recent ring inactivity to dramatically stop Levan Kirakosyan winning the European super-featherweight title in Bolton on Saturday night.
.
The Salford-born fighter knocked-out Kirakosyan in the 3rd round with a peach of a left hook bang on the chin, timing the shot to perfection. Kirakosyan got to his feet at the count of eight, but on unsteady legs and the referee Adrio Zannoni decided the French-based Armenian was in no fit state to continue in the fight.
.
Kirakosyan has previously had good success on these shores, stopping Scott Lawton and Carl Johanneson twice and with the reputation of being a big puncher. But Foster looked strong from the beginning and box very well, although Kirakosyan shown his power early, shaking Foster to his boots in the first.
.
Foster kept his composure and boxed well behind a tight defence using a good jab and looked to be just in control of the contest fighting on the front foot. Kirakosyan, sustained a cut next to his nose by the end of the first round.
.
Kirakosyan, had more purpose to his work in the second and his better work had Foster looking to hold at times, but come back with his own good shots to keep a foot hold in the fight.
.
At the start of the third Kirakosyan was looking to press the fight to Foster and again landed good shots. Foster seemed to look off balance after a good right hand by Kirakosyan and the momentum saw both stumble to the canvas.
.
Then as the referee called them both together to resume the fight, that is when Foster neatly stepped to his right and landed a beautifully timed crunching left hook, that spelled the end of the night for Kirakosyan and a new dawn in the career of Foster has the new European champion.
.
“After all the training and missing my family and kids, I’m glad it’s paid off,” Foster told Sky Sports afterwards.
.
“We had a game plan, but we didn’t think he was going to go right early. We thought he might have ran out of gas a bit.
.
“He was trying to bowl me over, I could just see openings and threw the left hook – and goodnight. I can’t believe it.”
.
On the undercard, Anthony Crolla claimed the vacant English super-featherweight belt with a victory over Andy Morris in the British fight of the week.
.
In competitive match-up of the two Manchester fighters, this derby contest lived up to all the pre fight promise and more, and could have been for more than the English strap alone.
.
Morris had been the better of the two in the early stages and led by two, three and six rounds respectively by the three ringside. But Crolla, from North Manchester was always in punching range and his tactics of boxing on the front foot and pressuring Morris paid off, has he impressively stopped the South Manchester man in the seventh.
.

.
Crolla’s (19,2 7KO’S) who’s career has been turned around since joining British coach of the year Joe Gallagher. A former ABA champion, Crolla came into the pro ranks with rave reviews and his future seemed destined for success, before he came unstuck in his 9th fight, losing on points to Youssef Al Hamidi. He later went onto avenge that loss.

.
After five good comeback wins, Crolla was matched in a British Super Featherweight Title Eliminator against the current reigning champion Gary Sykes. Crolla was outboxed over 10 rounds and lost the fight 97-94 on the refs card.
.

Crolla then decided to join Gallagher’s camp and got his hunger and desire back for the game and responded with an impressive win over his hero and former world title challenger Michael Brodie..

Now unbeaten in 6 fights since the loss to Sykes, he has put himself firmly back in contention for a shot at the British title and the chance to again avenge the only other loss on his career against the unbeaten Dewsbury champion Sykes.
.
Gallagher, the man responsible for John Murray’s success and rise through the world boxing rankings, has moulded Crolla’s already good boxing skills and nous, into a compact, accurate and collective fighter, somewhat in the vain of John Murray himself.
.
The camp is a hot bed of boxing talent and Gallagher shows a real eye for detail in his fight strategies and his enthusiasm and love of the sport rubs off onto his boxers, who are now repaying him with punch perfect displays

“Joe came up with a great game plan, like he always does and I followed the game plan.” said Crolla.
.
“We new things at times wouldn’t go our way, but I knew Joe said to me,listen Andy’s ready for going here, if you cant see it you need to go Specsavers on Monday, so I new he was ready for going and it was a matter of time before I got him and once that body shot landed, there was no way I was letting him off the hook” The new English champion added.

Paul McCloskey retained his European light welterweight title with a seventh round stoppage over Scotlands Barry Morrison in Letterkenny, Ireland.

.
The impressive unbeaten McCloskey (right) dropped former British champion Morrison in round five, before finishing off a successful night with a right left combination at 1:28 of round seven.
.
.
Paul McCloskey took another step towards a world title shot when he stopped Barry Morrison in the seventh round at the Aura Leisure Centre in Letterkenny on Saturday night.
.
European light-welterweight champion McCloskey, ranked four in the world by the WBC, had dropped the Scot in the fifth round with a right hand before a left two rounds later sent Morrison sprawling along the ropes and onto the canvas, leading referee Mark Greene to immediately call a halt.
.
McCloskey said: ‘I believe I’m ready for anyone in the world right now and if I could get a world title shot next I would grab it. I would love a fight WBA champion Amir Khan.
.

‘I’m so pleased with my performance. Barry’s a hard, hard man and I just sickened him, I broke his heart. The crowd was amazing and the crowd pushed me on.’ said McCloskey.
.
On the undercard. Unbeaten lightweight Andy Murray outpointed John Nolasco over ten rounds. The bout was scored 100-91. 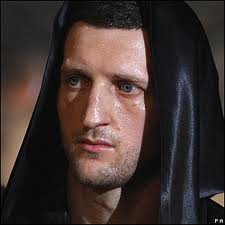 Former world champion Carl Froch says he may consider a move up to light-heavyweight in the future, squashing claims he was thinking about quiting after the Super Six tournament.

.
Froch is concentrating all his efforts on winning back his WBC super-middlweight title against Arthur Abraham in Helsinki on November 27.
.
But he hasn’t ruled out moving up a weight, perhaps six months down the line.
.
“A move up to light-heavyweight might suit me,” said Froch. “I would pack a punch with those extra pounds.”
.
When Froch beat Jean Pascal to lift the WBC belt in Nottingham, he promised the tough Canadian a re-match.
.
Pascal has since gone on to win the WBC light-heavyweight title and has a fight with the legendary Bernard Hopkins in the pipeline.
.
“Yes, I would like to fight Jean again. We spoke about it three weeks ago.” said Froch. “We had quite a battle last time, but I think I have got the measure of him.”
.
But Froch has ruled out any chance of a domestic showdown with highly-rated British and European champion Nathan Cleverly, who has stopped his last seven opponents.
.
“He is not a bad fighter,” said Froch. “But he has to establish himself more and get more fights under his belt before he steps up a class.”
. 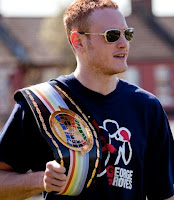 .
The London super-middleweight will put his belt on the line for the first time at the York Hall, Bethnal Green, on October 30 – live on Saturday Fight Night.
.
He was scheduled to take on Carl Dilks before he opted to take on James DeGale on the recent Magnificent Seven card, but Hayemaker have now confirmed the tough Ghanian as Groves’ new opponent.
.
“Toney is the fight I wanted in the first place, the only reason we looked to get a UK-based fighter was for publicity reasons and also to force my way into this British title mix,” he told Skysports.com.
.
“Toney has an impressive record, he has been in with good company and only come unstuck when facing opponents of the highest level.
.
“He is the sort of opponent who will bring the best out of me, and serve me well in the long run. I’m looking forward to a tough challenge.”
.
Toney was a known puncher at middleweight and has stopped 21 of his 24 victims early. He has only lost three times in 28 fights and 10 years as a pro.
.
Two of those came back-to-back; against current IBF world champion Lucien Bute in eight rounds in September 2006 and Roman Karmazin – who has just held IBF middleweight boss Sebastian Sylvester to a draw – four months later.
.
But he has only boxed three times since in low-key affairs in Ghana and this will be his first fight in Britain. – For ticket information go to www.georgegroves.com
.

Frank Warren who said he Initially had reservations about Dereck Chisora fighting Wladimir Klitschko for the heavyweight title, has started to believe after talking with the silver tongued ‘Del Boy’ that he infact can win the fight!

.
“Del Boy has only had 14 fights, and Klitschko is number one in the world. But after discussions with Derek I’m coming round to the idea.” said Warren.
.
“Not only does Chisora really want the opportunity, I’m beginning to believe that he can win it.” he added.
. 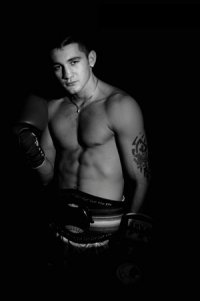 Nathan Cleverly has been named Best Young Boxer of the Year by the Boxing Writers’ Club.
.
The 23-year-old, from Wale’s who added the European light-heavyweight title to his British belt in February before graduating from Cardiff University in the summer, is unbeaten in 20 fights and closing in on a world title fight.
.
Cleverly will receive the Geoffrey Simpson award at the Boxing Writers’ annual dinner on October 26.
.
“I’m am delighted and honoured to have won,” said the Cefn Forest fighter.
.
“Britain has some of the most knowledgeable journalists in the world when it comes to boxing, and their backing is a terrific boost.
.
“Now I have to repay their faith by winning a world title.”
.
By Chris Maylett